Spencer Pigot revving up to 'be a force' in IndyCar

Pigot is still looking for his first top-10 finish of the season after finishing 11th at St. Petersburg and Austin, 17th in Alabama and 18th at Long Beach.

Spencer Pigot revving up to 'be a force' in IndyCar

Detroit — Spencer Pigot enjoyed his day at Comerica Park on Thursday, throwing out the first pitch on Detroit Grand Prix Day before watching the Tigers defeat the White Sox, 9-7.

Pigot, 25, is part of a growing number of young American IndyCar drivers who will be competing in next month’s Indianapolis 500 before they move to the Motor City to compete in a doubleheader — races held on June 1-2 — on Belle Isle.

Pigot feels right at home with Ed Carpenter Racing and he should. He's running in his fourth season with ECR but more importantly for the second year on a full-time basis.

And Pigot knows he has the equipment to finish on the podium after finishing second at Iowa Speedway last year. He has two 10th place finishes on Belle Isle and is looking forward to the next couple of months with the running of the Grand Prix of Indianapolis on May 11 and the Indy 500 on May 26.

“Coming back for my second full season with Ed Carpenter Racing is nice,” Pigot said. “We know what we want from each track. We’ve got a year of experience with this aero kit, so we’ve spent a lot of the offseason trying to develop and focus on areas to improve, and I think for the most part we’ve done a good job with that. I think we’re stronger this season. We haven’t really had a good race yet, but for sure the pace is stronger and it’s just another year of working together.”

Pigot has the rare opportunity to work for a boss who is also a teammate. Carpenter competes part-time and specializes on oval races like the Indy 500, where he started from the pole in 2013 and 2014 and finished second to Will Power in last year’s Indy 500.

“It’s a unique relationship,” Pigot said of working for Carpenter. “I guess I’m the only guy, me and my teammate Ed Jones, where our boss is also our teammate. It is unique, but at the same time I think it’s been a really beneficial relationship for me.

“When Ed’s in the car it’s great to be able to compare notes and discuss what I’m feeling and what he’s feeling and how we can go faster. And, when he’s not in the car since he’s been around for quite a while now, he’s really good at managing his drivers, managing his crew and trying to get the most out of us.”

While Pigot is in his second full season in the series, he knows job security comes with solid results. He hopes to get better finishes as the season moves on.

“I think you’re always fighting for your job and the only job security is to perform and do well," he said. "That’s always the focus every weekend, to be as fast as we can and to finish as high up as possible because you know that there’s lots of people that would be dying to be in my position.” 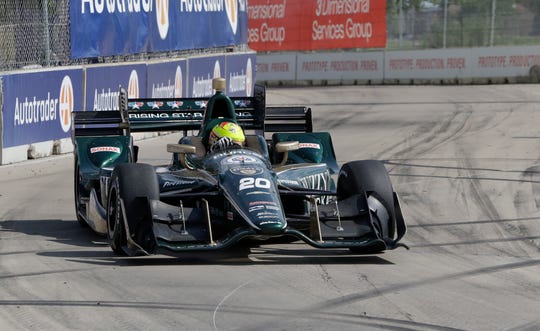 Pigot is still looking for his first top-10 finish of the season in the No. 21 Chevrolet after finishing 11th at St. Petersburg and Austin, 17th in Alabama and 18th at Long Beach.

“I think we can be happy with the pace we’ve showed at most races so far,” Pigot said. “We were in the Fast Six at Barber (Alabama) and could have been there in Austin if qualifying hadn’t been interrupted with a red flag, so for sure that’s encouraging but unfortunately we’ve had a lot of issues. We’ve had issues in pit lane twice that have ruined our races.

“Last weekend at Long Beach I thought we actually had really good pace in the race. We had overcome our issues that we had earlier in the weekend, but on the first lap I was caught up in people stalling and crashing in front of me and went a lap down right away. So it’s been a little frustrating, but I think we definitely have what it takes to be a force throughout Indy and the rest of the season.”

Pigot qualified on the second row for last year’s Indy 500 but had trouble on pit road — getting a penalty for speeding — and finished 20th. He is looking forward to the next couple of months with double points for the Indy 500 and double points available with the doubleheader on Belle Isle before the series moves on to Texas Motor Speedway for yet another oval race.

“It’s a really important time of the season,” Pigot said. “We really need to have a good month of May in both races, the GP (Grand Prix of Indianapolis) and the 500 is obviously double points so that can be big. Then you come right here to Detroit and from there right to Texas so it is intense and we could really use five or six really good races.

And on his feeling of competing on Belle Isle?

“It’s very unique,” Pigot said. “There’s a lot of fast corners for a street course, which you don’t always get. There are some slow sections, very bumpy, very technical so it’s a challenge for the drivers, a challenge for the engineers to get the car to work well in every corner because they're so different. And you know you have two races back-to-back so it’s really tough and I enjoy the challenge.”

No doubt, Pigot would love to get to Victory Lane this season and wouldn’t mind it happening in the Indianapolis 500 like fellow Americans Ryan Hunter-Reay (2014) and Alexander Rossi (2016) have in the past five years.

And Pigot would like to one day hoist the series championship trophy like American Josef Newgarden did for Team Penske in 2017.