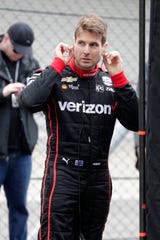 Indianapolis — Will Power got his first real glimpse at IndyCar’s new debris deflector Wednesday. He is still getting used to the small piece on the front of his race car.

Power, the defending Indianapolis 500 champion, Detroit Grand Prix winner and 2014 series champion was one of nearly two dozen drivers who spent Wednesday testing the safety device designed to reduce the risk of head injuries in the series that features open cockpits.

“You notice it,” the Australian driver said during a rain delay at Indianapolis Motor Speedway. “But you really need to be in it at top speeds, following cars. Anything you can do to protect the head is a good thing.”

Series officials have spent years trying to make racing safer, but Justin Wilson’s death in August 2015 reignited the discussion about head safety in open-wheel racing. Wilson, a popular English driver, died from injuries sustained when he was hit in the head by flying debris from another car at Pocono.

IndyCar engineers worked on a so-called halo device, similar to the one adopted by Formula One in 2018, but shelved it because it couldn’t be fitted on the car and there were concerns about impeding drivers’ sight lines.

Scott Dixon and Josef Newgarden also worked with a clear windscreen last year, but IndyCar president Jay Frye said series officials did not get the desired results. That project continues.

For now, IndyCar has opted to go with a 3/4-inch-wide piece made out of titanium, bolted to the car just in front of the cockpit.

Engineers, Frye said, have been fine-tuning this piece since 2012 and it will make its race debut May 26 when the series holds its marquee event – the Indianapolis 500. The deflector is expected to be used the rest of this season.

Dixon, the reigning series champion, reported no troubles after working with it on a simulator.

“If debris comes toward the driver, this will deflect it away,” Frye said. “But we wouldn’t put it on the car if it was not vetted.”

Debris could still go airborne or break into smaller, still dangerous pieces. Some might even fly into the stands or land back on the track.

“You do the tests, you pass all the tests, there are a million different scenarios of what could possibly happen,” Frye said. “This we know gives us a much better likelihood of having a good outcome.”