The Detroit River racecourse poses an ever-changing set variables, including wind and current. Those who adapt best have the edge. 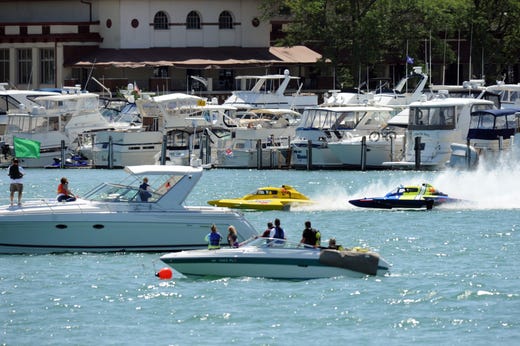 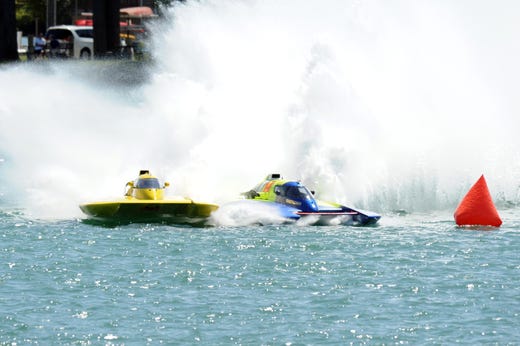 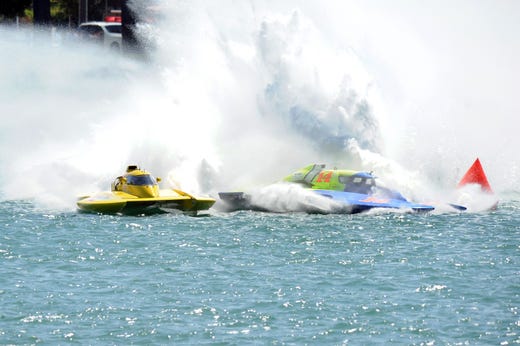 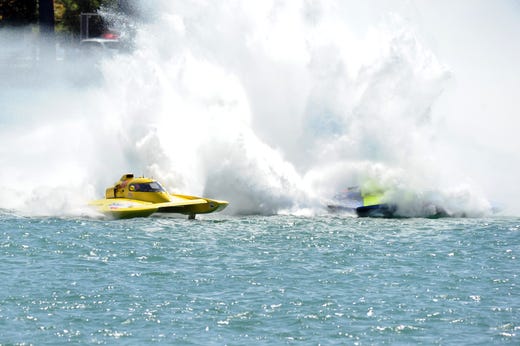 Hydroplane driver Donny Allen, foreground, recovers from his spinout with Andrew Tate and is able to pass Eric McKenna and finish in third place during a H350 heat at Detroit Hydrofest. Jose Juarez, Special to Detroit News
Fullscreen 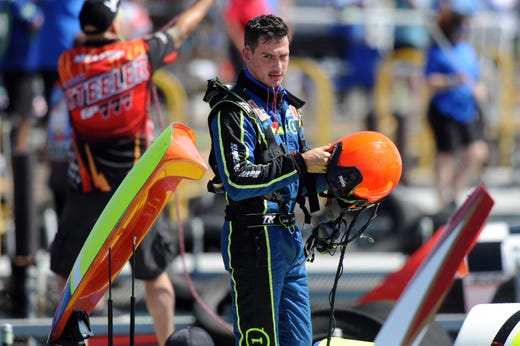 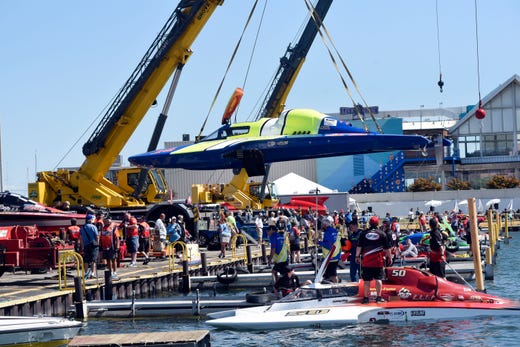 The hydroplane of driver Andrew Tate is lifted up by a crane and onto the dock for repairs during Detroit Hydrofest. Jose Juarez, Special to Detroit News
Fullscreen

Fans fortunate to get a seat on the top floor of the tower have a clear vantage point to watch the Detroit Hydrofest activities. Jose Juarez, Special to Detroit News
Fullscreen 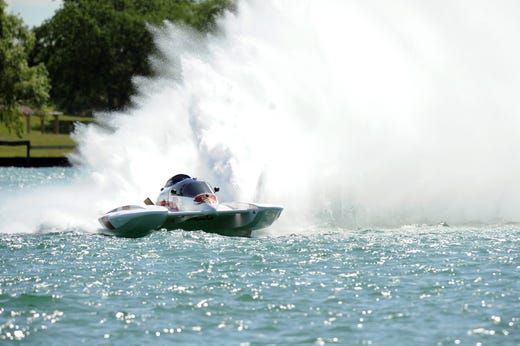 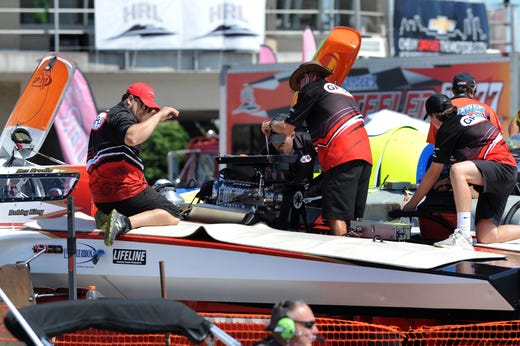 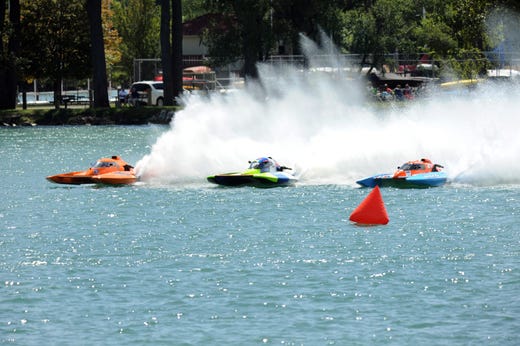 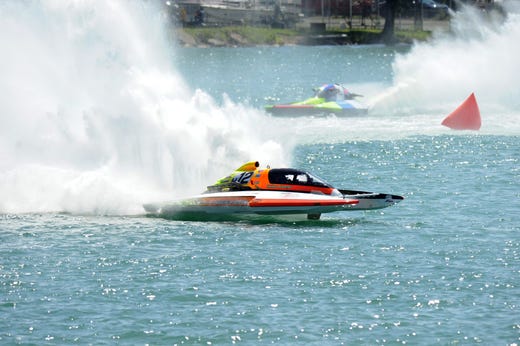 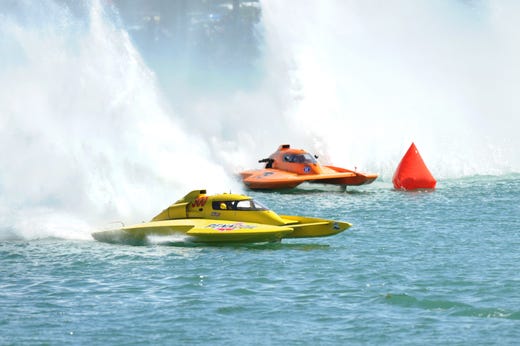 Detroit — Andrew Tate isn’t concerned with having the fastest boat.

During Saturday’s heats of this weekend’s 2019 Spirit of Detroit Hydrofest on the Detroit River, the 2018 Gold Cup champion and Walled Lake native wasn’t even concerned with winning — even though he did twice.

He was, however, concerned with gathering as much information on his boat, the course and his competitors ahead of Sunday’s winner-take-all finals: The art of the adjustment.

There’s an intricacy to hydroplane racing that expands beyond what one might see at, say, a stock car race. The conditions — wind, water current — are ever-changing, and usually, it’s those who adapt best have the edge.

“If you can tweak your boat throughout the weekend and make it as fast as possible for the winner-take-all Sunday,” Tate said, “that’s what you’re trying to do.”

The course is a quarter-mile longer than most and its two turns are drastically different. A seawall that reverberates waves back into the action causes conditions to drop as racers speed up.

“It makes it tricky in, how do you want to set your boat up? Which corner do you want to get through better?” Tate said. “Where do you think you can gain your biggest advantage?”

Even for an accomplished hydro-racer like Tate, an 18-year racing veteran, this can be a bit of a process, but attention to detail is nearly always rewarded.

The fourth-generation hydroplane driver spun out on the course’s Roostertail turn during Saturday’s first Grand Prix heat, and while hitting the same turn while fighting for position with Hearn Motorsports teammate Donny Allen during an H350 heat nearly an hour later, hit the turn with ease and took first while Allen spun out and came in third.

During his next H350 heat on Saturday, he got the best of Dylan Runnes, another longtime friend and Michigan native, at the same turn. Runnes is assuredly formulating a plan to punch back in Sunday’s winner — it’s part of the adjustment procedure.

“I watch my competitors very closely — where they’re making mistakes, and where I can capitalize on it.”

Here’s where things can get tricky: Runnes finished first in the initial set of H350 heats, but after the run, decided to make some wing adjustments. One of those wings, running on an electrical actuator, went dead. While he originally hoped the wing adjustments would help with some of the course’s groundswells, it actually did the opposite.

It’s nobody’s fault, really. The crew identified that Runnes need to make a change and it simply didn’t pan out. Still, this is undoubtedly part of the trouble: Each race is high-powered and just three laps. A lot can go wrong between the boats departing for and returning from action, making it impossible to notice and account for everything — though they certainly try.

James Geblein, a crew member on both of Tate’s boats, said that in between heats, the crew goes through “every nut, bolt, skid fin, rudder, prop, every fitting on the engine.”

Because of this, there’s a certain element of trust that must be established.

“I’m trusting in them that they’re giving me the best piece of equipment,” Tate said. “They’re trusting in me to deliver once it gets out onto the racecourse.”

Through half of this weekend’s festivities, Tate is making good on that promise.