Saturday's motor sports: Reddick stretches gas tank to a win in the desert

Saturday's motor sports: Reddick stretches gas tank to a win in the desert 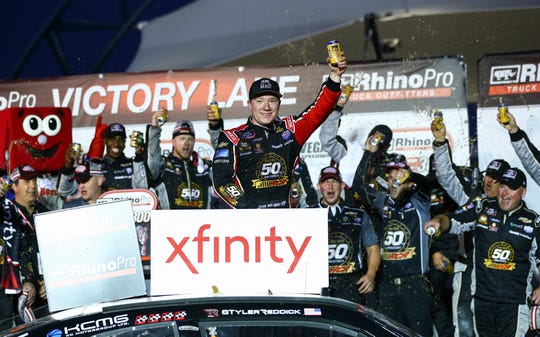 Christopher Bell had the most dominant car but Reddick’s Richard Childress Racing team gambled on fuel strategy to beat Bell for the win. The reigning series champion has five wins this season.

Reddick had to save as much gas as possible over the final stretch and the conservation mode allowed Bell to close the gap. Bell and his Joe Gibbs Racing team were likely hoping Reddick ran out of gas, but he picked up his pace over the final four laps as Bell closed in.

Reddick made it 70 laps on his final tank of gas.

“It was stumbling,” he said of the final few moments of the race.

Bell wound up second and wondered if he could have won his seventh race of the season if he had pushed harder at the start of the final run, when he had a full tank of gas. He led a race-high 154 laps.

“It’s the second time this year we got beat by circumstances,” Bell said. “Very, very disappointing.

The race was the final event before the playoffs begin for NASCAR’s second-tier series, but the 12-driver championship field had essentially been set on points prior to the green flag. Reddick needed just 11 points to claim the regular-season title, with Bell the only driver mathematically eligible to catch him.

“What I wanted to do was get that locked up before we went and tried to win the race,” Reddick said of the regular-season title. He was presented with the trophy, then stood by and listened team owner Richard Childress said Reddick’s driving style reminds him of Hall of Famer Cale Yarborough.

“We ain’t done yet. We got to go to Homestead and get another trophy,” said Reddick, who won last year’s title driving for JR Motorsports.

The Xfinity Series eight-race postseason begins next week at Richmond Raceway in Virginia.

Stewart-Haas Racing surged into the opening race of NASCAR’s playoffs with a Clint Bowyer-led sweep of the front two rows at Las Vegas Motor Speedway.

Joe Gibbs Racing, meanwhile, struggled across the board in its preparation for Sunday’s opening playoff race. While SHR put its four Fords in the top four slots, the Gibbs Toyotas qualified in the middle of the pack with Erik Jones the slowest of the 16 playoff drivers.

Gibbs as an organization is considered the favorite in NASCAR’s 10-race run to the Cup championship, and the poor qualifying Saturday was as surprising as Bowyer’s pole-winning run. Bowyer had to claw his way into the playoff field, is seeded 15th, and last won a pole 12 years ago to the day at New Hampshire.

He’d gone 431 career starts between poles, and now has three for his career.

“I did not see this coming. This is a surprise to me,” he said. “If I just sat on the pole, that car is obviously a bullet.”

The entire SHR fleet was fast, with Daniel Suarez qualifying second, followed by Kevin Harvick and Aric Almirola. Suarez is the only SHR driver not in the playoffs.

But some of the playoff participants said it will take one long run in Sunday’s race to learn if SHR is truly fast, or if the organization focused specifically on qualifying to earn valuable track position.

“It is pretty obvious when you look at the rundown of who has speed and who is dialed for handling,” said reigning series champion Joey Logano. “If the Stewart-Haas cars have both, we are all in trouble. It is a trade-off when you come to these places. It is really hard to have both. You can’t have both. You have to make your bed and lay in it.”

Kurt Busch, a Las Vegas native, qualified fifth in a Chevrolet for Chip Ganassi Racing. Chase Elliott was the next highest playoff driver at eighth in his Chevrolet for Hendrick Motorsports.

Denny Hamlin at 13th was the best of the Gibbs contingent, while Kyle Busch was 20th, Martin Truex Jr. 24th and finally Jones in 26th.

“It’s just frustrating, you hold it wide open and you hope to go fast, but it’s not where we want to be,” Jones said.

Logano qualified 22nd, four spots behind teammate and defending race winner Brad Keselowski, as Team Penske also struggled in qualifying because it placed its emphasis on handling over speed.

“We should know about 20 laps in who really has what,” Keselowski said.