Allmendinger raced to his first NASCAR victory in five years Saturday in the Xfinity Series race on The Roval at Charlotte Motor Speedway. 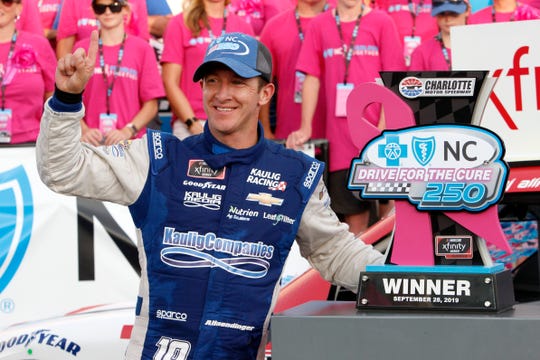 Concord, N.C. — AJ Allmendinger raced to his first NASCAR victory in five years Saturday in the Xfinity Series race on The Roval at Charlotte Motor Speedway.

Allmendinger has transitioned this season from full-time racing to the broadcast booth, but agreed to drive a handful of Xfinity Series races for Kaulig Racing. He’s been competitive in his five starts and delivered the win Saturday.

It was Allmendinger’s first victory since he won in a Cup car in 2014. His last Xfinity Series victory was in 2013, and he’s now has three career Xfinity wins.

“The last few years were rough,” Allmendinger said of his firing at the end of last season from JTG-Daugherty Racing. He then thanked Matt Kaulig for giving him this partial opportunity to still race.

“He asked me to come in and help him build his team, and I can’t thank him enough.”

Kaulig met him in victory lane.

Allmendinger led 20 of the 67 laps in the win for Chevrolet. His car still needed to pass post-race inspection, something it failed to do in two of his previous four races with Kaulig.

Cole Custer finished eighth and joined Christopher Bell as two drivers already advanced into the second round of the playoffs.

After collecting the checkered flag from the flagman, Allmendinger entered the crowd, climbed the steps and found a young girl to give the away the flag. He then posed for selfies with fans before heading to victory lane.

Hamilton is bidding for his first win since the summer break and his Mercedes team is often the dominant force in Russia, having won all of the five races staged here.

Hamilton is 65 points ahead of teammate Valtteri Bottas in his quest for a sixth world title, but looks to have his work cut out against Leclerc.

Alex Albon crashed out of qualifying. The London-born Thai spun at the slow-speed Turn 13 before slamming into the barriers. The driver confirmed he was unhurt.

Earlier Saturday, McLaren said the team will be powered by Mercedes from 2021, ending its association with Renault at the end of the 2020 campaign. The long-term agreement will run until at least 2024.