Daytona Beach, Fla. — NASCAR driver Ryan Newman is awake and speaking with family and doctors a day after his horrific crash on the final lap of the Daytona 500.

Roush Fenway Racing released an update on its driver Tuesday, about 20 hours after Newman’s car slammed into the wall at nearly 200 mph, flipped, got T-boned by another car, flipped several more times and skidded to a halt in flames. 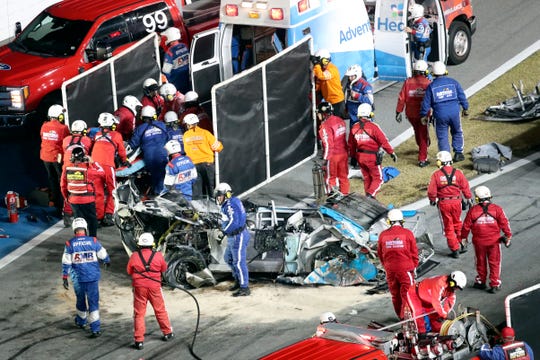 Everyone watching feared the worst Monday night and had to wait nearly two hours to learn that Newman’s injuries were not considered life-threatening. The latest update was more good news for the 42-year-old driver and 2008 Daytona 500 champion.

Newman turned hard into the wall after getting bumped from behind by Ryan Blaney a few hundred feet from the finish line. Newman’s No. 6 Ford then flipped onto its roof, where he was helpless as he was walloped in the driver’s side by another car at 190 mph.

Newman’s car continued to skid upside down along the speedway and crossed the finish line in flames as safety crews hurried to snuff out the fire and cut Newman loose. It took about 8 minutes for workers to roll his car rightside-up, and medical personnel used black screens to block spectator views as Newman was placed in a waiting ambulance and taken to Halifax Medical Center.

A sense of relief spread across Daytona International Speedway. There has not been a fatality in NASCAR’s elite Cup Series since Dale Earnhardt died in a crash on the final lap of the 2001 Daytona 500.

Earnhardt died instantly when he hit the wall at Daytona International Speedway in what is considered the darkest day in NASCAR history. It triggered a chain reaction of safety improvements as the sanctioning body put a massive emphasis on protecting its drivers.

So it was jarring when Newman went airborne on the final lap of Monday night’s rain-rescheduled Daytona 500 — a grim reminder that racing cars at 200 mph inches away from other drivers will never be safe.

An industry so accustomed over the last two decades to seeing drivers climb from crumpled cars with hardly a scratch held its breath as it took nearly 20 minutes for Newman to be removed from the car. It was another two hours before NASCAR said Newman was in serious condition at a hospital with non-life threatening injuries.

This was a scare NASCAR has dodged for 19 years. Carl Edwards sailed into a fence at Talladega in 2009, climbed from the burning wreckage and then jogged across the finish line to complete the race. Kyle Larson in a 2009 Xfinity Series race flew into the Daytona fencing and walked away unscathed even though the front half of his car had been completely torn away.

Kyle Busch crashed into a concrete wall at Daytona the day before the 500 in 2015. He broke both his legs and still was able to get himself out of the car. Five months later, Austin Dillon ripped out a section of Daytona fencing, landed upside down in a destroyed race car, and after he was pulled to safety by team members, he flapped both hands in the air for the crowd in a tribute to the signature celebration of the late bull-rider Lane Frost.

Perhaps it has created a false sense of security because so many drivers have walked away from so many accidents.

“The number one thing that NASCAR always does is put safety before competition, you’ve got to have a car that’s safe,” Hamlin said.