The 70-year-old raceway hosts return of NASCAR Cup Series, among the biggest events so far as sports makes a halting comeback from a global shutdown

Darlington, S.C. — Harold Brasington III recalls riding around the infield at Darlington Raceway as a youngster with his late grandfather, track builder Harold Brasington, watching as his granddad said hello to the likes of Richard Petty, David Pearson, Cale Yarborough and Dale Earnhardt.

The younger Brasington, 52, will see history once more on Sunday: The 70-year-old raceway will host the return of NASCAR Cup Series racing, among the biggest events so far as sports makes a halting comeback from a global shutdown forced by the coronavirus pandemic. 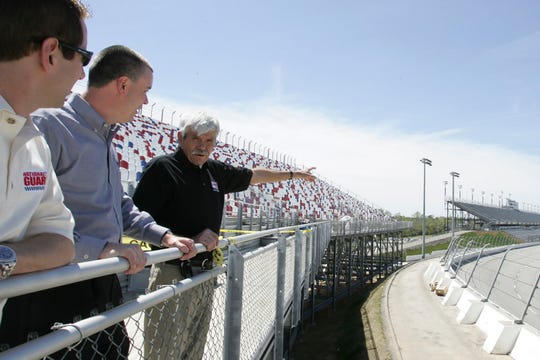 The Xfinity Series will then fire up for the first time since March on Tuesday night at the 1.366-mile, egg-shaped oval. Cup racers come back for Wednesday for a weeknight, primetime race — the kind fans have urged NASCAR to try — to cap a busy time for the “Lady in Black.”

“I think Darlington is the poster child for inspiration and luck kind of linking up together,” Brasington said.

The track hosted two NASCAR races every year from 1950-2003, including the Southern 500 on Labor Day weekend, an event considered a marquee race for the stock car series. But a push for bigger TV ratings and fancier, modern raceways — and some neglect in upkeep at the old country track — had some wondering if Darlington might join the list of shuttered, defunct Southern tracks like Rockingham and North Wilkesboro.

More: Like NASCAR, ‘walking miracle’ Ryan Newman gets a restart to savor

Instead, it has held on as NASCAR embraced its history as the oldest paved superspeedway. Since 2015, Darlington has held the circuit’s throwback weekend — back on Labor Day — with a popular celebration of NASCAR’s colorful past.

Come Sunday, that legacy will be one of hope as NASCAR powers back up.

“For us, it’s exciting that we have our chance to go out there and compete,” Kurt Busch said.

Busch was involved in one of Darlington’s most memorable moments, a last-lap, metal-crunching duel to the finish with Ricky Craven at the 2003 spring race. The two racers slid past the finish line locked together with Craven winning by two-thousandths of a second, tied for the closest finish in NASCAR history.

Darlington is perhaps best known as “The Track Too Tough To Tame” and, like all the old speedways, has its quirks. Brasington had envisioned a standard oval, but he had a problem: A local landowner didn’t want to give up his minnow pond, so Darlington was built with what is now turn four tighter than the other end of the track.

Speak with almost any driver and it won’t be long before they say of Darlington that “you have to race the racetrack.” The assymetrical corners mean drivers who spend too much time focused on their foes will undoubtedly hit the wall — and often do. 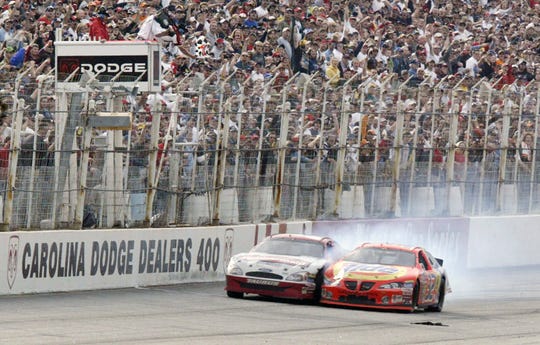 In this March 2003 photo, Ricky Craven, right, crosses the finish two-thousandths of a second ahead of Kurt Busch to win the NASCAR Carolina Dodge Dealers 400 at Darlington Raceway in Darlington, S.C. (Photo: Alison Sidlo, Associated Press)

That’s why Darlington’s list of champions reads like the NASCAR Hall of Fame. Pearson heads things with 10 victories with with Earnhardt right behind at nine. Jeff Gordon has seven.

Bill Elliott won “Winston Million” bonus prize at Darlington in 1985 for the driver to capture three of NASCAR’s four crown jewel races. Yarborough famously went over the wall here in 1965 in a horrific-looking crash. He holds the track record with five Southern 500 wins.

It is a long, storied history Darlington Raceway President Kerry Tharp has gladly brought to the forefront since taking the job in 2016. This year’s throwback celebration, still scheduled for Sept. 6 as the series’ opening playoff race, honors NASCAR champions.

More: 'Ready to go': Michigan's Erik Jones raring to get back on NASCAR track

First, though, comes NASCAR’s return to the track this weekend. Tharp can’t imagine a more fitting or daunting mission for his Darlington crew.

“We’re proud of that,” he said. “We know it comes with a great responsibility, but we’re up to the task.”

Brasington’s family has enjoyed their connection to NASCAR — one of Darlington’s grandstands is named for the founder — and took great pride in learning the track would host Sunday’s race.

Brasington III said when he lived in Oregon in the early 1990s, he saw a person at a grocery store with a Darlington T-shirt and the customer told him his family came to the country track for NASCAR every year.

“It brought home to me the impact that track has had on people,” he said, chuckling.

Tharp, who has worked at NASCAR since 2005, got his first true appreciation of the track from the late Jim Hunter, a racing executive and former Darlington president who told him: “You’re going to really, really think a lot of this place one day. This is a special place.”

Tharp has become a true believer.

“We might not be the fanciest or the most modern track out there,” he said. “But I think we’re the coolest.”