NASCAR will once again take center stage with the Coca-Cola 600 on Memorial Day weekend.

NASCAR’s back, showing the Cup Series has made a smooth transition of getting back to business after a 10-week break due to the COVID-19 pandemic.

Series points leader Kevin Harvick is the lone driver to earn top-10 finishes in all six races in his No. 4 Ford Mustang for Stewart-Haas Racing, with four coming before the layoff. He topped the field when racing returned by taking the checkered flag in the Real Heroes 400 at Darlington Raceway last Sunday.

On Wednesday night, Harvick returned to finish third at Darlington with Joe Gibbs Racing teammates Denny Hamlin and Kyle Busch finishing first and second. It was Hamlin’s second win of the season, joining the prestigious Daytona 500 victory to start the season.

Sure, the new norm is far different than when the drivers took the track at Daytona before a packed house back in February. This time around, drivers and crew members had to get their temperatures taken before entering the track, then walked down pit lane wearing masks and competed without fans in the stands. 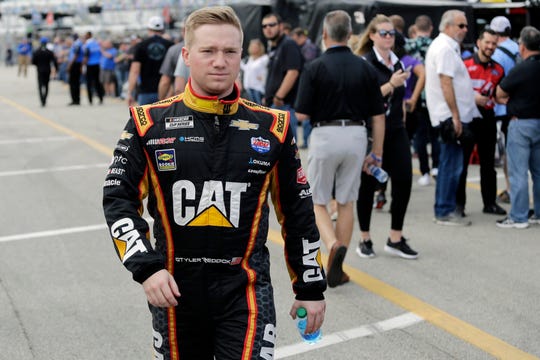 Tyler Reddick has one top-10 finish so far this season in the NASCAR Cup Series. (Photo: Terry Renna, Associated Press)

Tyler Reddick of Richard Childress Racing is thrilled to be a part of NASCAR’s return in his rookie season in the Cup Series, finishing with a solid seventh place showing Sunday in his No. 8 Chevrolet Camaro and finishing 13th on Wednesday.

No doubt, the Sunday during Memorial Day weekend was historically the best day of the year for race fans, starting with Formula One’s race in the morning at Monaco, followed by IndyCar’s Super Bowl, the Indianapolis 500, in the afternoon, and capped off by NASCAR’s Coca-Cola 600 in the evening.

NASCAR will once again take center stage Sunday (6 p.m., Fox) with the other two series still on the sidelines. IndyCar is set to return June 6 at Texas Motor Speedway. It could be July before Formula One makes its return.

“It’s awesome. This is normally a day I wake up at the crack of dawn and catch the Monaco Grand Prix, turn it over and watch the Indianapolis 500, and then either cruise over and watch the 600 on the infield with my friends or watch it at home,” Reddick, 24, said.

He won one race and finished second in another at Charlotte Motor Speedway last year in the Xfinity Series on the way to repeating as series champion.

Sunday will be Reddick’s first time racing at the Charlotte 1½-mile track in the Cup Series.

“I’m excited for it,” Reddick said. “It’s a huge weekend. It's great that we’re going to be able to go out there and race, put on a show and still do our thing considering all things. Hats off to NASCAR and everybody involved to make that possible, to still be able to run one of our biggest events, the Coca-Cola 600.”

After Toyota drivers failed to lead a lap in Sunday’s return event, Hamlin made sure history wouldn’t repeat itself. He earned the win for JGR in his No. 11 Toyota Camry with Busch putting himself in the midst of controversy by sending second-place driver Chase Elliott into the wall with 27 laps remaining while forcing a caution. The rains then hit the area and ended the race.

Elliott was on Hamlin’s bumper on the outside when Busch — driving on the inside — attempted to slide behind Elliott while still staying in front of Harvick. Busch hit the left bumper of Elliott’s No. 9 Camaro and sent him spinning.

Busch and his former crew chief Alan Gustafson, who now has that role with Elliott, had a discussion following the race. Busch admitted it was his mistake during a post-race interview, adding: “Repercussions from it I’ll have down the road.”

While fans couldn’t see Elliott’s emotions since he was wearing a mask following the race, they knew he was fired up with the obscene gesture sent in Busch’s direction as Busch circled the track under caution.

So stay tuned and watch when Busch and Elliott are close on the track at Charlotte.

Also keep an eye on Rochester Hills native Brad Keselowski, the 2012 Cup Series champion who is a free agent since he is in the final year of a contract with Team Penske. He's looking for his first win in more than a year in his No. 2 Ford Mustang. His teammate, Joey Logano, matches Hamlin with a series-high two wins. 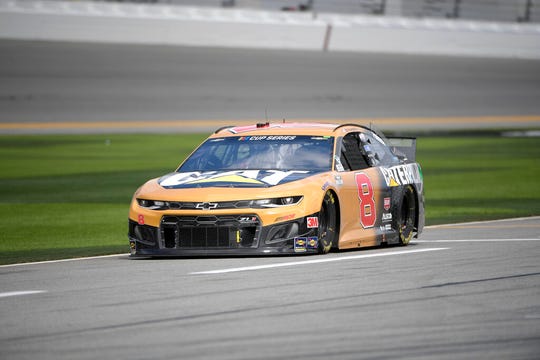 “We’re right on the bubble (for 16-member playoff) so I’m going to stay focused and try to stay inside the top 16 or go for a win. That’s going to be my focus,” Reddick said. “We probably could have had a top 10 (on Wednesday) if the race would have gone back to green (after Elliott’s crash), but we fought back from being as far back as 30th and when you’re running against the best of the best you’re not going to pass them all.

“The Xfinity Series cars drive a lot differently. You can take a good car and a good team and take a restart at the bottom in the Xfinity Series, but these (Cup) cars have a lot of downforce. It’s just a game of giving yourself the most downforce and taking as much downforce as you can away from the cars around you. The top line prevailed really, really strong at a place like Darlington and it’s probably going to prevail really strong at a place like Charlotte. It’s going to be a long race. You have to be smart and you can’t afford to give up five or six spots on every restart or you’re going to be fighting an uphill battle all day.”

While fans couldn’t see the drivers emotions due to the masks, they could see Hamlin’s after the race when he put on a mask with a smiling face while still sitting in the car.

“I basically had the idea right after Sunday and to get it all done by Wednesday took a feat,” Hamlin said during a media videoconference call Thursday. “We wanted to actually create different types of emotions. I’m sure there’s plenty of resting faces as they say that I usually have on my face that they can take a picture of and we can put it over. I’ve had good luck with it, but I don’t know if I’ll bring it back.”

Hamlin is thrilled to get right back in his car and go racing again. After Sunday’s race, the drivers will go back to Charlotte, which is the hometown of many teams’ race shops, and race again Wednesday night.

“It’s good,” Hamlin said. “When you’re winning, it means you’re doing some things right. I think being able to go right back to a race track three or four days later, it allows you to keep that momentum for an extended amount of time when it comes to races. I like it. I’m voicing out loud here that this is something I’d like to see for years to come, to have (multiple) races in a week. This is something that can really help our sport.”

Reddick loves interacting with his crew members, something he can no longer do at the track due to NASCAR’s new protocol where drivers couldn’t see their cars on race day until they actually climbed into them.

There was no practice or qualifying for the races at Darlington, but there will be qualifying prior to the race at Charlotte on Sunday.

“I take all my gear to the car, get in the car pretty much all by myself, so it’s been way different and because of that your body has a different feel for it and you just have to tell yourself to get ready in the race car and race. It’s all measures that we have to take and I’m glad we’re taking them because if we don’t it may mean we don’t race.”