Stoudemire averaged 17.3 points and 6.7 rebounds over five seasons with the Knicks. 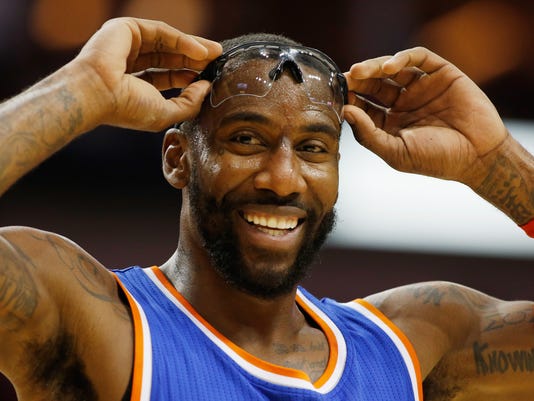 New York — Amare Stoudemire started the New York Knicks moving forward, before his injuries hastened their return to the bottom.

Now he wants to look elsewhere for a chance at a championship.

The veteran forward was waived Monday after requesting the Knicks buy out the remainder of his contract that was set to expire after this season. He will be free to sign with another team once he clears waivers.

"His time here should be marked by recognizing his effort. It was 100 percent," Phil Jackson, the Knicks' president of basketball operations, said in a statement. "As we move forward in structuring this team, we will look for players that exhibit his desire to win."

Stoudemire averaged 17.3 points and 6.7 rebounds in 255 games over five seasons with the Knicks, making the playoffs three times. He was a starter in the 2011 All-Star Game, the Knicks' first in 14 years.

"I will be forever grateful for the opportunity to contribute positively on the court and in the community. Although I leave the Knicks with a heavy heart, I wish the organization the best of luck. Once a Knick always a Knick," Stoudemire said.

Carmelo Anthony, who wanted to play for the Knicks in part because Stoudemire had signed there in 2010, learned the news Sunday after playing in the All-Star Game.

"Amare brought something back to New York that New York was kind of missing and needing for a long time," Anthony said. "When he came, he brought back some of the excitement here for the game of basketball in New York. There was hope when he came back. People started believing in the New York Knicks once again. He was the main reason for that belief and for that hope when he first got here in New York."

Stoudemire was an All-Star in Phoenix before signing a five-year contract worth about $100 million in 2010. He helped the Knicks end a seven-year playoff drought his first season, but he missed significant time over the last few years because of assorted injuries. The Knicks had to monitor his minutes since his two knee operations during the 2012-13 season.

He can still score when able to play, averaging 12 points in 24 minutes this season. So he may draw interest from contending teams before the regular-season schedule resumes Thursday.

"To see him leave, to see the situation where it's at right now, I know what he wants and you have to respect that," Anthony said. "As an athlete, as a competitor, you only want the best for your friends, your close ones. He wants to play for a championship is what I'm hearing. He wants to play for a contender. I don't think nobody should hold that away from him."