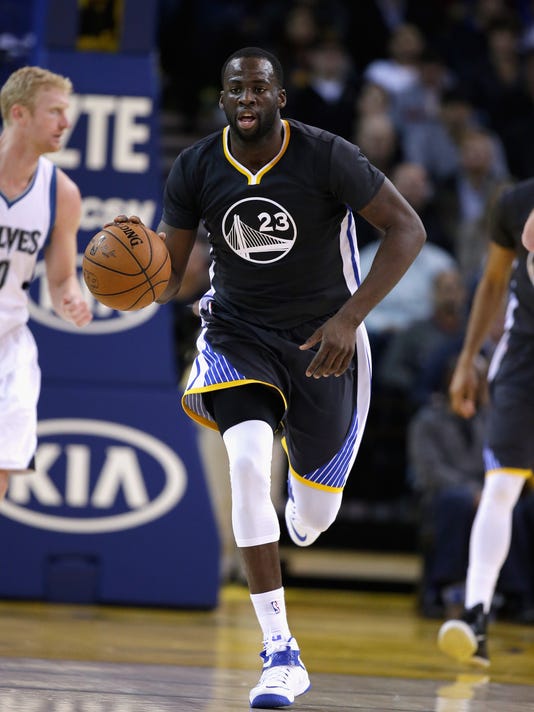 Draymond Green has mega-dollar options because he has earned them and because his contract so stipulates.

This is the way it's supposed to work for a young player who was under-drafted, has been drastically underpaid, and is now one of the most important players on a team with the league's best record.

So no one should be surprised by the recent Yahoo report that Green could be very interested in landing a huge deal in Detroit — a team with large cap room — next summer when he hits restricted free agency.

Green is a Saginaw native and Michigan State alum, and he and his representatives are naturally looking at all good options.

The Pistons, maybe at a starting salary above $15 million, are one of those possible options.

Everybody involved understands that this is the way it works.

But if you follow all this, it's almost a lock that the Warriors will match whatever he gets offered" and Green will be quite content with it.

This is not an adversarial thing, at least not right now, and it's important to emphasize that Green is a restricted free agent, which means the Warriors can match any offer.

For the Warriors, it's essentially a math problem: Can they work out the salary number with Green that works for both sides" or, if they let him get the best offer in RFA, would the numbers work if they match it?

Unless Warriors execs are misleading me, they are prepared to match any offer Green gets, no matter the number.

If Lacob is willing to pay the luxury tax for one season — and he says he is — then the Warriors can match any offer Green gets without doing a ton of salary-shedding.

Think of it as asset value: If the goal is a championship, what's the value in letting their best defensive player leave for nothing?

Who plays power forward? And what do they tell Stephen Curry after letting his favorite teammate walk in order to save money?

Remember, the value of the franchise has just about doubled since Lacob and Peter Guber took control in November 2010, the national TV revenue is about to double, and they're gearing up for a new arena in San Francisco by 2018 and a possible long run as championship contenders.

Maybe most of all, the Warriors need to keep Curry happy as he heads into the meat of his current, way-below-market-rate contract" and towards his own possible free agency in the summer of 2017.

Other than for purely fiscal conditions, there's just no tangible reason for the Warriors to let Green go.

I believe the Warriors would be fine with matching any deal that keeps Green on their team vs. letting him go for nothing, short-term, long-term or whatever.

And if the Warriors aren't ultimately willing to pay the tax for the first time in franchise history this summer, they can probably off-load David Lee's $15.5 million salary for next season, which would make room under the tax line for Green's presumed monster salary.

This is the price of being a good team, with very good young players who deserve huge raises, sometimes almost all at once.

If you're not willing to accept all that, you're not going to have a chance at competing for titles over a long period, and the Warriors say they are more than willing to pay the price.

With Draymond Green, they'll have every chance to prove it.