Dawson must adjust to have shot at NBA

Dawson relished the opportunity to showcase his talents at the combine.

Dawson must adjust to have shot at NBA 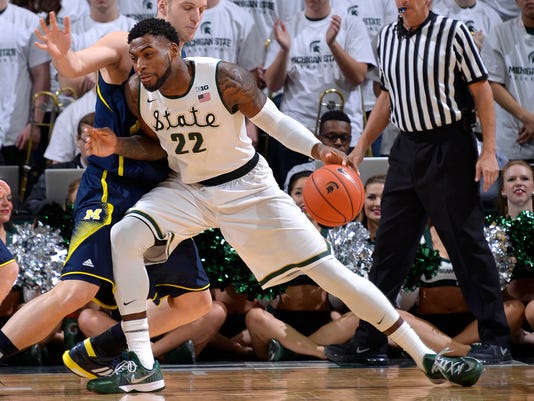 At 6-foot-5-1/2 in shoes, Branden Dawson doesn’t have the height to go along with his muscular build to be a power forward in the NBA; he’ll likely have to shift out of his comfort zone to play small forward if he’s to have a chance to make it professionally.(Photo: Dale G. Young / Detroit News)

Chicago — Branden Dawson entered the media room after a 5-on-5 scrimmage at the NBA draft combine with the mind-set of a veteran. He let another younger, more anxious player try to rush to get to do interviews while he waited patiently, showing some of the savvy gained in his four seasons at Michigan State.

It's an odd juxtaposition. Dawson is working out and scrapping to even be drafted in the second round, while precocious freshmen such as Duke's Justise Winslow, Arizona's Stanley Johnson and Kansas' Kelly Oubre are projected as lottery picks and don't have to play in any scrimmages.

"This experience has been great; it's been a humbling experience," Dawson said. "When they emailed me and said I was chosen, I had a huge smile on my face and I want to take advantage of every situation."

Dawson watched last season as former MSU teammates Adreian Payne and Gary Harris were selected in the first round, after he opted to return for his senior season and to try to improve his draft stock.

But at 6-foot-5-1/2 in shoes, Dawson doesn't have the height to go along with his muscular build to be a power forward in the NBA; he'll likely have to shift out of his comfort zone to play small forward if he's to have a chance to make it professionally.

Dawson relished the opportunity to showcase his talents at the combine, following a seven-point performance in Thursday's scrimmage with 17 points — on 7-of-12 shooting — on Friday.

"A lot of coaches and GMs were concerned about my position (moving from the (power forward) to the (small forward). I've played the (small forward) my freshman and sophomore season and we had to make the adjustment," he said. "I've been working on things like my ballhandling, decision making and shooting. I just want to show people that the (small forward) for me is not something that I've never played.

It's an uphill climb for Dawson, who didn't make a 3-pointer in his entire college career but has shown flashes of a consistent jump shot in college. Doing it at the NBA level will be difficult, to say the least.

What makes the transition seem not so hard is watching what former teammate Draymond Green has done with the Golden State Warriors, including helping them to the Western Conference Finals in the playoffs this year.

Green also had to adjust to playing small forward — and showed NBA teams that there is a hybrid position for players who have the build but may not have the height to be power forwards.

"That's definitely motivating for me. I've watched (Draymond) a lot and he comes back when they're done in the summer and talks to us," Dawson said. "People questioned the position and said he was too small. He's the type of guy who wants to prove everyone wrong and that's what he did.

"Just watching him throughout his career has been great, as he persevered through ups and down and adversity."

Green was an All-America selection but dropped to the second round because of the uncertainty about whether his skill set would translate; Dawson is hoping teams have learned from that and can take a chance on his, as well.

Dawson said he already has met with the Wizards, Clippers and Pelicans and is hoping to add some individual workouts with teams as the process continues ahead of the June 25 draft.

His former teammates have helped make the draft process easier, as well, giving Dawson some tips on how to navigate some of the pitfalls.

"I've been talking to Draymond, Adreian and Gary. Those guys told me to go out and play hard and do the things you're strong at," he said. "With the interviews, they said tell the truth, don't hide anything and be up-front with those guys."

One of the biggest thrills for Dawson, though, was his final season at Michigan State. Although the Spartans had their streak of having every one of their four-year players make it to at least one Final Four ended in 2014, Dawson was able to help get coach Tom Izzo and MSU back as a senior.

More importantly, Dawson was able to add to his athletic achievements with a personal triumph — he was able to finish his degree.

"It was a huge honor for me to go back and get my degree," Dawson said. "That was one thing I promised my mom and with my family being there to watch me walk across the stage, it was a huge honor."

If he's drafted, he'll get to make another big walk across a stage.