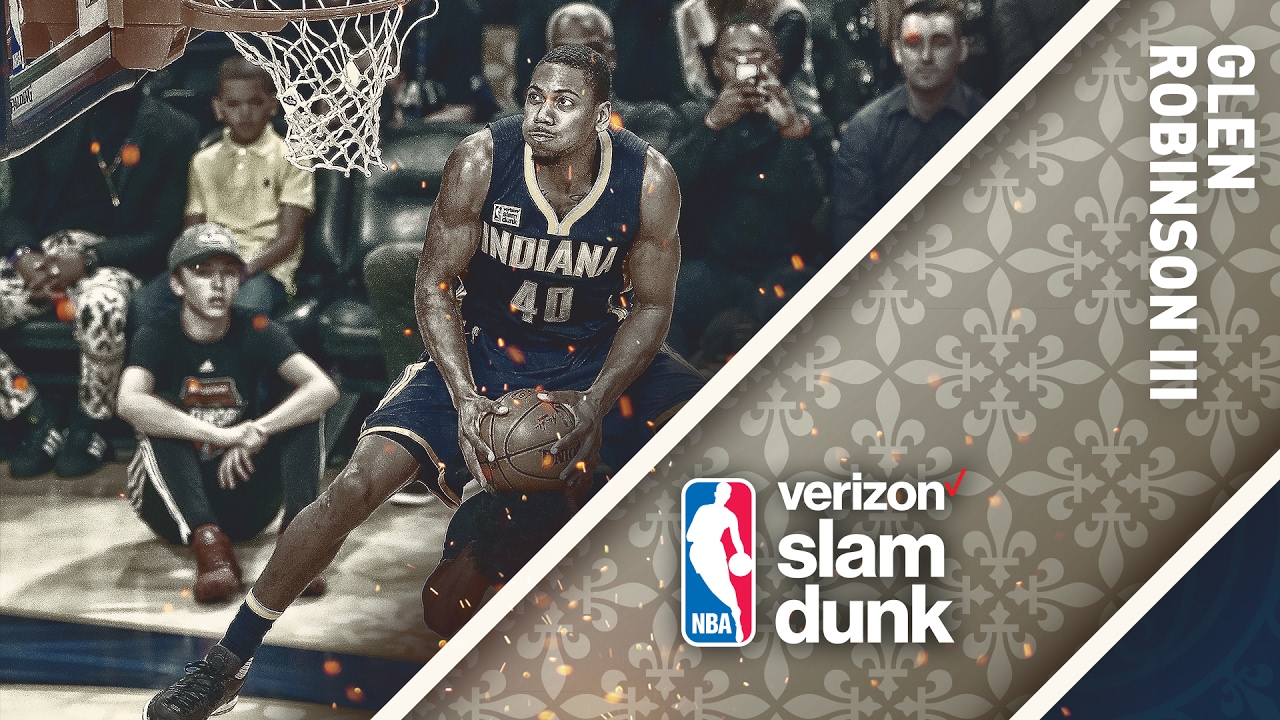 Robinson leaped over all three, snagging the ball from George along the way before finishing with an emphatic, two-hand, reverse jam, giving him a perfect score — and the title — on his final dunk.

“I know I’m a jumper. Like I said, I’m a guy that stays out of the way, but when it’s time to shine, that’s my thing,” Robinson said. “I knew all along I had some things planned and I just wanted to show the world.”

Robinson edged out Phoenix’s Derrick Jones Jr., who was done in by his failure to complete his difficult first dunk of two in the final round.

Jones still managed a perfect score on his second dunk, when he received a bounce-pass in the paint, put it between his legs and threw down a left-handed jam. But Robinson made sure it wasn’t enough.

Both dunk finalists delighted the crowd with soaring slams over teammates and others that showcased the explosive spring in their vertical leaps.

“I thought I would go up against Derrick in the finals,” Robinson said. “I’ve seen the things that he can do. That guy can jump.”

Robinson’s first dunk was one of his best. He leap-frogged one man sitting on another’s shoulders, grabbed the ball from the elevated man’s hands and slammed it home. He said 2000 dunk champ Vince Carter was one of his primary influences, along with Michael Jordan, of course.

“Vince Carter did one of his best dunks first, and it kind of intimidated people. That’s what I wanted to go out and do,” Robinson said. “Who knows if it worked, but they missed some of their dunks and it gave me a little more room.”

Afterward, he couldn’t take his hands off of the trophy — a gold basketball — and made it sound as if that would remain the case through the weekend.

“I know I’m not letting go of her right there,” he said. “She’s following me everywhere I go. It’s Mardi Gras. We’re going to have a good time.”

Jones jumped over four teammates including Devin Booker and Marquese Chriss in the first round. He also drew roars from the crowd when he took a pass off the side of the backboard from Booker with his right hand, put the ball between his legs to his left for a round-house jam.

The dunk that cost him was a bold one. He tried to leap a friend and the Suns’ gorilla mascot, grab the ball on the way over, put it between his legs and then finish with a windmill. But he couldn’t get the dunk to go down in his allotted three attempts.

DeAndre Jordan of the Los Angeles Clippers and Aaron Gordon of Orlando were unable to emerge from the first round. Jordan dunked over DJ turn tables and Gordon dunked after receiving a bounce pass from a drone that had flown over the court with the “Star Wars” theme music playing.

Eric Gordon got his win in New Orleans, where he played the previous five seasons before leaving last summer in free agency.

Gordon’s score of 21 in a final-round tiebreaker defeated Cleveland’s Kyrie Irving, the 2013 winner who had 18. The pair had each finished with a score of 20 in the final round, meaning they each had to shoot 25 more balls to decide it.

“I wasn’t really concentrating on how many I made,” Gordon said. “It’s all about just knocking down the shot. I never counted in my head or anything. I just go out there and just shoot the ball.”

Thompson was stunningly eliminated in the first round, missing a final shot from the corner that could have put him through ahead of Kemba Walker.

Big men reigned supreme for a second straight year in the skills competition, with the 7-foot-3 Porzingis beating Utah’s Gordon Hayward in the final round.

Those vanquished in earlier rounds included guards John Wall of Washington and Isaiah Thomas of Boston, both because they couldn’t make their initial 3-pointers required to close out the course before Hayward did, even though Hayward had trailed each of them dribbling down the court by a considerable margin before hitting his clinching shots.

Porzingis emerged from the big-men’s division that included the Pelicans’ Anthony Davis and Denver’s Nikola Jokic.

“It’s a good feeling that I’m able to showcase my skill with my size and show to the kids that you’re capable of doing that even if you’re tall and lanky like me,” Porzingis said.

Porzingis and Hayward were neck-and-neck until the end of the course, but Porzingis hit his 3 first to end it.