The old mark for an opening quarter was 50 points and accomplished by several teams. 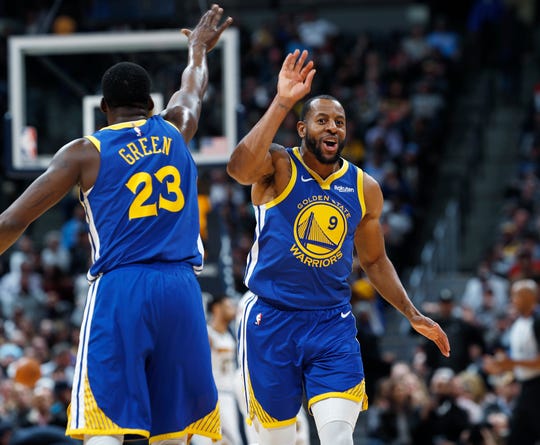 Denver — Kevin Durant and the Golden State Warriors weren't trying to send any sort of message or make any kind of statement against a team they were chasing in the Western Conference.

"They know who we are," Durant said.

Stephen Curry and Klay Thompson each scored 31 points as the Warriors, propelled by an NBA-record, 51-point first quarter, regained the top spot in the West by routing the Denver Nuggets 142-111 on Tuesday night.

"Beautiful, beautiful basketball," Warriors coach Steve Kerr said. "Just liked the way our guys moved the ball, the shot fakes, playing with purpose, playing with a simple style of execution but aggressive at the same time. Finding that balance is always what we're looking for. That was as good as it gets for us.

"I don't remember a better first quarter. That was a fireworks show."

Golden State cruised to a fifth straight win to move a half-game in front of the Nuggets, who had their 12-game home winning streak snapped.

The showdown between the top two teams in the conference proved a little too big for the Nuggets, with Curry and Co. putting on a shooting exhibition all night long. Durant hit the first shot of the night, a 12-footer, as the Warriors broke the old first-quarter mark of 50 held by several teams. The last time it happened was also against Denver when Phoenix scored 50 on Nov. 10, 1990.

"They came in with an edge and we didn't have that edge to start the game," Nuggets coach Michael Malone said. "I don't think anybody on our team is scared of the Golden State Warriors or too respectful. They took it to another level and left us in the dust."

Golden State shot a blistering 60 percent from the field, had 38 assists and hit 21 3-pointers — 10 in the first quarter — in leading wire-to-wire. Durant finished with 27 points and Draymond Green was a plus-41 as he had 13 assists to go with four points.

"When we make shots, we're a tough team to beat," Curry said.

Denver knocked off Golden State 100-98 in Denver on Oct. 21 thanks to Juancho Hernangomez blocking a layup at the buzzer. This version of the matchup was never close.

And this demonstrates just how dominant the Warriors were in the opening half: Denver scored 60, shooting 49 percent from the floor, and still trailed by 19 at the break.

As tempting is it might be to erase this game from memory, Malone won't let his team hit the reset button.

"I don't believe in flushing games when you get your (expletive) kicked," Malone said. "Take this failure of tonight, learn from it and use it moving forward. If you can do that, this negative becomes a positive in the long run."