Another dominant second-half defensive performance helped the Celtics retake control and another late scoring run helped them pull away for a 104-96 victory. 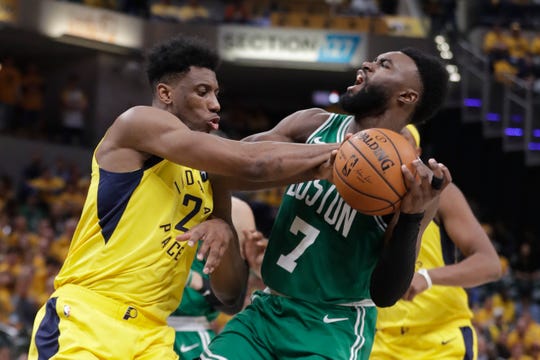 Another dominant second-half defensive performance Friday night helped the Celtics retake control of the game and another late scoring run helped them pull away from Indiana for a 104-96 victory and a 3-0 series lead.

“We’ve come a long way,” All-Star guard Kyrie Irving said. “We’re all making sure we’re giving each other confidence and doing the little things to ensure we win. When you have that type of camaraderie, executing is a lot easier. Now that the stakes are higher, we’re settling into who we want to be.”

While the names and numbers seem to change on a daily basis, the results have remained strikingly consistent.

The Celtics turned Game 1 by limiting Indiana to eight third-quarter points and won by 10. In Game 2, the Celtics erased a double-digit deficit by allowing just 12 fourth-quarter points as they won by eight. This time, it was a 12-point third quarter that swung the momentum, leading Boston to its sixth straight win over Indiana — all since January.

If they can do it one more time Sunday, last year’s Eastern Conference runner-ups will be headed to the conference semifinals.

It seems Boston has an answer for every adjustment the Pacers make.

With the league’s best defense focused on holding Irving in check Friday, Brown went 8 of 9 from the field and grabbed seven rebounds Jayson Tatum added 18 points and seven rebounds and Irving was still productive with 19 points, 10 assists and five rebounds.

For Indiana, it has been a nightmare of a series.

After charging back from a 15-point first-quarter deficit to take a 61-59 halftime lead, Myles Turner opened the third with a 3-pointer to give the Pacers a five-point lead. Tyreke Evans matched his playoff career high with 19 points, 12 in the second quarter.

But then the Celtics did it again.

When Indiana’s offense bogged down in the third, Boston scored eight straight points to retake the lead, closed the quarter on a 9-2 run and delivered the final blow with a 10-4 spurt late in the fourth to make it 98-92.

“In the third quarter, we lost our patience,” Pacers coach Nate McMillan said. “We took quick shots, bailed them out, and lost our rhythm.”

►Toronto 98, (at) Orlando 93: Pascal Siakam had 30 points and 11 rebounds, Kawhi Leonard added 16 points and Toronto held off Orlando to take a 2-1 lead in the Eastern Conference series.

Siakam was 13 for 20 from the floor and the Raptors held Orlando to 36 percent shooting. Leonard had 10 rebounds, Danny Green had 13 points and Kyle Lowry finished with 12 points and 10 assist.

Terrence Ross led Orlando with 24 points, and Nikola Vucevic shook off a slow start to finish with 22 points and 14 rebounds.

Game 4 is Sunday night in Orlando.

Lowry’s 3-pointer with 7:48 left gave Toronto its biggest lead at 86-69. The Magic came flying back, and Ross’ 3-pointer with 41 seconds left got Orlando to 96-93. Leonard was short with a jumper on the next possession — but the Magic couldn’t control the rebound, and were doomed shortly afterward. Leonard made a pair of free throws with 12.9 seconds remaining to make it a two-possession game again.

►(At) Oklahoma City 120, Portland 108: Russell Westbrook had 33 points and 11 assists and the Thunder beat the Trail Blazers to cut their series deficit to 2-1.

Paul George added 22 points, Jerami Grant had 18 and Dennis Schroder 17 for the Thunder. They will host Game 4 on Sunday night.

Damian Lillard scored 32 points, but he had just three in the fourth quarter after scoring 25 in the third. C.J. McCollum had 21 and Enes Kanter added 19.

Lillard cut Oklahoma City’s lead to 86-82 at the end of the third qu. McCollum hit a 3-pointer to tie it at 89 early in the fourth. Oklahoma City regained control, with Westbrook’s jumper with just over two minutes remaining putting the Thunder up 10.