John Beilein, Cleveland Cavaliers get No. 5 pick in NBA draft

John Beilein and the Cleveland Cavaliers ended up with the fifth pick after the New Orleans Pelicans leaped up to take the top selection.t.

John Beilein, Cleveland Cavaliers get No. 5 pick in NBA draft

Former Michigan coach John Beilein talks from the NBA Draft Lottery on his decision to leave the Wolverines for the Cleveland Cavaliers job. The Detroit News

The Cleveland Cavaliers made a splash Monday by pulling John Beilein from Michigan to become their new head coach.

They were looking to make a bigger splash in Tuesday’s NBA draft lottery, with one of the best chances to get the No. 1 overall pick 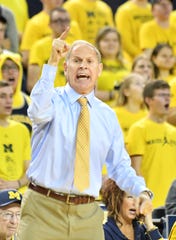 Not so much. They ended up with the fifth pick after the New Orleans Pelicans leaped up to take the top selection.

The Cavs finished 19-63 and were tied with the Suns for the second-worst record in the league but with the draft lottery weighting the odds throughout all the non-playoff teams, things went a little haywire in the lottery.

Entering the lottery, the Cavs had a 52.1 percent chance of getting a top-four pick. Not only did the odds not go in their favor, but the Cavs got their worst possible draft position, falling to No. 5, after the Pelicans, Grizzlies (second) and Lakers (fourth) moved ahead of them.

It's a disappointing outcome for Beilein, who was present in Chicago when the draft positions were revealed, sporting a bow tie, channeling Nick Gilbert, the son of Cavs owner Dan Gilbert, who represented the team on stage as the draft order was revealed on the ESPN telecast.

Nick Gilbert, 22, was trying to make it a trifecta.

Making his fifth appearance as the Cavs' representative at the lottery, Nick Gilbert was hoping to bring more good fortune.

In 2014, then-general manager David Griffin was the Cavs' rep. Now the GM in New Orleans, Griffin represented the Pelicans, who likely will select Zion Williamson with the No. 1 pick, looking to pair him with All-Star forward Anthony Davis, who had announced that he wasn't planning on re-signing with the Pelicans.

Beilein, 66, is looking to help turn things around, taking over a Cavs team that struggled to the second-worst record in the Eastern Conference. The Cavs, along with the Knicks and Suns, each had a 14 percent chance of landing the No. 1 overall pick by winning the lottery.

It wasn't meant to be.

The Cavs had won a tiebreaking coin flip with the Suns and the lowest they could have dropped was fifth, but they typically moved up in the draft, not down. Most notably, in 2003, they had good fortune in landing LeBron James, which changed the trajectory of their franchise.

Tuesday’s lottery results could provide some interesting destinations for the top prospects, with the Grizzlies likely choosing between guards Ja Morant (Murray State) and R.J. Barrett (Duke) and the other going to the Knicks, who got the third pick.

The week continues with more scouting and work for Beilein, with the draft combine in Chicago, leading up to the draft on June 20 and into a busy summer that could see plenty of upheaval on their roster to try to shape it to his vision.

Beilein also will have to fill out his coaching staff, which likely will include several assistants with NBA coaching experience. Early reports have J.B. Bickerstaff and Juwan Howard among those under consideration to join Beilein's staff.

After 12 seasons at Michigan, in which he became their winningest coach with 278 wins, Beilein stunned fans with Monday’s move to the NBA.