The Greek star had 30 points and 12 rebounds to help the NBA-leading Milwaukee Bucks beat the Charlotte Hornets 116-103 for their eighth straight win.

Paris — With the world’s two most expensive soccer players cheering him on in Paris on Friday night, Giannis Antetokounmpo took a while to entertain them.

The Greek star found his rhythm late in the game and had 30 points and 12 rebounds to help the NBA-leading Milwaukee Bucks beat the Charlotte Hornets 116-103 for their eighth straight win. 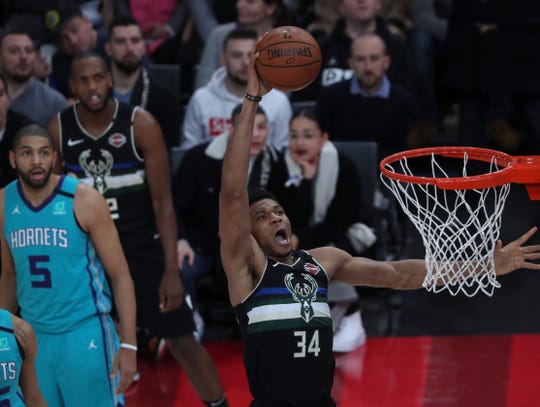 “It’s insane. The crazy part is that we’re really big fans of them and they’re big fans of the team. You never expect them to know who we are and what we do, and be fans of the Bucks,” said Antetokounmpo, the NBA MVP and PSG fan. “But it was amazing they came to the game. They came to the locker room afterwards, we exchanged jerseys, took pictures with them.”

Milwaukee improved to 40-6. The Bucks have the best 46-game start in franchise history. They were 39-7 in 1970-71 when they went on to win the NBA championship.

It was slow-going early on, however, for a sluggish-looking Bucks side which had perhaps done a little too much sight-seeing in recent days, including a visit from Antetokounmpo to PSG’s stadium.

“I only practiced once before the game. It’s kind of hard to get into a rhythm. We weren’t moving the ball as much,” said Antetokounmpo, who had his fourth triple-double of the season on Monday against the Chicago Bulls. “Hopefully, we can learn from the game. Close to the third quarter the bench came back in and did a great job. In the fourth quarter we were able to close out the game.”

“I thought Malik was fantastic, made plays for us. He’s an incredible athlete,” Hornets coach James Borrego said. “The challenge now is to do it on a night-to-night basis.”

The Hornets have lost eight in a row – the longest for the Hornets since dropping 10 straight in the 2014-15 season.

Milwaukee rallied to tie it at 78 going into the fourth quarter. Pat Connaughton put the Bucks in front with a dunk in the fourth. Then Antetokounmpo got going, drawing a foul as he slalomed through the defense.

“Our guys competed hard, put us in a position to win the game against the best team in the NBA,” Borrego said. “The start of the fourth starts with a turnover and that set the tone for the rest of the quarter. It spiraled from there.”

Budenholzer, meanwhile, improved to 100-28 in regular-season games with the Bucks.

There was a reason why this win was such a grind for long periods.

“I thought Charlotte was great tonight,” Budenholzer said. “Their defense was great.”

There was, naturally, a French feel to the night.

Former San Antonio Spurs star Tony Parker was given a huge ovation by the crowd when he was presented to fans before the game. So was Ronny Turiaf, an NBA champion with the Miami Heat in 2012.

Nicolas Batum, who scored five points for the Hornets, raised his hand to the crowd chanting his name at the end.