Caron Butler says the Pistons have the right mental makeup to be a postseason team. 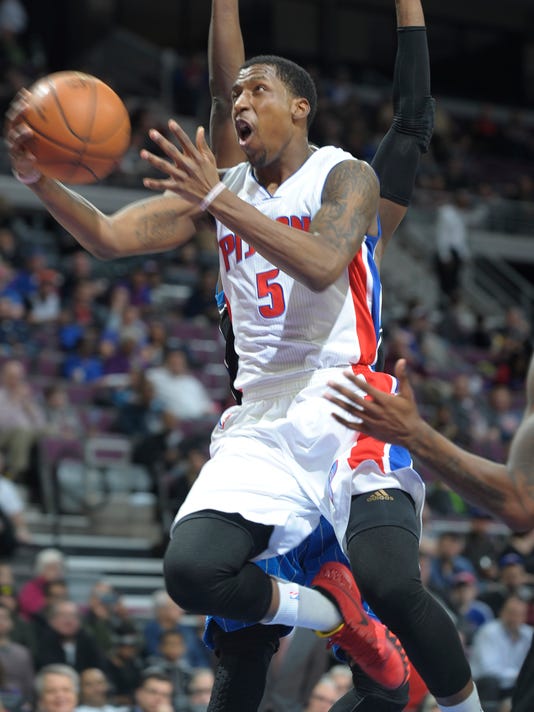 Auburn Hills — It's on the tip of everyone's tongue, although Pistons coach Stan Van Gundy is reluctant to admit it, but the Pistons' growth is becoming difficult to ignore.

When Kentavious Caldwell-Pope steps into a 3-pointer that results in a four-point play, with the Pistons on the verge of an epic collapse, and Andre Drummond rebounds from his deflating 3-for-12 free-throw shooting performance by hitting six of eight the next day, it's proof no matter what happens from here on out, this team should start being treated like a good one.

Caron Butler will tell anyone who's willing to listen this team has the right mental makeup to be a postseason team, and considering the players making plays down the stretch of games are between the ages of 20 and 25, he no longer sounds like a dog whistling.

"Big three," point guard Brandon Jennings said about Caldwell-Pope's triple. "It think it's just our growth. I think if you asked us last year, we probably would've folded and let them take over the game. Everybody's trusting each other, everybody's taking shots, they're confident."

Van Gundy certainly wasn't doing cartwheels over the Magic scoring 70 second-half points as they frenetically attempted a comeback, a different scene from when the Pistons ran away and hid from the 76ers at home Saturday night.

At Toronto and Indiana, they took early haymakers and rebounded to win late in thrilling fashion, same as their win in San Antonio. But playing with leads and understanding the rhythm of games is a new concept for them.

"I think it's a learning experience," Van Gundy said. "We have a lot more experience playing from behind than from ahead. We did a great job once they got the game back (to within 2) but we gathered ourselves very well and played very well down the stretch."

In a way, it's likely easier to mount a serious comeback than to weather one. Momentum is going with you rather than against you, and there's a "nothing to lose" mentality with a comeback rather than the panic that could set in when nothing's going your way.

Clearly it's something the Pistons have struggled with in recent years, with different rosters and coaches. Blowing double-digit leads became custom, almost a hallmark of a bad team unable to close, missing the poise on the floor or on the sideline to slow down and work themselves back to an even keel.

"Absolutely. Each and every one of us," said Drummond when the word "growth" was brought up. "Top to bottom. We're not really getting down on ourselves when we make bad plays. We're working hard each and every day and we're starting to get rewarded with wins."

"Brandon's done a great job these past few games, finding guys in the right position to get them to score. Even tonight it shows he's maturing over time with really learning his teammates and learning where they like the ball."

Van Gundy still believes adversity is around the corner in an 82-game season, that his team is still learning to win, but one thing they've taken ahold of quickly is leaving the games played behind them to look ahead — a difficult thing to do during a 12-3 stretch when such winning is still novel for this group.

"It was definitely a must-win," Jennings said of Wednesday's game.

"With Milwaukee and Toronto, we have to start stringing some wins together."