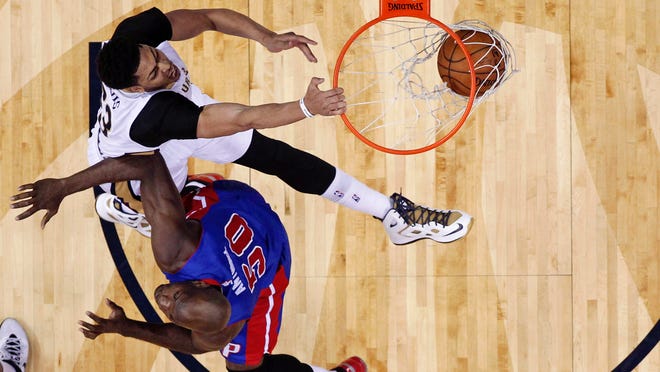 New Orleans — The Pistons prepared for Wednesday's game against the Pelicans with a two-day mini-training camp.

One day was spent mostly on offense, the next on defense.

With all the moves the Pistons made, they needed time to get to know one another. Only eight of the current players went through training camp in October.

Defense, however, was where the Pistons needed to make improvements. And with guards Reggie Jackson and Kentavious Caldwell-Pope athletic and long with good instincts — and inside men Greg Monroe and Andre Drummond — big and mobile — they believe there's no reason they shouldn't get better.

"We should be a pretty good defensive team," coach Stan Van Gundy said. "We still have inconsistent focus and commitment on the defensive end and we probably need to know a little bit better what we are going to do but that comes with experience."

Van Gundy, however, admitted he doesn't know what type of effort to expect from his team from night to night and how long it will last.

"We should be more committed on a consistent basis," Van Gundy said. "We have the makings of a good defensive team. We are long. We got good quickness in the backcourt. We've got a guy in Andre that as he learns more and reacts better he can be a real defensive force. He is not where he needs to be. He knows that but he is working hard at that."

Following a 106-89 home victory over the Wizards on Feb. 22, the Pistons began to spring defensive leaks. They've given up an average of 107.3 points since.

"There are too many times when we are not locked in and focused," Van Gundy said. "Applying our rules and applying our game plan is what we need to do. It is something we are working on."

The Pelicans welcomed back Anthony Davis (shoulder) to the lineup.

"He changes their team a lot," Van Gundy said. "It's a team that has been playing well without him. To get him back is a big boost to them trying to make the playoffs."

The Pelicans kept on rolling without Davis, winning five of their last six games before a loss to the Mavericks.