Thursday's NBA draft is a tough one to predict.

1. Minnesota: Karl-Anthony Towns, 7-0, C, Kentucky -- Jahlil Okafor is the best offensive player in the draft, but Towns might be the best fit here because he is more versatile and can score off the wing and on 3-pointers. He also can play defense. Streeter Lecka, Getty Images
Fullscreen 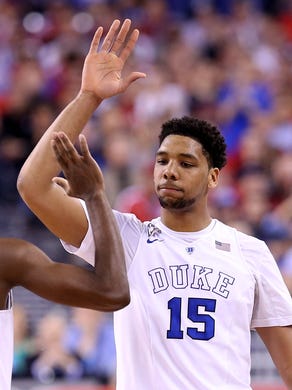 2. L.A. Lakers: Jahlil Okafor, 6-11, C, Duke -- Towns won’t work for the Lakers, so it’s assumed Okafor drops here, which is a great get as he provides inside punch and muscle, and will get out of Kobe Bryant's way. Streeter Lecka, Getty Images
Fullscreen

3. Philadelphia: Kristaps Porzingis, 7-1, F, Latvia -- The 76ers will set the tone for the draft. Point guard is a need, but they will pass on D’Angelo Russell, who refused to work out for them, and take the big shooting forward. Twitter
Fullscreen

4. New York: D’Angelo Russell, 6-4, G, Ohio State -- The Knicks are likely to sign Greg Monroe or Danny Green to pair with Carmelo Anthony. A point guard like Russell can bring it all together. Jonathan Ferrey, Getty Images
Fullscreen

5. Orlando: Justise Winslow, 6-6, F, Duke -- The Pistons need him, but the Magic won’t pass on Winslow because they needs shooting from the wings, and Winslow provides that and superior defense. He’s a high character guy, too. Ronald Martinez, Getty Images
Fullscreen

7. Denver: Mario Hezonja, 6-8, G, Croatia -- Ty Lawson could be dealt as the Nuggets seek stability. If, as reported, Hezonja likes to scream at teammates, he will get plenty of chances in Denver. Getty Images
Fullscreen

8. Detroit: Stanley Johnson, 6-6, F, Arizona -- He’s a versatile player who can play two through four, and is improving as a shot-maker. He must, however, improve his shooting -- that’s why the Pistons might be looking to make a deal. Ethan Miller, Getty Images
Fullscreen

9. Charlotte: Devin Booker, 6-6, G, Kentucky -- The Hornets were among the worst-shooting teams in the NBA, and need someone to stretch the floor. Booker is the best shooter in the draft. Andy Lyons, Getty Images
Fullscreen

10. Miami: Willie Cauley-Stein, 7-0, C, Kentucky -- He provides defense, rebounding and athleticism -- all areas the Heat lack. He can be an insurance policy for Chris Bosh. Andy Lyons, Getty Images
Fullscreen

11. Indiana: Cameron Payne, 6-2, G, Murray State -- He broke his finger, but it won’t stop the Pacers from nabbing him. He can find the open man and hit 3-pointers. David Crenshaw, AP
Fullscreen

12. Utah: Myles Turner, 6-11, F, Texas -- The Jazz could use outside shooting to complement Derrick Favors and Rudy Gobert. The Celtics are willing to trade up to get him. Getty Images
Fullscreen

13. Phoenix: Bobby Portis, 6-10, F, Arkansas -- He has a bit of a mean streak, just what this team needs. Don’t be surprised if the Suns trade out of the first round (they have seven players 25 and younger). Kevin C. Cox, Getty Images
Fullscreen

15. Atlanta: Trey Lyles, 6-10, F, Kentucky -- He lacks explosiveness, but will develop into a stretch four. Lyles was buried a bit at Kentucky, so he’s a bit of an unknown. Streeter Lecka, Getty Images
Fullscreen

16. Boston: Montrezl Harrell, 6-8, F, Louisville -- He’s strong and active around the basket, although he is a bit undersized. The Celtics are looking to move up. Maddie Meyer, Getty Images
Fullscreen

17. Milwaukee: Frank Kaminsky, 6-11, F, Wisconsin -- Kaminsky must work on his perimeter defense, and is effective inside or out. Streeter Lecka, Getty Images
Fullscreen

21. Dallas: Tyus Jones, 6-1, G, Duke -- Jones has just average quickness for the point guard position but makes up for it with poise and court awareness. Andy Lyons, Getty Images
Fullscreen

22. Chicago: Chris McCullough, 6-9, F, Syracuse -- A knee injury prevents him from going higher. This, however, is a good gamble for the Bulls. Brett Carlsen, Getty Images
Fullscreen

24. Cleveland: Terry Rozier, 6-2, G, Louisville -- He can score, but his shot selection is shaky. He needs a little discipline, but can set up teammates. Maddie Meyer, Getty Images
Fullscreen

25. Memphis: Rashad Vaughn, 6-5, G, UNLV -- The Grizzlies can wait for him to develop his offense. Ethan Miller, Getty Images
Fullscreen

26. San Antonio: Guillermo Hernangomez, 6-11, PF/C, Spain -- He lacks a high basketball IQ, but he is strong and physical. The Spurs will turn him into something after Tim Duncan leaves. Roberto Serra, Getty Images
Fullscreen

27. L.A. Lakers: Delon Wright, 6-5, G, Utah -- He loves to control the ball, but his main role is to use his size to see over the defense and find Kobe Bryant on the wing. Ronald Martinez, Getty Images
Fullscreen

28. Boston: Christian Wood, 6-11, F, UNLV -- The Celtics must bulk this skinny guy up. He can't hold the post, though he has good post moves. Ethan Miller, Getty Images
Fullscreen

30. Golden State: Cedi Osman, 6-7, F, Macedonia -- He’s pretty athletic and the kind of a busybody the Warriors could use. Getty Images
Fullscreen

Thursday's NBA draft is a tough one to predict because many teams are looking for an athletic small forward or a power forward with some shooting range.

There are, however, some wild cards.

The 76ers appear to be sold on Kristaps Porzingis — although D'Angelo Russell also is a possibility — but the Sixers could be willing trade partners.

And the Knicks could shake things up, too, looking for someone to make an impact — on the court, with fans and with the New York media.

As for the Pistons, they are more likely to stand pat at No. 8 rather than make a move up or down. If they stick at eight, a good bet is Arizona forward Stanley Johnson. But if they do trade up, Duke's Justise Winslow could be the right player.

Go through the gallery above or go here for The Detroit News' NBA mock draft by Terry Foster.