Pistons could make a move on draft night

Pistons could make a move on draft night 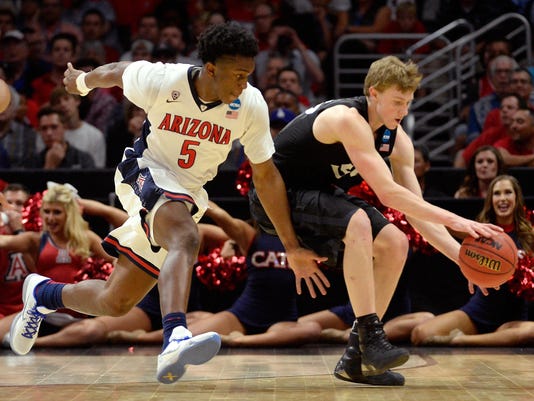 Some in the media have the Pistons taking Stanley Johnson of Arizona with the No. 8 pick in the first round.(Photo: Harry How/Getty Images)

The problem is, Jennings is coming off an Achilles injury, something that might hinder his speed. But if teams are convinced he has made a full recovery, the Pistons could move up to take Duke small forward Justise Winslow or Croatian shooting guard Mario Hezonja.

The Knicks, who own the fourth pick, and Magic, at No. 5, are taking offers to trade down — and could be willing partners.

In addition to the eighth pick, the Pistons will be looking for a backup center with the 38th selection (second round).

Leading candidates at No. 8

Pros: He's young, aggressive and athletic. One of the better defenders at small forward.

Cons: He's an inconsistent shooter and struggles to finish against taller players.

Pros: He's the youngest person in the draft (19), but the best shooter.

Pros: He's long and lean, and a freaky athlete. He can shoot 3-pointers.

Cons: He's a streaky shooter and can get on a coach's nerves.

Pros: He can shoot from deep and does a lot of things well. A jack of all trades.

Cons: He was buried a bit at Kentucky and doesn't do one thing exceptionally well.

Pros: He can do a lot of things, but excels at shooting and defense.

Cons: Winslow might be out of reach, but is worth giving up Brandon Jennings to move up.

Pros: He's a solid shooter and has a swagger that is intriguing.

Pros: He's intriguing. If the Pistons trade down, they can snag a guy who is dangerous inside and out.

Cons: Why add another below average defender?

Pros: He can shoot from deep and run the floor.

Cons: The Pistons must trade up and give up too many assets.

Who other media outlets are projecting for the Pistons: