Jackson responds to scolding, leads Pistons to win over Cavs

Jackson responds to scolding, leads Pistons to win over Cavs

Detroit Pistons' Andre Drummond drives around the Cavaliers' Timofey Mozgov in the second quarter of their game at The Palace of Auburn Hills, Tuesday, Nov. 17, 2015. The Pistons won 104-99. Drummond had 25 points and 18 rebounds. Clarence Tabb Jr., Detroit News
Fullscreen 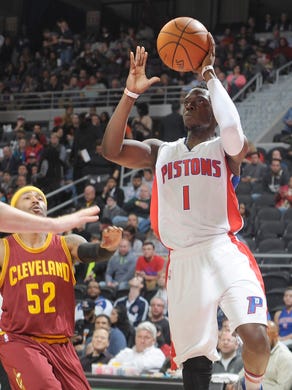 Lions Golden Tate prepare to throw a football in the crowd during the third quarter. Clarence Tabb Jr.,Detroit News
Fullscreen

Lions Matthew Stafford prepares to throws a ball to the fans in the third quarter. Clarence Tabb Jr.,Detroit News
Fullscreen

Auburn Hills — Reggie Jackson uttered the critical words as he broke up a morning video session with his coach Stan Van Gundy.

Those words carried him to what Van Gundy called his best game as a Piston. And they were the words that carried the Pistons to a 104-99 victory Tuesday night over the Cleveland Cavaliers, snapping a four-game losing streak and turning The Palace into the House of Pain for the visitors.

The Pistons withstood a 30-point night by LeBron James because Jackson was decisive, aggressive, smart and was locked down at the free throw line. And by the way so was Andre Drummond (25 points and 18 rebounds), who made three of four free throws down the stretch as the Hack a Drum strategy failed.

Jackson made six consecutive free throws to hold off the Cavs who stumbled down the stretch.

During a week in which Ronda Rousey got knocked out and the Lions finally won in Green Bay, the Pistons added a bit of their own magic by watching their leader be aggressive and decisive.

Maybe the reach of Lions owner Martha Firestone Ford extends to The Palace where several Lions players, including Matthew Stafford and Golden Tate enjoyed the game and threw autographed footballs into the crowd.

Jackson finished with 23 points, 12 assists and six rebounds after his coach scolded him earlier in the day, saying he needed to play better. Jackson still had moments where he pounded the ball too much and did not turn the corner aggressively enough on pick-and-roll plays. But once he started rolling downhill it was difficult to stop him.

"I am happy that is the way he feels," Jackson said. "I was trying to be aggressive and decisive with my decisions. I just knew I had to play aggressive and play my game and really be on the attack."

Drummond added: "He did a really good job of attacking the defense and making them decide whether to guard him or to guard me. He made it real tough on them tonight."

The Pistons needed every bit of effort from Jackson. The Cavs opened the second half with a 14-2 run to take a 70-57 lead with 8:55 remaining in the third quarter. They led by as many as 10 in the fourth quarter and were up 89-81 with 6:59 after a James jumper.

Jackson countered with an alley-oop dunk to Drummond, Marcus Morris hit an 18-foot jumper and Ersan Ilyasova (season-high 20 points) hit a three-point shot to slice the lead to 89-88.

The Cavs went back up five but Drummond slammed a dunk and a free throw to cut the lead to 95-93. Then something strange happened. The Cavs deliberately fouled Drummond and he made free throws.

"For me, I shoot hundreds of free throws every day," Drummond said. "There comes a point where I have to shoot with confidence. Tonight, I knew we had the game on the line, so I went back to basics."

There were so many key moments in a frenzied game. Drummond hit a free throw with 2:07 remaining to give the Pistons the lead for good.

"We thought perhaps we could gain a possession or two and, unfortunately, he made them," Cavs coach David Blatt said. "To be fair I said what I said last year, I did say we would use it if we felt it was necessary because those were the rules."

Three times in the ensuring moments James was matched up with Jackson on a switch. His job was to prevent James from turning a corner and either force him to pass or shoot a jumper. Jackson stood his ground although Van Gundy admitted Lady Luck played a role.

"Our guys did a pretty good job of staying in front of him," Van Gundy said. "He missed shots he was making in the first half. If he gets those same exact shots and go out and play again, he can make all three of them.

"I was pleased with our guys. They stayed in front of him. Could he have made all three of those shots? He absolutely could."

But James didn't. He cooled down after torching the Pistons for 23 first-half points. He also was held to three assists.

"I didn't hold him to three assists," said Morris, who did the heavy work on guarding James. "He just didn't pass."

It was of small consolation that James passed Jerry West (25,192 points) for 19th on the all-time scoring list. James now has 25,213 points.

The Pistons passed a big test and ended a bad stretch that caused doubts and debates.