Pistons guard Brandon Jennings could be taking another big step toward a return. 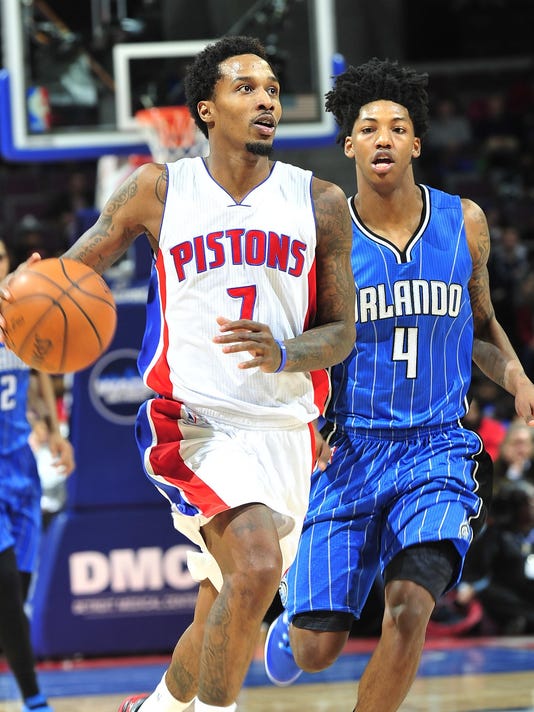 Pistons guard Brandon Jennings, shelved since January because of a torn Achilles, could be taking another big step toward a return. He might play Saturday for the Pistons’ NBDL affiliate in Grand Rapids.(Photo: Clarence Tabb Jr., Detroit News)

Auburn Hills — Pistons guard Brandon Jennings, shelved since January because of a torn Achilles, could be taking another big step toward a return.

Jennings has been ramping up his practice regimen gradually in the last few weeks and could be getting back to game action this weekend — in the NBDL. The Pistons' D-League affiliate, the Grand Rapids Drive, faces the Iowa Energy at 7 p.m. Saturday at the Deltaplex Arena and Jennings is looking to make his debut there this season.

"I'm having a lot of fun because I know (the return) is close and I can't wait to get back out there," Jennings said following Wednesday's shoot-around at the Pistons practice facility. "It's about an 80 percent chance that I will be playing in the D-League Saturday. I just want to play. I want to get out there to see where (the Achilles) is at."

Jennings, a 6-foot-1 guard, could be the elixir the Pistons need off the bench to cure their scoring ills. He averaged 15.4 points last season before the injury and has said he's willing to take on a different role as a bench scoring option, as Reggie Jackson has assumed the starting role since Jennings' injury.

It's been a long road back for Jennings, who has been playing in some 4-on-4 and 1-on-1 games against the Pistons reserves in practice and has had the go-ahead to play at full speed for a couple weeks. Although one of his greatest assets is his speed and quickness, he's still working to get back to 100 percent in those areas.

Coach Stan Van Gundy has reiterated throughout the rehabilitation process that there's no rush to get Jennings back into the lineup; rather, they want to make sure he's healthy and doesn't have to be out for a longer period because he's trying to return to the court too soon.

Even more, they aren't looking to have him come back and struggle because he hasn't gotten all of his wind and conditioning to where it needs to be. Jennings isn't there yet, but needs to get game action to work out the rest of the kinks.

"He's got to get up closer to his normal quickness. He's getting better but still has a ways to go, though," Van Gundy said.

"He's got a little bit to go — not a long ways to go. He really needs to get more up-and-down playing and it's been really hard."

Part of the difficulty in helping Jennings get the full-speed, 5-on-5 reps he needs is the condensed schedule the Pistons have had in recent weeks. With games and shoot-arounds, there hasn't been much time for practice, which has prevented the rest of the players from having extensive court time with him.

"We've played so many games in so few days that yesterday we got him 15 minutes of up-and-down but because of the other guys, we can't get him an hour," Van Gundy said. "He really needs to get more full-court stuff than we've been able to get him so far."

Throughout the process, Jennings has targeted a return date around Christmas. Playing in game situations, even at the D-League level, could prove advantageous for Jennings, as he'd get true game speed and get the up-and-down effect of playing defense for an extended period.

Beyond the physical issues in dealing with an Achilles injury, Jennings has handled the mental roadblocks as well, hurdling over them and looking to get back to his level before the injury, where he was playing some of the best basketball of his career.

"Once I start playing, I don't really think about (the injury); the only time I think about it is when I'm not playing," he said. "If I'm just going through a workout, I'll think about it more, but when I'm out there hooping, I just play.

"I'm 26 and everybody says it's a career-ending injury; I definitely don't believe that. I'm just excited to get back."

Van Gundy was unclear on whether Jennings would be playing with restrictions when he returns, such as not playing in back-to-back games or playing extended minutes in a game.

If Jennings does play with the Drive — a final decision hasn't been made yet — it will give a good indication of how much he can handle. Jennings has been medically cleared to do all basketball activities, so it's just a case of how he reacts to playing for longer stretches.

"That's something I don't know. He's been able to practice on consecutive days — (back-to-back games) would be a medical decision," Van Gundy said. "Right now, we haven't talked about that at all.

Unless there's some unforeseen change of heart, Jennings looks like he'll start on Saturday, but he'll be counting down the time until that comes. He's just looking to test things out in a game scenario and take it from there.

"It's something I'll think about and I think the game is Saturday so I still have time to think about it," Jennings said. "It definitely wouldn't be a bad idea, knowing I haven't played in like 12 months."