Pistons offense is perking up at home

The Pistons boasted offensive outbursts of 118 points against the Pacers and 119 against the Celtics.

Pistons offense is perking up at home 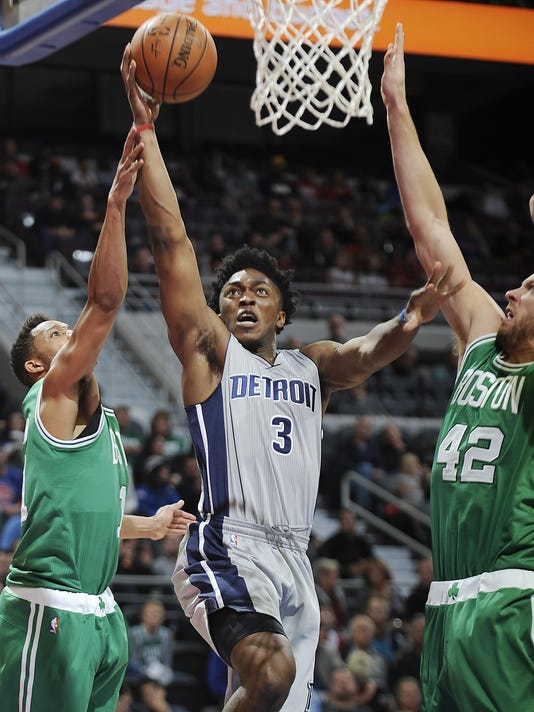 Auburn Hills — Unlike their last home stand, the Pistons didn’t get a sweep.

But they might have found something more valuable: their offense.

The Pistons won two of three at The Palace this week and boasted offensive outbursts of 118 points against the Pacers and 119 against the Celtics.

Those account for two of their highest-scoring games in regulation this season, a welcome arrival for coach Stan Van Gundy.

“I do think we have moved the ball a bit better and our tempo has picked up a little bit,” Van Gundy said. “You need to play very well at both ends of the floor. Our offense needed to improve but our defense can’t take a step back; otherwise, you’re not gaining anything.”

Kentavious Caldwell-Pope had a career-best 31 points Wednesday as the team’s shooting percentage rose to 49 percent.

Part of that improvement is because of the comfort level of playing together. Van Gundy said of the current nine-man rotation, only Andre Drummond, Reggie Jackson, Caldwell-Pope and Anthony Tolliver were on the roster last season.

“There’s no question, getting more time together really helps them,” Van Gundy said. “Guys, as they get more comfortable, get back to being themselves.”

Van Gundy said the next step is to continue to build on the success they’ve had and tinker with the offense some to install more plays to help get players in positions where they can be more effective.

“KCP has progressed to where we can do more stuff for him,” Van Gundy said. “We know what Marcus can do; we’ve got to find — and he’s got to find — better ways to get the ball in his spot. Ersan (Ilyasova) has fit very well; he’s been able to find his shots without us doing a whole lot for him.”

With six years’ experience, Jennings had the right to veto the assignment, but he sees it as an avenue for him to return to the Pistons.

“I don’t think there’s a lot of guys with Brandon’s status in the league — even coming off an injury — who would do that,” Van Gundy said. “Brandon just loves to play basketball.

Outlook: After a three-game skid, the Bulls have won three in a row — all at home. ... The Pistons won the first meeting, 98-98, in overtime.