While Jennings is on track to make a return to the Pistons lineup in a week or two, there’s no immediate timetable. 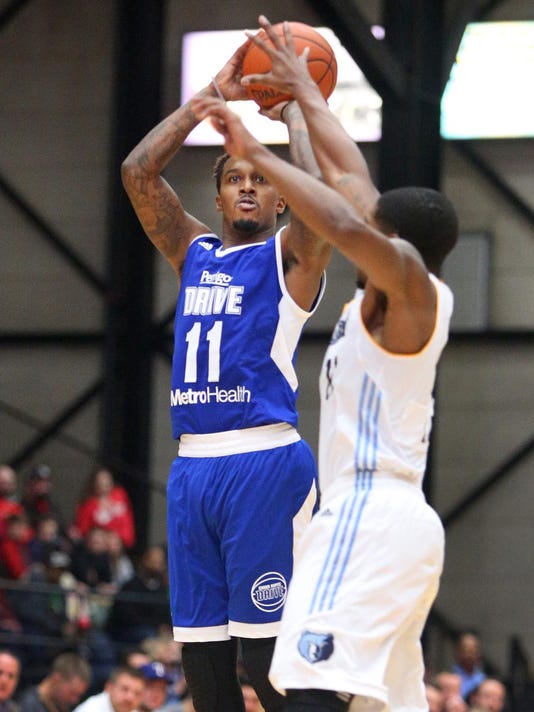 Auburn Hills — Not too long after the big moment finally came, Pistons guard Brandon Jennings almost got caught up in it.

In his first game since tearing his left Achilles tendon, Jennings grabbed a rebound and dribbled up court to try to set the offense. But the ball went off his foot and out of bounds.

Jennings had more good moments than bad, though, in his first outing with the D-League Grand Rapids Drive on Saturday night for a sellout crowd of 6,240 at the DeltaPlex Arena.

Never mind his 11 points and 12 assists — along with five turnovers — in 27 minutes. From the opening tip, Jennings looked as if he was on a personal playground, just happy to be back playing in a game for the first time since sustaining the injury in January.

“I finally got all the nerves out; I was nervous,” Jennings said after Sunday’s practice at the Pistons practice facility. “It felt like my first game ever playing.”

After the first turnover, Jennings seemed like a newbie, but he got back to his old self quickly, tossing the ball off the glass on a fast break for an alley-oop and hitting a pair of 3-pointers, while showing no ill effects of the Achilles injury.

Jennings made it through practice on Sunday with only minor soreness and no other issues. While he’s on track to make a return to the Pistons lineup in a week or two, there’s no immediate timetable.

Although Jennings had hoped that his single performance with the Drive was good enough to catapult him back into the Pistons’ rotation for games at Miami and Atlanta, the moment just isn’t right. Coach Stan Van Gundy, who made the trip to Grand Rapids to watch Jennings, saw some things Jennings needs to work on.

“We’re still going to take our time with it. More on the defensive end, I’m still having trouble with, pushing off, trying to get through screens, which is expected,” he said. “My lateral movement is something I still have to work on.

“I’m going to still make the trip and see what happens.”

The fact that he even played with the Drive shows Jennings’ commitment to coming back. With six years of NBA experience, he could have vetoed the option to play in the D-League. Instead, he used it as an opportunity to get some game action, more than the Pistons could offer him because of their condensed playing schedule.

“I think this helped me out a whole lot,” Jennings said. “I didn’t want my first game back to be in the NBA and I’m happy I was able to get some run. Twenty-seven minutes — I can’t complain.”

Jennings suffered the injury when he making a surge in his production — he was averaging 20.9 points and 7.2 assists and hitting 39 percent on 3-pointers in 13 games in January. That vanquished his season and turned the Pistons’ season — and long-term future in a different direction.

Less than a month later, the Pistons traded for Reggie Jackson and signed him to a long-term contract in the offseason. That left Jennings as something of a lame duck, with his contract expiring after this season, and speculation began that he was on the trading block.

With Jennings’ scoring ability and potential to get back to the levels he achieved last season, he could be more of an asset for the Pistons as the primary scorer off the bench, which could boost their playoff aspirations.

Van Gundy said Friday that he’s in no hurry to make a trade, unless it’s “pretty clear step-up in terms of talent.” With Jennings’ potential and the pending return of Jodie Meeks around February, that might be all the help the Pistons could need.

Pistons general manager Jeff Bower told SiriusXM’s NBA Radio that they aren’t anxious to make a move, just for the sake of change, which could hint at the desire to stand pat, at least for now. 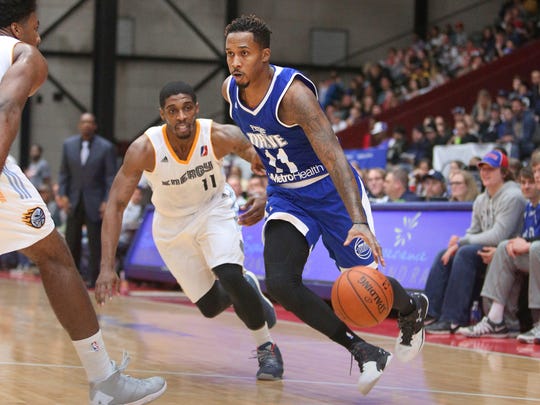 “We’re at a point where we like how we’re playing, we feel we can compete with the teams in the Eastern Conference,” Bower said. “(Jennings and Meeks) really haven’t played for us yet this year. When they do return, they probably can add more to our group than any player that we would make a trade for.”

By getting backup point guard Steve Blake in the offseason, Van Gundy got a steady insurance policy just in case Jennings couldn’t come back healthy or was traded.

Now, with the spectre of having four point guards on the roster, Jennings is looking to move up the depth chart and play with the second unit, ahead of Blake.

“It’ll probably come down to deciding between him and Steve,” Van Gundy said. “I need to talk to (Jennings) but I don’t think at this point that I would play him ahead of Steve.”

That’s the short-term outlook, but eventually, it would seem that Jennings would be able to work his way into the 10-man rotation.

On Saturday night, Jennings showed the flair that was his calling card in his first four seasons with the Milwaukee Bucks, when he averaged 17 points and 5.7 assists and was a find for the Pistons.

He showed the same against the Iowa Energy, with Pistons teammates Andre Drummond and Jackson making the trip to Grand Rapids to support him.

With some flashy passes and alley-oops, Jennings showed that the court vision and swagger were still intact; the quickness and speed on both ends of the court are the only things that he’s waiting to improve.

“He’s looking good; he’s still trying to get acclimated and get back,” Jackson said. “You see the burst and the flashes and we all know the player he can be and can be plays that are explosive. He’s someone we’re going to need when he gets back.”

Jackson was encouraged by Jennings’ return, as was Golden State Warriors guard Stephen Curry, who sent a tweet to Jennings: “Great to see you back on the court!”

It’s just one step for Jennings, but the big moment is still to come.