Detroit has lost three of four and surrendered at least 30 points in five of its last 10 quarters. 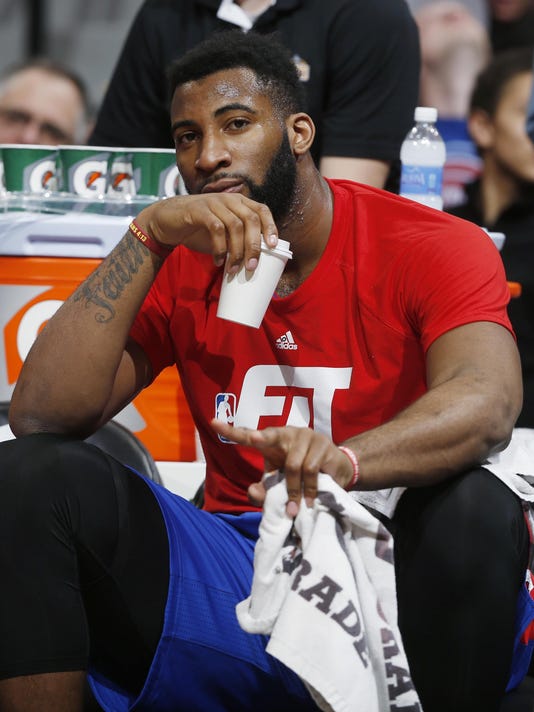 Andre Drummond played just 18 minutes in Saturday’s loss to the Nuggets. He’ll learn Thursday if he will be an All-Star Game reserve.(Photo: David Zalubowski / Associated Press)

Salt Lake City — Having lost three of the last four, the Pistons have been plagued by bouts of poor defensive play and an overall stagnation in their effort.

Even through the calls for leadership and more consistent play, the Pistons still are in position to make the playoffs. Four of the next six games are on the road, so the next stretch of games could be critical in determining their trajectory heading into the All-Star break.

News: The Pistons defense has allowed 30-plus points in five of the last 10 quarters.

Views: Van Gundy has called the defensive effort “deplorable” — and he’s right. Players have said the communication is lacking and that they haven’t been as connected as they were early in the season in getting on the same page defensively.

Van Gundy has said it’s a function of effort and want-to and Reggie Jackson agreed.

“Even when we have want-to, we have to communicate,” Jackson said. “That’s what’s dropped off; we have to talk to each other on the defensive end and figure things out and we’ll be all right.”

Jackson’s defense has been sub-par, but he hasn’t received much help either when his man has gotten past him on drives. In many games this season, whomever Jackson is guarding seems to have an advantage.

Van Gundy lamented that Kentavious Caldwell-Pope, the team’s best on-ball defender, can’t guard everybody earlier this season, which seemed to be a veiled shot at the overall lack of effort. When asked Saturday about the defense of Jackson and Andre Drummond specifically, Van Gundy deferred, saying, “You can go ask them about it.”

More than anything, defense is about effort and if the individual players aren’t playing good defense, it’s going to show — and it’s showing right now in the Pistons’ porous efforts.

Van Gundy did take some of the heat, revealing that some of Sunday’s practice was spent on specific defensive nuances.

“We’re spending all our time on defense, which is not ideal,” he said.

Views: It’s a little bit of a surprise but not a true snub. He still leads the league in rebounding (15.4), including nine games of 20-plus boards. If he’s not selected when the reserves are announced Thursday, then Pistons fans can grab their pitchforks and torches.

Certainly, Drummond has his pock marks — among them: poor free-throw shooting, lacking rim protection and lapses in consistent play — but keep in mind that he is only 22 and still developing, on and off the court.

Drummond is probably known around the league as much for his poor free throws as he is for his superior rebounding, which is a shame. When he’s plugged in, Drummond is one of the best centers in the league; when he’s not, he’s just average.

In Saturday’s loss at Denver, Drummond played a season-low 18 minutes, with a season-low four points and eight rebounds. He’s been up and down this season — mostly up — but he has to erase some of the malaise if the Pistons are going to continue to contend for a playoff spot.

News: The Cleveland Cavaliers fired coach David Blatt after a 30-11 start this season.

Views: The drumbeat for Blatt’s job had been brewing even since he was hired and finally reached a crescendo after losses to the Golden State Warriors and San Antonio Spurs. It was almost a no-win situation (even with a .675 win percentage) for him, because it was (almost) a championship-or-bust proposition.

Even making it to the Finals last season — despite injuries to Kevin Love and Kyrie Irving — there were still doubts about Blatt’s effectiveness.

Put a lot of the blame on the Cavs for how everything was handled. Now, Tyronn Lue takes the reins and should have the same expectations as Blatt.

Outlook: The Pistons have lost three of four and are playing some of their worst defense of the season. They dominated the first meeting against the Jazz, scoring the first seven points in a 98-94 overtime win.