Van Gundy has said in recent weeks that he wasn’t willing to give up assets for a player with an expiring contract. 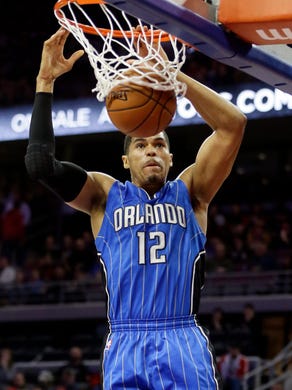 Orlando Magic forward Tobias Harris dunks during the second half of a game against the Detroit Pistons on Jan. 4. Carlos Osorio, AP
Fullscreen

Tobias Harris of the Orlando Magic takes a shot over Amir Johnson of the Boston Celtics on Jan. 29, 2016. Maddie Meyer, Getty Images
Fullscreen 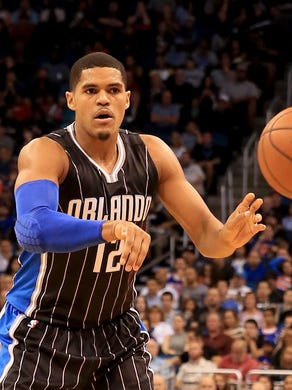 Tobias Harris is not expected to start for the Pistons against the Wizards Friday. Sam Greenwood, Getty Images
Fullscreen 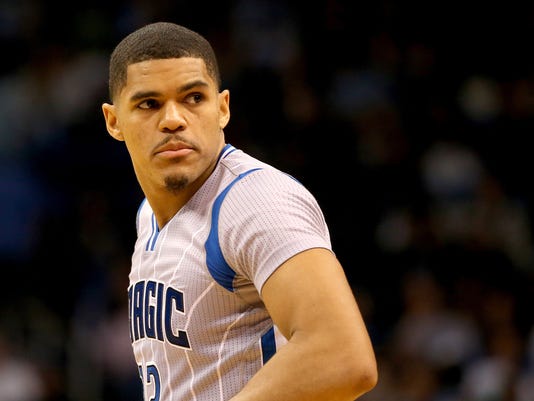 The Pistons weren’t going to be content standing pat.

With their struggles heading into the All-Star break — losing four of their last five and getting worse defensively — the Pistons made a move that could solidify their young nucleus.

Pistons president and coach Stan Van Gundy made a bold move to position the team to be a playoff contender, acquiring forward Tobias Harris from the Magic for reserve point guard Brandon Jennings and starting forward Ersan Ilyasova.

“We’re happy to add Tobias Harris to our team,” general manager Jeff Bower said. “We think he’s going to bring a different element to us and to the floor that’ll prove very valuable down the stretch run.

“We’re also extremely grateful for all the effort and energy invested by both Brandon and Ersan in their time with us. It was not easy for either one of them to be included in this.”

At 6-foot-9 and 235 pounds — and 23 years old — Harris will make the Pistons starting lineup younger and more athletic. He adds frontcourt versatility and defense, and can play both forward positions. In 49 games with the Magic, he averaged 13.7 points, 7.0 rebounds and 2.0 assists in 32.9 minutes.

Harris’ scoring is down about four points and his 3-point shooting has dropped five points (36 percent last season), but his 2-point shooting is at a career-best 52 percent.

He will join the Pistons young core of Marcus Morris (26) and Andre Drummond (22) in the frontcourt, along with Reggie Jackson (25) and Kentavious Caldwell-Pope (22) in the backcourt, and sixth man Stanley Johnson (19).

“We do feel that we had a chance to add a player at 23 years old, that fits the age curve of our core group of guys that we’re building with and possesses a versatility to his game as either a power forward or small forward,” Bower said. “And that flexibility is something that will be something very beneficial in today’s game.”

Detroit, give a warm welcome from the cold D to @tobias31. Welcome to the squad bro #Pistons#Detroitveverybody

Wish @thinkiminthe90s and Ersan Ilyasova the best in Orlando. Teammates only a short time but y'all was real #funtimes#toomanylaughs

The deal makes sense for the Pistons, as it provides another perimeter scorer to build around Drummond, as well as an upgrade on defense. Harris brings a mix of outside shooting and post-up potential.

Harris is signed through 2018-19 at an average of $16 million per season. Jennings was set to become an unrestricted free agent after this season, and Ilyasova had a team option for $8.4 million for next season.

Bower said the Pistons had ongoing discussions with the Magic about other potential deals for about a week, but the Harris deal started to intensify the past few days. In Harris, the Pistons saw a young player in his fifth season who played just a year in college at Tennessee, who had plenty of upside.

“We feel that that showed us a player with a variety of skills that can help the team in numerous ways,” Bower said. “His play and the projection of his performance over the next five years is on a steady incline, based on what we’re seeing and we think that he has a lot of room to grow as a player.”

None of the players involved in the trade will be allowed to practice or play until they all have passed physicals and are cleared by the league. The Pistons, who have 28 games remaining, resume action Friday on the road against the Wizards.

“God closes one door to open up another, though this is not the easiest time it’s part of life and part of the business of being a professional,” Harris posted via Instagram. “I want to personally thank the fans for the support you’ve showed myself and teammates since the day that I got here.”

“Love it," he said. "I think Tobias is a potential All-Star in our league.”

The Pistons had pursued Harris last offseason. but he re-signed with the Magic at four years, $64 million as a restricted free agent. They see getting Harris now as an early jump on this year’s free-agent crop.

“We looked at this as a player that we would want to add as a free agent — and have wanted to add as a free agent,” Bower said. “He’s a player that we have a long-term outlook with and feel that we used our cap space for the summer on a very valuable player for us and we get the added benefit of having him available to us for the stretch run this year.”

Van Gundy said in recent weeks he wasn’t willing to give up assets for a player with an expiring contract. With this proposed trade, the Pistons would get a long-term asset to go along with Jackson.

Jennings, who played in 23 games this season after recovering from a ruptured Achilles in January 2015, averaged 6.8 points, 2.0 rebounds and 3.0 assists in a reserve role. Ilyasova started 52 games and averaged 11.3 points and 5.4 rebounds after being acquired in a trade with the Bucks for Caron Butler and Shawne Williams in June.

“Thank You Detroit for everything,” Jennings posted via Twitter. “I had a great 3yrs. Some amazing Moments we had. Love!”

Thank You Detroit for everything. I had a great 3yrs. Some amazing Moments we had. Love!

The 2-for-1 trade opens a roster spot and leaves veteran Steve Blake as the likely backup point guard, along with Spencer Dinwiddie.

The Pistons, however, may not be done before the NBA trade deadline at 3 p.m. Thursday.

“We’ll continue to investigate things and continue to talk with teams and continue discussions we’ve had in other areas,” Bower said. “This team has played well at times when Steve Blake has been getting the majority of minutes and Stan has a great deal of confidence in not only his abilities, but his poise and experience and that can play an even bigger role down the stretch.

“We will look at options up until the trade deadline, at every position.”

Other teams: Traded to Orlando in 2013 as part of the deal that sent guard J.J. Redick to Milwaukee.