All five starters scored in double figures in Game 2 and Andre Drummond bounced back with 20 points and seven rebounds.

Cleveland — The Pistons are in an 2-0 hole in their Eastern Conference best-of-seven series with the Cleveland Cavaliers.

They put forth another good effort for the first 24 minutes, but wilted in the second half. All five starters scored in double figures in Game 2 and Andre Drummond bounced back with 20 points and seven rebounds.

But the Pistons didn’t have an answer for the Cavs’ outside shooting — tying an NBA playoff record with 20 3-pointers (of 38).

The game plan entailed trying to defend Kevin Love better — and they did, as he held him to 16 points, 12 less than his Game 1 production.

But a loss is a loss and they’ll try to salvage the series as it heads to The Palace for Games 3 and 4.

Here are the position grades for Game 2:

Kentavious Caldwell-Pope continued to find his outside range, hitting a pair of 3-pointers and finishing with 13 points and played good defense on Kyrie Irving (22 points). Reggie Jackson still was limited in his ability to counter the Cavs’ attack on the pick-and-roll and was limited to 14 points and six assists, but only one turnover. Jackson will need to be more effective if the Pistons are going to even get a game in the series. Grade: C

Marcus Morris started on Love and Tobias Harris on LeBron James, but they switched back and forth throughout the game. James was more assertive, driving the lane and hitting 3-pointers, for 27 points. Harris and Morris combined to go 5-of-21 from the field and 24 points — clearly not enough. Morris had been in a hot shooting streak, but came back to his average, hitting 1-of-5 on 3-pointers. The offense wasn’t there in Game 2, but the defense on Love was markedly improved. Grade: C+

Andre Drummond scored the first basket and was much more engaged in the action early on. He finished with 20 points on 8-of-13 shooting, but his missed free throws (4-of-16) stalled the offense and helped the Cavs erase their deficit. He didn’t have the rebound totals that he’s accustomed to, but he was active on defense and was a factor early. He’ll need to do more of that for the rest of the series. Grade: B

The Pistons got nine points from Stanley Johnson again, but only eight from the rest of the bench, with more minutes because of the lopsided score late in the game. After 7-of-8 shooting in Game 1, the reserves were 9-of-18, some of which came in the final minutes when the game already was out of reach. Anthony Tolliver played, but was scoreless in nine minutes and Steve Blake was almost invisible. Grade: C-

Stan Van Gundy made some good adjustments to guarding Love from the opener, but didn’t stop either of the big runs in the second and third quarters, which proved to be the Pistons’ undoing. He was forced into playing the bench more than he wanted, but didn’t stop the bleeding when things were getting out of hand. If they can’t score off the pick-and-roll, they’ll have to hit shots — and they didn’t in Game 2. Even Van Gundy himself admitted that he has to go back to the drawing board on some of his decisions. Grade: C 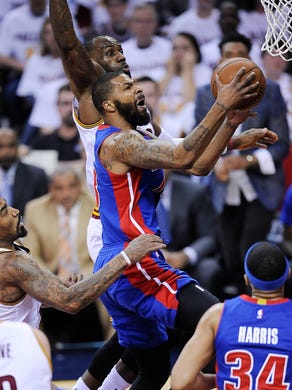 The Pistons' Andre Drummond shoots over the Cavaliers' Tristan Thompson in the second quarter. Drummond was fouled on the play. Clarence Tabb Jr, Detroit News
Fullscreen