Everyone can put to rest the talk of Pistons rookie Stanley Johnson being in LeBron James’ head. 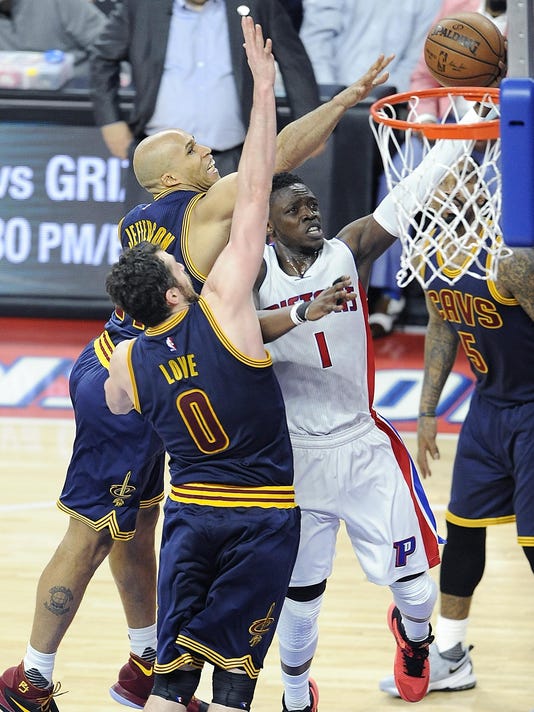 Auburn Hills — Everyone can put to rest the talk of Pistons rookie Stanley Johnson being in LeBron James’ head.

James had another solid effort (20 points, 13 rebounds, seven assists) in the Cavaliers 101-91 win in Game 3 of the Eastern Conference first-round series Friday night at The Palace to put the Pistons in an 0-3 hole.

But the problem wasn’t Johnson’s mouth, it was the lack of rebounding by the Pistons and not getting to some 50-50 balls in their first home playoff game in seven years.

How bad was it?

It was at this time James had a double-double (13 points, 10 rebounds) with six assists, but still limited to 6-for-17 shooting. He finished 8-for-24.

James made a three-point play (basket and free throw) after being fouled by Johnson to start the fourth quarter to open up a 82-73 lead and the Pistons never recovered.

The Pistons pulled within 87-86 on Tobias Harris’ baseline jumper, but Kyrie Irving made a 3-pointer and Kevin Love scored off a tip for a 92-86 lead with five minutes left.

“We got outrebounded by 14,” Pistons coach Stan Van Gundy said. “Rebounding has been one of our strengths all year. It’s been terrible in this series.”

In the end, the Cleveland held a 46-32 rebounding advantage, 12-5 at the offensive end, resulting in a 17-9 advantage on second-chance opportunities.

It was similar to Game 1 when Cleveland held a 40-37 advantage.

Pistons center Andre Drummond was limited to a single rebound in the first half, but came out with energy to start the second half. He had five rebounds, three on the offensive end during the first six minutes of the third quarter, to help the Pistons take a 62-59 lead.

But, Drummond couldn’t sustain his strong play, missing a pair of inside shots while the Cavaliers went on a 8-2 run.

“He had energy, but Tristan Thompson had eight offensive rebounds,” Van Gundy said of Drummond. “Hardly a dominating performance. He had offensive energy.”

Some of Cleveland’s offensive rebounds came off of its 3-point misses, but then again the Cavaliers made enough long-range shots (12-for-29), including Kyrie Irving’s 3-pointer from the right corner with 43 seconds left for a 98-90 lead.

“The rationale on Stanley Johnson, I played what I thought were my five best players,” Van Gundy said.