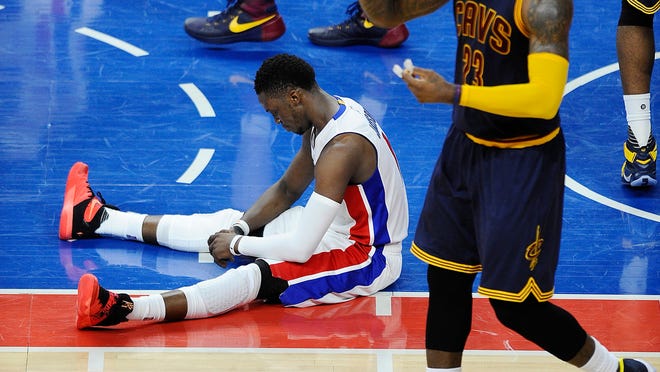 The Cavs made the big plays late. The Pistons didn't, and it cost them in a 101-91 loss in Game 3 that puts the young team on the brink of elimination, trailing 3-0 in the series.

Kentavious Caldwell-Pope missed a wide open corner 3-pointer, the Pistons couldn't corral another defensive rebound, and even though J.R. Smith missed a 3-pointer, the Pistons lost 24 seconds while trailing by five with under two minutes remaining. Reggie Jackson threw up a terrible shot in traffic, but the Pistons got another stop. Jackson again made a bad decision, forcing the action and turning the ball over in the lane.

The Pistons deflected a LeBron James pass out of bounds with 0.7 on the shot clock and 45 seconds remaining in the game.

That's when Kyrie Irving hit the dagger, a fading away 3-pointer from the corner that buried Detroit.

Cleveland was paced by Irving with 26 points, while James and Kevin Love both had 20.

The Pistons will be left to wonder what could have been if they just would've been able to hit the defensive glass a little harder. The Cavs grabbed 12 offensive rebounds, compared to the Pistons' five. Second chance points were 17-0 in favor of Cleveland.

All five Pistons starters scored in double figures, led by KCP's 18 and Andre Drummond's 17. Drummond was not on the floor for the final six minutes of the game because of his free throw issues.

Big shots on both ends

Kyrie Irving knocked down a 3-pointer out of the timeout, Kevin Love stretched Cleveland's second-chance points advantage to 17-0 with a put back bucket and the Cavs are still holding off the Pistons, 95-90, with 2:48 remaining.

The Pistons hit back with another big shot from Tobias Harris and a fast break dunk by Kentavious Caldwell-Pope right in LeBron James' grill. J.R. Smith continued the trend of big buckets, hitting a dagger from the corner for Cleveland.

Pistons get a couple big buckets

Tobias Harris got a bucket and a steal, Marcus Morris got one to go on a tough drive to the hoop then knocked down two free throws after going back to the well. Then Harris got another to go and the Pistons are on an 8-0 run and have cut into the Cleveland lead, 87-86, with 6:19 remaining.

With their season seemingly on the line tonight should they lose, the Pistons aren't going down without a fight.

LeBron looks primed to take over

The Pistons bench is getting a blow, but Cleveland has left LeBron James on the court and that's been a killer for Detroit going back to Games 1 and 2.

James struck right off the bat with a 3-point play on one end, but Kentavious Caldwell-Pope (the one starter on the court) answered with an and-1 of his own.

That's when James showed off his cold-blooded side, knocking down a 3-pointer.

KCP tried for one of his own on the other end, but he couldn't answer this time.

The Pistons aren't hitting the defensive boards and they're leaving men open on the perimeter. Basically, they look lost on defense.

Thankfully, this time around, the Pistons are making enough buckets to at least hang around with the Cavs heading into the fourth quarter.

Second chances points have been a killer and Andre Drummond even tapped one into his own bucket as he fought for position with Tristan Thompson for a rebound. The Cavs have 10 offensive rebounds on the night.

Kyrie Irving continues to be a problem wit his game-high 20 points. Kevin Love has 18 to follow.

Drummond lead the Pistons with 17.

Andre Drummond missed an easy lay up and the Cavs took the rebound and ran, getting Kyrie Irving an easy bucket on the other end. That's what's known as a 4-point swing. Not exactly something an 8-seed and heavy underdog can afford.

Drummond gets Pistons going after sluggish start to 2nd half

The Pistons and Cavs combined to miss the first seven shots of the second half. Kyrie Irving broke up that streak, working himself into the paint for an easy two points.

Things picked up for the Pistons after Andre Drummond was called for a technical foul, and the Pistons have taken back the lead, 62-59, with 6:35 to play in the third quarter thanks to a 7-0 run sparked by a couple Andre Drummond buckets.

Drummond was called for a technical foul after drawing a foul on LeBron James then wiping him to the floor. Kyrie Irving hit the freebie, but Drummond finally got his team off the snide with a bucket on the other end. Cleveland had really turned up the defense on the Pistons just as they did in the third quarter of Game 2. The Pistons missed their first seven shots of the half, but they've responded well.

The Pistons shot 60 percent in the first half, while the Cavs shot 55 percent. Those numbers are down to 53 and 47, respectively.

Heated first half sets up for fun second half

Stanley Johnson made sure to back up his big talk with a nice first half off the bench for the Pistons. The rookie scored nine points, while the target of his words, LeBron James, put up 11, including five down the stretch in the second quarter.

As it stands, the Cavs and Pistons have been trading buckets and it's Cleveland on top, 54-53, at the half.

Andre Drummond has been a force down low before being relegated to the bench when Cleveland went to intentionally fouling the big man. Drummond led Detroit with 11 first half points. Marcus Morris has scored 10, while Reggie Jackson has nine points and five assists.

Kyrie Irving has been the spark for Cleveland, which made a late first half push thanks to offensive rebounding and second chance opportunities (directly related to Drummond being on the bench).

The emotion in this series is close to boiling over. Everything is being contested and the crowd is all over LeBron every time he touches the ball, setting up for a most interesting second half.

Kevin Love has 11 points for Cleveland.

Pistons and Cavs battling before the half

Reggie Jackson saved the ball from going into the backcourt and Tobias Harris rewarded his efforts with a buzzer-beating 3-pointer to give the Pistons a 5-point lead.

Andre Drummond continues to be a force around the rim for Detroit. He's got 11 points now and has done really well against the smaller Cavs' lineups. With just over five minutes left in the half, Cleveland went to hack-a-Drummond, and the Pistons' big man split the pair.

Kyrie Irving is the driving force behind the Cleveland attack right now, putting up 11 points. Matthew Dellavedova has a couple big baskets off the bench on his way to eight points.

Prior to that, Stanley Johnson and LeBron James continued to stage their battle, trading buckets out of the last timeout.

Stanley Johnson found himself on the court for the first time in the second quarter. With LeBron James also in the game, a little extra juice has been added to this game after the words Johnson has spoken over the past week about how he's in The King's head.

Well, not that it means too much, but Johnson drew first blood in the 1-on-1 match up, knocking down two free throws after a tough drive to the bucket. James drew a foul on Johnson, but the big story to start the second quarter has been two 3-pointers from Iman Shumpert for Cleveland, which now leads, 33-31, with 8:51 to play until halftime.

Game 3 is shaping up a lot like the first two games of the series: The Pistons are playing well, hanging with the Cavs, even dictating the action at points. Perhaps the one factor that can help the Pistons sustain this kind of performance is the home crowd, who has more than done its part in harassing LeBron James and making it voice heard in the first quarter.

As it stands, the Pistons lead Cleveland, 27-24, at the end of the first frame.

Marcus Morris has eight points to lead the Pistons. Reggie Jackson has seven points and three assists, and Andre Drummond has six points.

Kyrie Irving, who put up 30 in Game 1, leads the Cavs with eight. Kevin Love has seven points and five rebounds, and James has scored four.

Nobody's buying what The King is selling

LeBron James tried to sell the officials that he should have got a flagrant foul call after barely being clipped by Marcus Morris, who was going for a block from behind. The refs disagreed with The King after reviewing the play. Then James tried to set up shop at the free throw line even though he clearly passed the ball to Kevin Love in the corner. After receiving boos throughout the first quarter from The Palace crowd, James is doing little get Pistons fans off his back.

A 6-0 run by the Pistons gave them a six-point cushion, but J.R. Smith finally connected from beyond the arc and it's 21-20, Pistons lead with 2:27 to play in the first quarter.

Pistons out to early lead on Cavs

LeBron James may be one of the most popular sports figures in the world, but not tonight in Auburn Hills. James has been booed every time he's touched the ball and The Palace crowd is definitely behind its team in the early going.

Solid defense led to a fast break for the Pistons, where Reggie Jackson found Kentavious Caldwell-Pope for a score and a foul before the game's first timeout.

The Pistons found Andre Drummond right away and the big man delivered with a left-handed hook for the game's first bucket.​

James had an answer, driving hard to the bucket on the Cavs' first possession and throwing down a monster, two-handed jam.

After both teams struggled with shot selection (the Cavs, for some reason ran three straight possessions that ended up with J.R. Smith firing up three bricks), Drummond was able to get another easy bucket.

Kyrie Irving, who showed in Game 1 that he is capable of winning this series himself, got two straight buckets to put Cleveland out in front for the first time, but Marcus Morris answered with a pair from the charity stripe.

Both teams are starting to settle into their offense after a shaky start followed the opening buckets.

What: Third of a seven-game first-round series (Cavs lead 2-0)

Where: Palace of Auburn Hills