Kentavious Caldwell-Pope made several big plays to keep the Pistons close in Game 3. 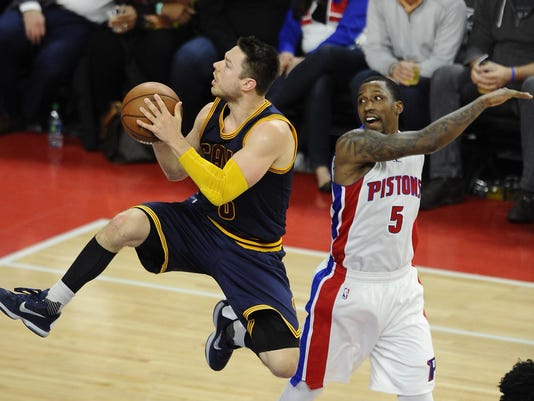 Kentavious Caldwell-Pope, 23, had been arguably the Pistons’ most consistent player during the first three games of the series(Photo: Daniel Mears / Detroit News)

Auburn Hills — The Pistons have one of the youngest backcourts in the NBA in Reggie Jackson and Kentavious Caldwell-Pope and they will be aided by the playoff experience they received in the Eastern Conference first-round series with top-seeded Cleveland moving forward.

Caldwell-Pope, 23, had been arguably the Pistons’ most consistent player during the first three games of the series — all losses — averaging 17.3 points and shooting 47.5 percent from the field while also making 9-of-22 3-pointers.

Caldwell-Pope made several big plays to keep the Pistons close in Game 3 when the Cavaliers looked like they would run away, including a three-point play in the opening minute of the fourth quarter to cut the deficit to 82-76.

Jackson, who turned 26 last week, got his wish last season to become a starting point guard when he was acquired by the Pistons from Oklahoma City, where he played a backup role to Russell Westbrook.

Jackson averaged 14.7 points and 8.3 assists with a 5-to-1 turnover ratio in the first three games, but failed to get things done down the stretch in a 101-91 Game 3 loss Friday night in the Pistons’ first home playoff game in seven years.

Jackson’s long pass led to a dunk by Caldwell-Pope in transition to pull the Pistons within 92-90 with 3:56 left to get the fans on their feet, believing a comeback win was on its way, but it would be their final basket of the game.

Cleveland’s guards JR Smith and Kyrie Irving made 3-pointers to extend the Cavs’ lead to 98-90,

Yes, the Cavs’ playoff experience paid off with the game on the line, a time when Caldwell-Pope missed a long-range shot with 2:33 remaining and Jackson — with the Pistons trailing 95-90 — lost the ball out of bounds for his lone turnover with 1:08 remaining.

Cleveland has a young point guard in the 24-year-old Irving and a 30-year-old veteran as his sidekick in Smith.

Irving already has a year of playoff experience under his belt, along with a great leader in LeBron James to get in his ear. Smith has enjoyed a pair of long playoff runs, one with Denver in 2009 when the Nuggets advanced to the Western Conference finals against the Lakers and another with the Cavaliers last season.

The fact is when Jackson shoots the ball well the Pistons have a strong chance of winning. In Game 1, he scored 17 on 7-of-12 shooting when they held a fourth-quarter lead in Cleveland before falling 106-101.

Still, the playoff experience should lead to future success for Jackson and Caldwell-Pope and those late-game failures could and should turn into clutch-play makes down the stretch in years to come.