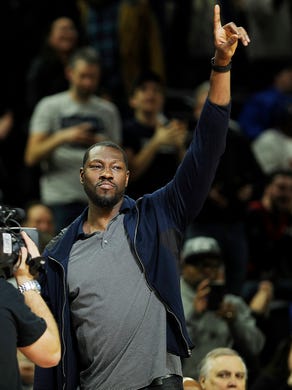 Heat's Josh Richardson (0) tries to get a shot off between Pistons' Tobias Harris (34) and Marcus Morris (13) during the first quarter. Gregory Shamus, Getty Images
Fullscreen

Heat's Hassan Whiteside (21) tries to get a shot off around Pistons' Andre Drummond (0) during the first half. Gregory Shamus, Getty Images
Fullscreen

Heat's James Johnson (16) gets a first half shot off next to Pistons' Andre Drummond (0) at the Palace of Auburn Hills. Gregory Shamus, Getty Images
Fullscreen

Auburn Hills — In the fourth quarter, the Pistons had all the feel of a team with their season on the brink. Throughout the game, the energy came in stretches and went away just as quickly.

Like most of the season, the Pistons fluttered between mediocre defense and fleeting offense. And in what likely was the most important game of their season, their production settled somewhere in the middle.

They found a second gear when they needed it in the second half, erasing a 12-point third-quarter deficit — but a tip-in at the buzzer by Hassan Whiteside gave the Miami Heat a critical 97-96 win on Tuesday night at The Palace, stunning a crowd that became raucous after the comeback.

The loss dropped the Pistons 2½ games behind the Heat for eighth place in the Eastern Conference playoff race — and likely was the knockout blow to their postseason hopes.

It’s going to be a rocky road if the Pistons are going to get there, after losing for the eighth time in the last nine games. They sit in 10th place, 1½ game behind the Chicago Bulls for ninth and 2½ behind the Heat for the eighth and final spot. They don’t hold the tiebreaker against either team, so their chances are even slimmer.

Pistons coach discusses 97-96 defeat to the Heat, which puts the his team 2½ games behind Miami for the final playoff spot in the Eastern Conference.

“Our team fought hard and it’s tough to lose like that — and it’s tough for me because I could have made better decisions that would have won us the game,” Van Gundy said.

“It’s a game we should have won and it’s tough. A couple different decisions by me and we would have won the game.”

One of those decisions came after he kept Stanley Johnson in the game during crunch time in the final minutes. Johnson got a technical foul after stepping over the sideline on a Heat inbounds play with 30.1 seconds remaining. The Pistons were leading by four and Goran Dragic (28 points) made the free throw to trim the lead to three.

On the ensuing possession, Dragic scored a lay-in with 24.5 seconds left and the margin was just one.

Johnson was tied up and lost a jump-ball, giving the Heat (36-38) the ball with 14.3 seconds remaining, setting up the final possession. After two misses, Whiteside used his long reach to get over Andre Drummond for the winning putback at the buzzer.

After a video review, officials confirmed that Whiteside’s tip came before the clock expired and the game was over.

Kentavious Caldwell-Pope had 25 points and Ish Smith and Tobias Harris 19 each for the Pistons. Caldwell-Pope had a go-ahead 3-pointer to make it 94-92 with 45 seconds and Smith added a jumper with 30.1 seconds for a four-point margin.

The Pistons had their biggest deficit, 72-60, at the 6:09 mark of the third quarter and the season looked to be fading away. But Harris followed with a 3-pointer and Caldwell-Pope a lay-in to trim it to seven. After a dunk by Whiteside (17 points and nine rebounds), Caldwell-Pope hit another jumper.

Udrih hit two free throws to make it 78-69 to start the fourth. The Pistons made their final drive early in the period, with a quick 10-2 run to start, including a jumper by Marcus Morris, a free throw and 3-pointer by Harris, and back-to-back baskets by Aron Baynes.

The Heat answered with a 3-pointer and two free throws from Johnson and after a 3-pointer by Morris, Johnson had a highlight-reel dunk over Morris for an 87-82 lead.

Caldwell-Pope had a 3-pointer and Drummond converted a three-point play and the Pistons pulled ahead, 88-87 with 4:34 left.