Check out a breakdown of Thursday's NBA draft from Al Willman of The Detroit News. 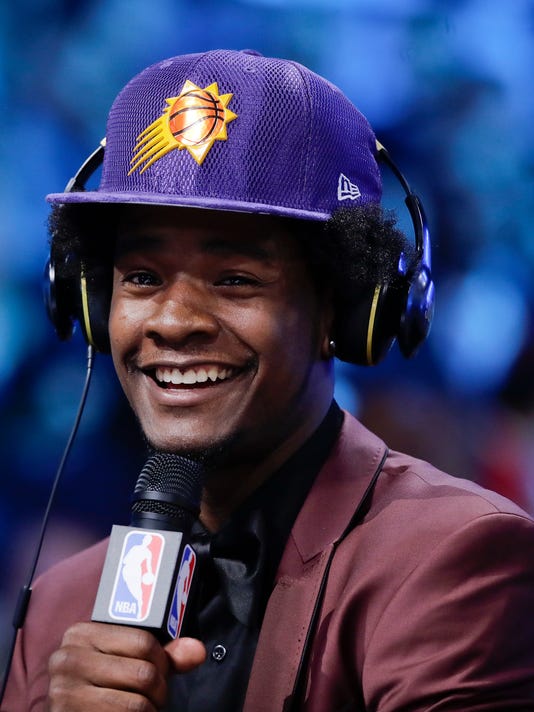 Kansas star and Detroit native Josh Jackson is all smiles after being selected with the No. 4 overall pick in Thursday's NBA draft.(Photo: Frank Franklin II, Associated Press)

In total, four in-state athletes were selected -- two in the first round and two in the second.

Josh Jackson (Detroit Consortium) and Kyle Kuzma (Burton Bentley) were taken in the first round, while Monte Morris (Flint Beecher) and Edmond Sumner (Detroit Country Day) went in the second.

Jackson was taken fourth overall by the Phoenix Suns. Kuzma went 27th to the Utah Jazz, but was later traded to the Los Angeles Lakers. Morris was taken by the Denver Nuggets with the 51st pick, while the New Orleans Pelicans selected Sumner with the next pick, before trading him to the Indiana Pacers for cash considerations.

A record 14 freshmen were taken in the first 20 picks.

For a full list of draft picks, scroll to the bottom of the page.

It took until late in the second round, but two more college players from Michigan -- the state, not the school -- were drafted.

There have been four in-state players drafted. Josh Jackson (Detroit Consortium) and Kyle Kuzma (Burton Bentley) were taken in the first round.

Detroit native and Kansas wing Josh Jackson was the first local player to be selected in the 2017 NBA Draft, going No. 4 overall to the Phoenix Suns. Frank Franklin II, Associated Press
Fullscreen 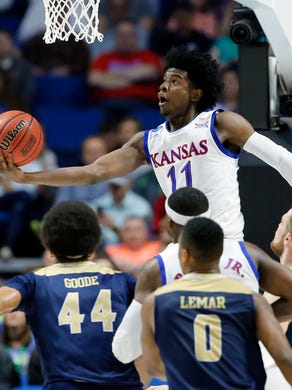 Jackson averaged 16.3 points and 7.4 rebounds in his lone season at Kansas, which earned him Big 12 freshman of the year honors. Tony Gutierrez, Associated Press
Fullscreen

Jackson starred at Detroit Consortium for two years before moving to California for his final two years of high school. He led Consortium to the Class C state title in 2014. David Guralnick, The Detroit News
Fullscreen

Michigan forward D.J. Wilson was taken with the No. 17 overall pick by the Milwaukee Bucks. Robin Buckson, The Detroit News
Fullscreen

Wilson is the sixth Wolverine to be drafted in the first round in the last five years. Rob Carr, Getty Images
Fullscreen

Utah forward Kyle Kuzma was drafted No. 27 overall by the Brooklyn Nets and had his rights traded to the Los Angeles Lakers. Rick Bowmer, Associated Press
Fullscreen

Flint's Kyle Kuzma has the talent to excel in his first season with the Lakers, ESPN predicts. Ben Margot, Associated Press
Fullscreen

Morris led the nation with a 5.17 assist-to-turnover ratio this past season. Sue Ogrocki, Associated Press
Fullscreen

Morris was a standout at Flint Beecher, where he led to back-to-back Class C state titles in 2012 and 2013. Elizabeth Conley, The Detroit News
Fullscreen

Xavier guard Edmond Sumner was selected with the No. 52. overall pick by the New Orleans Pelicans before his rights were traded to the Indiana Pacers. John Minchillo, Associated Press
Fullscreen

The last pick of the first round, No. 30, was Villanova shooting guard Josh Hart. He was picked by the Utah Jazz, but will go to the Los Angeles Lakers as part of an earlier trade. Hart averaged 18.7 points in 36 games for the Wildcats.

The San Antonio Spurs took Colorado point guard Derrick White with the 29th pick. He averaged 18.1 points in 34 games with the Buffaloes.

The Los Angeles Lakers drafted North Carolina center Tony Bradley with the 28th pick, but will trade him to the Utah Jazz for No. 30 and a pick in the second round. He averaged 7.1 points and 5.1 rebounds in his only season with the Tar Heels.

The Brooklyn Nets selected University of Utah small forward Kyle Kuzma, of Flint, with the 27th pick. Kuzma will go to the Los Angeles Lakers, as part of a trade for D'Angelo Russell and Timofey Mosgov. Kuzma averaged 16.4 points and 9.3 rebounds for the Utes last season.

The Portland Trail Blazers took Purdue power forward Caleb Swanigan with the 26th pick. Once a Michigan State commit, he averaged 18.5 points and 12.5 rebounds in 35 games for the Boilermakers last season.

The Orlando Magic, with the 25th pick, took Latvian center Anezjs Pasecniks. The 7-foot-2, 229 pounder averaged 7.8 points in 35 games for Gran Canaria International this past season.

The Utah Jazz took Syracuse power forward Tyler Lydon for the Denver Nuggets at No. 24. The Jazz will trade the rights to Lydon to the Nuggets as part of a trade earlier in the first round in which the Nuggets took Louisville shooting guard Donovan Mitchell.

The Brooklyn Nets took Texas center Jarrett Allen with the 22nd pick. He averaged 13.4 points and 8.5 rebounds in his only season with the Longhorns.

The Oklahoma City Thunder selected shooting guard Terrance Ferguson, a Dallas, Texas native who played in the National Basketball League in Australia out of high school.

The Portland Trail Blazers, with the 21st pick, took Duke power forward Harry Giles for the Sacramento Kings, who swapped picks earlier in the first round. Giles, who has had tears in both ACLs, averaged 3.9 points and 3.8 rebounds in 26 games for the Blue Devils last season.

14 of the draft's 20 picks are freshmen, setting a new record.

The Indiana Pacers took UCLA power forward TJ Leaf with the 18th pick. The freshman averaged 16.3 points and 8.2 rebounds in 35 games with the Bruins.

Michigan junior forward D.J. Wilson was drafted by the Milwaukee Bucks with the 17th pick. Wilson, who was predicted to go late in the first round by some experts, averaged 11 points and 5.3 rebounds for the Wolverines, who won the Big Ten title last season.

Bulls draft Patton for T-Wolves at 16

Justin Patton, who played center at Creighton, was selected by the Chicago Bulls at No. 16. Patton will go to the Minnesota Timberwolves in the trade that sent Jimmy Butler to Minnesota.

The Portland Trailblazers, picking for the Sacramento Kings, took North Carolina shooting guard Justin Jackson with the 15th pick. averaged 18.3 points and 2.8 assists with the Tar Heels in 2016-17.

The Miami Heat closed out the lottery picks by selecting Kentucky power forward Bam Adebayo with the 14th pick. He averaged 13 points and eight rebounds with the Wildcats in 38 games last season.

Louisville shooting guard Donovan Mitchell went at No. 13 to the Denver Nuggets, who traded him to the Utah Jazz for power forward Trey Lyles and the No. 24 pick. Mitchell, who many Pistons fans on social media wanted in Detroit, averaged 15.6 points and 4.9 rebounds in 34 games with the Cardinals.

With the 12th pick, the Pistons selected Duke shooting guard Luke Kennard. The 6-foot-5, 180 pounder averaged 19.5 points and 5.1 rebounds in 37 games with the Blue Devils.

The Charlotte Hornets took Kentucky shooting guard Malik Monk with the 11th pick. The freshman, who for some was a target of the Pistons, averaged 19.8 points per game for the Wildcats.

The Dallas Mavericks took North Carolina State point guard Dennis Smith Jr. with the ninth pick. The last time the Mavericks had a top-10 pick, they selected former Michigan big man Robert "Tractor" Traylor, before flipping him for Dirk Nowitzki, who just played his last of 19 seasons in Dallas this spring.

French PG to Knicks at 8

Ending a run of freshmen, who took up the first seven picks of the draft, the New York Knicks selected French point guard Frank Ntilikina with the eighth pick.

The Minnesota Timberwolves, with the seventh pick, took Arizona power forward Lauri Markkanen, from Finland as part of a trade with the Chicago Bulls, who are sending small forward Jimmy Butler and the 16th pick to the Timberwolves for guards Kris Dunn and Zack LeVine, as well as the rights to Markkanen.

With the sixth pick, the Orlando Magic selected Florida State small forward Jonathan Isaac. He averaged 12 points per game with the Seminoles in 2016-17.

Fox to Kings at 5

The Phoenix Suns took Kentucky point guard De'Aaron Fox with the fifth pick. Fox, a freshman, averaged 16.7 points per game with the Wildcats.

With the fourth pick, the Phoenix Suns selected Kansas small forward Josh Jackson. He played for a short time at Detroit Consortium, before moving to Napa, Calif. ahead of his one season with the Jayhawks.

Jackson averaged 16.3 points and 7.4 rebounds, while shooting 51.3 percent in one season at Kansas.

Tatum to Celtics at 3

With the third pick, the Boston Celtics took Duke small forward -- and third consecutive freshman -- Jayson Tatum. He averaged 16.8 points and shot 45 percent for the Blue Devils in 2016-17.

After much national speculation, the Los Angeles Lakers made their much-awaited No. 2 pick, selecting UCLA point guard Lonzo Ball. Another one-and-done star, Ball averaged just 14.6 points and 7.6 assists in 35.1 minutes per game with the Bruins this past season.

With the first pick, the Philadelphia 76ers selected point guard Markelle Fultz. He averaged 23.2 points per game in one season with the Huskies.

5 guards for the Pistons: Shooter could be had at No. 12