This will be the first professional basketball team in Las Vegas, which recently landed an NHL team. 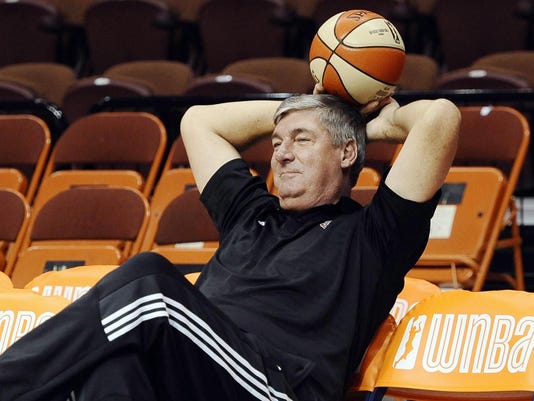 New York — Bill Laimbeer found himself at a crossroad.

His contract with the New York Liberty was up and he wasn’t sure if he wanted to stay or move on. He had spent the last few years grooming Katie Smith to be the team’s next head coach and felt the time was right for her to take over the team, which lost in the second round of the playoffs for the second consecutive year.

The 60-year-old Laimbeer could stay with New York as the team’s general manager or find employment elsewhere.

His decision was made a bit easier when his phone rang a few weeks ago. An executive at MGM Resorts International asked him to be the coach and president of the new WNBA team that was moving from San Antonio to Las Vegas.

“I said I’d talk to my wife,” said Laimbeer, the former Detroit Pistons “Bad Boy.” “At the end of the day, I like challenge and I think this would be a great experience.”

Laimbeer accepted the new position, which he will start Nov. 1.

“I’m looking at a huge task in front of me,” Laimbeer said. “First I have to build a staff from everything from video coordinator and interns to my assistants to basketball ops people. I’ve been making lists and lists and lists.”

His task is a little easier than other startup franchises because MGM has been in the entertainment business for years.

“I think it’s new to them. They understand arenas, they understand all that goes into the logistics and selling tickets,” Laimbeer said. “The basketball part they are into, but it’s not something they’ve really done before. I have the experience that I can navigate and explain what this is and how it works and what the opportunities are. I know all the infrastructure and the how-to. My job is to set everything up.”

Finding those people won’t be so hard, as Laimbeer said his phone has been ringing nonstop since it was announced he took the job.

MGM will not be the first company with casino holdings to own a WNBA team. The Mohegan Sun owns the team in Connecticut. The blueprint for Nevada is somewhat similar.

“While other teams are restocking their cupboards, we have to order things from scratch like basketballs, athletic tape, nearly everything,” Laimbeer said.

This will be the first professional basketball team in Las Vegas, which has become a coveted target for sports franchises over the past few years.

The expansion Vegas Golden Knights began their first NHL season this month. In March, the NFL formally approved the Oakland Raiders’ relocation to Las Vegas by the 2020 season to occupy a proposed new stadium on the Las Vegas Strip, although the deal wasn’t approved until casino mogul Sheldon Adelson pulled out of the financing plan.

The Golden Knights play at MGM’s T-Mobile Arena, but the casino doesn’t own the team.

“This is the first pro sports team that MGM resorts owns and it’s a great alignment frankly with the DNA of our company,” said Lilian Tomovich, MGM’s chief experience and marketing officer.

Laimbeer inherits a team that finished with the worst record the past three years. San Antonio has a talented young nucleus with Kayla McBride, Moriah Jefferson and Kelsey Plum. The team also has the top chance to get the No. 1 pick in next year’s draft.

“They need a change of culture,” said Laimbeer, who led the Detroit Shock to three WNBA titles. “Any time you get a team that’s beat down record-wise, you have to have a catalyst for a change. This is a tremendous catalyst. Going to an exciting venue and situation where there’s resources. I have been successful creating a team that can compete. We can break out of this thing.”

Laimbeer also thinks being in Las Vegas will be attractive to free agents.

“Players will want to come here,” he said. “All the signs point to a great opportunity. We have to pick up the pieces and make it happen.”

This is the second move for the franchise. It came to San Antonio from Utah in 2003. Led by Becky Hammon, the Stars reached the WNBA Finals in 2008.