After another slow start, the Pistons got it together quickly. And did they ever get it together.

Rod Beard breaks down the Pistons' win over Timberwolves.

Detroit — Pistons coach Stan Van Gundy can be very spirited and outspoken, especially when his team isn’t living up to his expectations.

It seems like an every-game occurrence and it happened again against the Minnesota Timberwolves. But after another slow start, the Pistons got it together quickly.

And did they ever get it together.

They gave up the first nine points of the game in less than three minutes and were staring at another double-digit deficit. They responded with a gut-check first quarter and added their best period of the season — a 40-point second-quarter outburst — and cruised to a 122-101 blowout victory over the Timberwolves on Wednesday night at Little Caesars Arena.

Tobias Harris tied his career high with 34 points, Avery Bradley added 20 points and Andre Drummond 15 points and 15 rebounds for the Pistons (3-2), who embark on a three-game west-coast trip this weekend.

“I don’t want to talk about (the first three minutes),” Van Gundy joked. “We played 45 minutes of really good ball, the most complete game we’ve played all year.”

The Pistons had struggled with their 3-point shooting in the first four games, ranking 25th with just 31 percent. The shots started falling — they hit 44 percent (15-of-34) in the game — against the Timberwolves, who were without All-Star forward Jimmy Butler, who missed his second straight game because of an upper-respiratory infection. 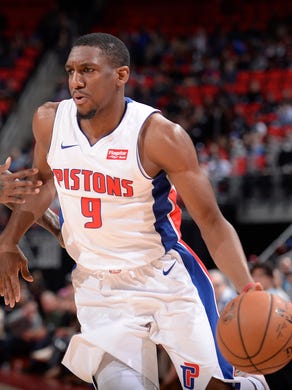 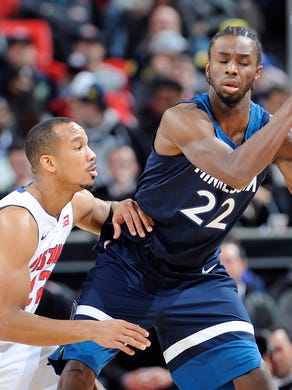 Timberwolves' Andrew Wiggins is called for an offensive foul in the third quarter. Ish Smith and Stanley Johnson defend on the play. Clarence Tabb Jr., The Detroit News
Fullscreen

Pistons' Andre Drummond and Reggie Jackson fight for a rebound in the first quarter. Drummond had 15 points and 15 rebounds. Clarence Tabb Jr., The Detroit News
Fullscreen

The Timberwolves (2-3) got off to a hot start, hitting four of their first five field goals. Jeff Teague (18 points), started with a lay-in and a 3-pointer, Andrew Wiggins (21 points) added a jumper and Karl-Anthony Towns (23 points and 10 rebounds) a lay-in.

The Pistons, who started 0-of-4 from the field, answered with a putback dunk by Drummond and a jumper by Bradley.

“The biggest thing is we wanted to come out with a better start,” Harris said. “When it was 9-0, we just wanted to let everybody get their spirits back up and lock into our goal of getting the first quarter off to a better start.”

Stanley Johnson (15 points) scored on a steal and lay-in — his first basket at home after going a combined 0-for-14 in the first two games at LCA. After a 3-pointer by Reggie Jackson (10 points) on the next possession, Towns countered with a 3-pointer and dunk for a 20-13 margin.

Johnson followed with another jumper and he scored seven of the Pistons’ next 10 points, building to his best offensive production of the season.

Pistons coach Stan Van Gundy on the win over the Timberwolves.

“Stanley had his best game of the year, but it was good to see him get out in transition,” Van Gundy said. “That’s one of the things we’ve been talking about. Not just him — all of our wings.”

The Pistons took the lead for good, 28-26, after Ish Smith (two points and 13 assists) got free for a backdoor cut and Langston Galloway added a 3-pointer. That spurt ignited a 28-9 run over the first 8:32 of the quarter and the Pistons were firmly in control the rest of the way. Harris had back-to-back dunks, plus a jumper and two 3-pointers in the flurry.

The Pistons had a season-high 32 assists on 48 field goals, showing their best ball movement in getting six players in double-figure scoring.

“We need to play that way and for some of our guys, this is really different; we’re trying to play with a lot of movement,” Van Gundy said. “In the past, it’s been give the ball to our point guard, run a pick-and-roll and everybody else stand in the corner and they make all the plays.

“It’s a lot of pressure on one guy and not enough pressure on the defense. We’re trying to play with more movement and guys enjoy it, but it’s harder, because you’re not standing around and you don’t get a rest at either end.”

The Pistons finished the half with another 7-2 flurry, punctuated by a 3-pointer by Bradley, and led, 63-44, at halftime.

Drummond got going in the third quarter, splitting a pair of free throws, then getting a pair of putback baskets, as the lead moved to 20. Bradley continued the onslaught with three straight baskets, but Towns had two field goals in a six-point Timberwolves run.

Harris started another rally, with a 3-pointer, Leuer scored on an alley-oop pass from Jackson and Johnson banked in a jumper, for the Pistons’ largest lead of the game, 86-61, with 5:15 left in the third quarter.

The Timberwolves weren’t done, though.

They finished the third with the last four points and scored the first four points of the fourth quarter, trimming the lead to 91-77.

Harris answered again, with a 3-pointer, Henry Ellenson (14 points, five rebounds) followed with a reverse scoop, and Harris ended the run with another 3-pointer, pushing the lead back to 99-77 with 9:38 left.

On the Pistons’ next possession, Ellenson provided an exclamation point, with a drive down the lane for a tomahawk dunk, sending the home crowd into a frenzy.

“It’s a good win for us. We played great team basketball on both ends of the floor,” Bradley said. “It was a complete game for us. I’m happy with the way we played and we just need to keep it going.”