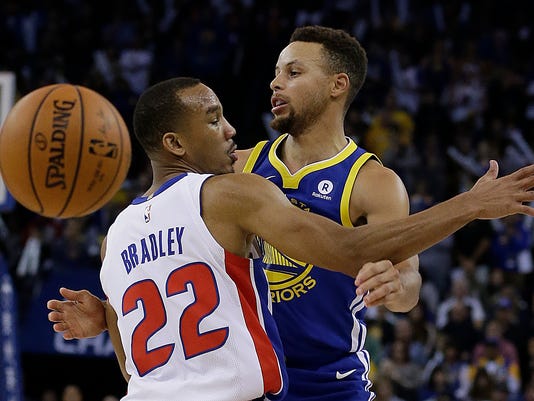 Oakland, Calif. — After getting a surprising win over the hottest team in the NBA on Saturday night, some fans thought the Pistons were playing with house money for the remainder of their three-game trip out west.

The Pistons won in Los Angeles — their first road win over the Clippers in seven years — and faced a difficult back-to-back in facing the defending-champion Golden State Warriors, against whom they also had lost seven straight.
Make that two droughts they’ve ended.

As has become the custom early this season, the Pistons overcame another double-digit deficit and shocked the Warriors, 115-107, in front of a sellout crowd at Oracle Arena.

Avery Bradley had 23 points, Reggie Jackson 22 points and five assists and Ish Smith and Stanley Johnson 16 points each for the Pistons (5-2), who finish the road trip against the Lakers on Tuesday night.

“We just fight. We’re fighting for 48 minutes, whether we’re up or down,” said Jackson, who had 18 of his points in the first half. “I think this team has just been tremendously focused — and so far, we have a never-say-die mentality.”

The Warriors (4-3) relied on their Big Three of Klay Thompson (29 points), Kevin Durant (28 points) and Steph Curry (27 points), who combined to shoot 66 percent (33-of-50) from the field — but no other Warriors player scored in double figures.

“The most pleasing thing about the win is they didn’t have a bad (shooting) night,” coach Stan Van Gundy said. “Their three guys shot the lights out; they shot 57 percent as a team; those three guys shot over 60 percent.

The Pistons took advantage of 26 Warriors turnovers and turned those into 33 points, mostly in transition, getting to their strength with their wing players.

Warriors coach Steve Kerr lamented the sloppy play — the Warriors have committed at least 16 turnovers in each of their first seven games.

“At some point, the ball just has to matter. The game has to matter enough for us to win,” Kerr said. “Teams are coming after us every single night and we know that. We are getting everybody’s best shot and if you don’t match that type of energy and play with some intelligence and discipline, you are not going to win.”

The Warriors led by as many as 14 points in the third quarter, but the Pistons chipped away, closing the period with a 10-0 run. Bradley hit a 3-pointer by Bradley, Anthony Tolliver made three free throws and Reggie Bullock added a lay-in.

Tolliver gave the Pistons the lead with a desperation fadeaway jumper, to finish with an 82-81 advantage heading into the fourth quarter.

The Pistons continued the onslaught with a 10-4 run to start the fourth, with eight points by Smith. Thompson stopped the run with a jumper, but the Pistons had a 9-1 spurt, with Johnson getting a steal and dunk, followed by a 3-pointer, for the largest Pistons lead, at 101-88, with 6:30 to go.

Durant spearheaded the Warriors’ comeback, with back-to-back 3-pointers, plus a driving highlight-reel dunk. Thompson added a 3-pointer and Durant two more free throws, getting the lead down to 103-101 with 3:39 left.

Andre Drummond (eight points, 18 rebounds) had the Pistons’ only basket in the Warriors’ 13-2 spurt, but Harris responded with a three-point play to push the lead back to five. Harris hit the biggest shot of the game, a 3-pointer with 1:34 to go, for a 111-105 margin.

Bradley added a steal and lay-in and Jackson scored on a drive, pushing the lead back to 10 in the final minute.
Van Gundy said the Pistons didn’t get too jubilant after Saturday’s win — and likely will keep an even keel Monday on their off before finishing the road trip.

“Yeah, it’s great, but look — and I’m not downplaying it — these two wins are great. I’m really proud of them but it truly is two (games) of 82,” Van Gundy said. “You can be really happy — and should be tonight. These guys should be very, very happy tonight and then tomorrow, you’ve got to get yourself ready to play again, because it’s a whole other deal.”

Detroit Pistons' Avery Bradley reaches for a loose ball on the floor beneath Golden State Warriors' Stephen Curry during the first half. Ben Margot, AP
Fullscreen