Pistons' Tobias Harris talks about Thanksgiving, giving back to the community. 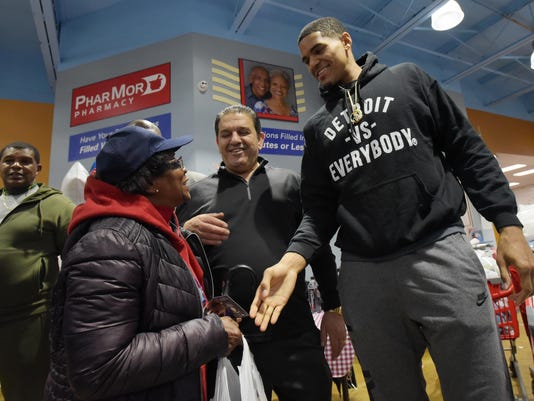 He’s not quite that type of basketball father. Instead, he tried to stay in the background and let his son have the limelight.

His son Tobias was a few feet away, helping to hand out 500 turkeys Tuesday night at Imperial Fresh Market on Detroit’s west side. It’s quite the juxtaposition to LaVar Ball, father of Lakers rookie Lonzo, who was on CNN on Monday, tossing verbal jabs at President Trump.

It’s a dual role of agent and father for Torrel, keeping track of Tobias’ career, as he’s quietly building his own basketball family dynasty.

And this year, he almost needs a planner to keep track of his five children: along with Tobias, his son Tyler is playing with the Windy City Bulls in the development league, daughter Tori is a freshman, playing for James Madison University, youngest son Terry is a junior forward at Eastern Michigan. Another son, Torrel Jr., lives in the Washington, D.C. area and the oldest daughter, Tesia, played basketball at St. Johns.

Tobias, donning a black “Detroit versus Everybody” sweatshirt, believes in helping out in the community, even going back to his early career with the Milwaukee Bucks and Orlando Magic.

“We always teach all our kids that you’re blessed to play in the NBA. When you have a blessing; you can’t just say you’re living your dream and be selfish about it — it’s all about giving back,” Torrel said. “It’s an expectation; it’s like waking up in the morning and brushing your teeth. It’s mandatory.”

The line stretched out the door, with community members who had vouchers distributed at local churches, schools and the Detroit Police Department. It’s something that Tobias wholeheartedly believes in and has been committed to community forums and reaching out to youth since he arrived from the Orlando Magic in February 2016.

Even on the day he was traded, he had a previous engagement with one of his mentor groups — and he kept the commitment to speak, even after he found out he was moving to the Pistons.

When he met Imperial Fresh Markets owner Ryan Shina, he sought out a way to make a partnership and impact the city positively. Tuesday was the first foray.

“So many people are here getting turkeys and they’ll be able to cook it and have a great Thanksgiving meal. That’s what it’s about: giving back and them sitting down with family members enjoying each other’s company,” Tobias said.

“When I was a kid, I understood what the time I met an NBA player meant to me. I’ll never let that go.

“I understand what it means for kids in that position and to being able to use the platform to show (being an NBA player) is more than just shooting basketballs and running up and down the court. There’s a lot that goes into it, caring for the community we play in.”

That civic responsibility comes from his father — and even when Tobias was a child, Torrel instilled that giving back to the community was part of the equation.

“I used to be a licensee of the NBA, so I used to have so much inventory and at Christmas and Thanksgiving, we used to just give merchandise out to everybody,” he said.

“My kids saw it when they were small and they know how fortunate and blessed they are. They just want to touch other people’s lives — it makes them feel good.”

Torrel told the story of how, early in Tobias career, he wanted to give away toys to children at Christmas.

After Torrel had exhausted the budget of about $5,000, Tobias wasn’t satisfied and wanted to do more than the 40 or so bikes and other gifts.

So they went and bout another $5,000 in computers and other gifts.

“On Christmas Day, he went out with all the gifts and knocked on all the doors and we had two trucks with bikes and everything and he felt so good with the smiles and happiness on all the kids’ faces,” Torrel recalled.

With basketball ingrained in the Harris household, it’s going to be different this year, with everyone in different cities, Torrel and wife Lisa — whose birthday is Thursday — will be able to enjoy Thanksgiving with Tobias before they head out to Oklahoma City.

“It’s always (an odd) time because everybody’s playing. Everybody’s in their areas now but we’re always checking in and communicating on a daily basis,” Tobias said. “That’s what family is about. We all motivate each other and joke on us. My sister was joking on us last night (after the loss to the Cavaliers).

“We all grew up in a really competitive state, trying to one-up each other and now we’re in a supportive basis. You see the evolution of a family growing and trying to achieve everybody’s goals.”

That includes Tyler, who was playing for the Clippers’ development league team, but was cut. His dream didn’t end there, though. Even in a moment of disappointment, the family came together to support him and keep Tyler in good spirits.

And something special happened: he was picked up by the Chicago Bulls’ affiliate team.

“Everybody was giving him so much support that he was just overwhelmed. The next day, Windy City picked him up and now he’s averaging 14 points and 8 rebounds a game,” Torrel said. “There’s always been that support, no matter what it is. It’s a really close-knit family.”

For Torrel and Lisa, New York natives from Harlem and Bedford-Stuyvesant, respectively, it’s more than just showing up on holiday.

“It’s important. They want to reach the people in need — it’s important. We want to do more. We want to create jobs. God places us all in situations for a reason,” Torrel said. “He’s going to build off what he did in Milwaukee and Orlando. Now he has a real plan — touch a lot of people’s lives in Detroit.

“It’s good seeing all these people come through here with smiles because Tobias Harris is showing love. That means more than the turkeys.”