The former Oakland University star joined his hometown team in January, but spent most of his time on a two-way contract playing in G.R. 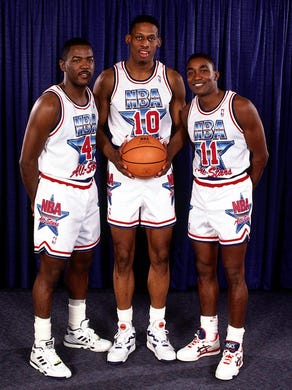 1. Isiah Thomas, 1981, first round, second overall — Coming off a miserable 21-61 record, the Pistons made an impact and got the face of the franchise in Thomas, a 12-time All-Star and five-time All-NBA selection. With back-to-back championships in 1989 and 1990, his legacy is cemented as one of the best players — if not the best — in franchise history and is among the 50 greatest players in NBA history. Detroit News photo archive
Fullscreen

2. Dennis Rodman, 1986, second round, 27th overall — Most fans didn’t even know that Southeastern Oklahoma State University existed, nor had they heard of Rodman, but along with John Salley (11th overall pick) he became a staple of the "Bad Boys" with his energy, defense and rebounding. Rodman won two titles with the Pistons and three more with the Bulls, and was a seven-time rebounding champion and eight-time All-Defensive Team selection. He might be one of the best second-round picks in the modern era. Brian Drake, Getty Images
Fullscreen

3. Joe Dumars, 1985, first round, 18th overall — When Dumars was drafted, he was something of an unknown out of small-college McNeese State. Pistons fans got to know him well, as a six-time All-Star, five-time All-Defensive selection, two-time champion and Finals MVP, as well as being elected to the Hall of Fame. He also was the team president from 2000-14. The 1985 draft is known for Patrick Ewing and Karl Malone, but Dumars’ name is just as important. Duane Burleson, Associated Press
Fullscreen

4. Dave Bing, 1966, first round, second overall — It’s hard — but not impossible, as Pistons fans know — to make a bad pick with the No. 2 selection as Bing was named rookie of the year. Bing was a prolific scorer, leading the league (27.1 points) in 1967-68. He played nine seasons in Detroit and averaged 22.6 points, 6.4 assists and 4.2 rebounds. Bing was also a seven-time All-Star and was selected to the Hall of Fame. His fame grew after he was elected mayor of Detroit. John Lyndsay, Associated Press
Fullscreen

5. Bob Lanier, 1970, first round, first overall — The top overall pick should be an impact player — and Lanier was for the Pistons in his 10 seasons, with seven All-Star selections. It was a loaded top of the draft, with Rudy Tomjanovich, Pete Maravich, Dave Cowens, Calvin Murphy and Tiny Archibald among the other big names. Lanier's career was derailed by injuries but he was selected to the Hall of Fame in 1992. Detroit News photo archive
Fullscreen 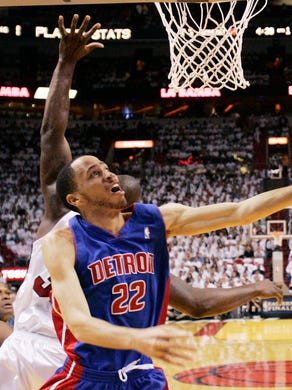 6. Tayshaun Prince, 2002, first round, 23rd overall — As the Pistons were gearing up for the “Goin’ to Work” run, Prince, a 6-foot-9, semi-elastic forward, became a steal for them late in the first round. He played more career games (1,017) than anyone in that draft class, including 792 games and 12 seasons in a Pistons uniform, and averaged 11.1 points and 4.3 rebounds to go along with an NBA title in 2004. Clarence Tabb, Jr., Detroit News
Fullscreen

7. Andre Drummond, 2012, first round, ninth overall — Some will scoff at the notion that Drummond would appear on this list, but he’s been solid in his six seasons, with a pair of All-Star Game appearances. He’s led the league in total offensive rebounds for five straight seasons and total rebounds for the past three. He already ranks 10th in NBA history in career rebounding average (13.4). Clarence Tabb Jr., Detroit News
Fullscreen

8. Kelly Tripucka, 1981, first round, 12th overall — As if getting Isiah Thomas with the No. 2 pick wasn’t enough, the Pistons double-dipped, getting Tripucka 10 spots later. He was a two-time All-Star, including his rookie season, when he posted 21.6 points, 5.4 rebounds and 3.3 assists, joining Thomas on the All-Rookie team. He went to the Utah Jazz in the trade for Adrian Dantley in 1986 that fueled the "Bad Boys" era. Detroit News photo archive
Fullscreen

9. Grant Hill, 1994, first round, third overall — The Pistons needed a face of the franchise and Hill was talented enough to become one of the faces of the whole league. A seven-time All-Star, Hill was a five-time All-NBA selection and the co-rookie of the year with Jason Kidd. He was selected to the Hall of Fame after injuries riddled the end of his promising playing career. His trade to the Orlando Magic helped get the building blocks for the "Going to Work" era. Dale Tait, Getty Images
Fullscreen

10. Dave DeBusschere, 1962 — A territorial selection, DeBusschere was a native Detroiter and starred at the University of Detroit Mercy after playing at Detroit Austin Catholic in high school. He was an eight-time All-Star, six-time All-Defensive selection and two-time champion. He averaged 16.1 points and 11 rebounds in his Hall of Fame career. Associated Press
Fullscreen

The Pistons have informed Felder they will not be making him a qualifying offer, which makes him an unrestricted free agent, his agent, Brandon Grier, told The Detroit News on Wednesday.

Later Wednesday, the Pistons signed Keenan Evans, an undrafted guard out of Texas Tech, according to a report by ESPN's Adrian Wojnarowski.

Evans was signed to a two-way contract, meaning he will be outside the Pistons' regular 15-player roster. Evans will spend the majority of his season with the Pistons' G-League team in Grand Rapids; he cannot be with the Pistons more than 45 days in the upcoming season.

Felder, 23, a 5-foot-9 guard and a former standout at Oakland University, joined the Pistons in January on a two-way contract, and spent most of his time playing for Grand Rapids of the G-League. He played only two games with the Pistons, after playing 14 games with the Chicago Bulls earlier in the season.

He began his career with the Cleveland Cavaliers, playing 42 games as a rookie before they traded him to the Atlanta Hawks prior to this past season, along with Richard Jefferson. The Hawks quickly waived him, and the Bulls signed him.Grier told The News there is interest from other teams as free-agency approaches.

Felder, one of the most-prolific scorers in Oakland history, left after his junior season, and was a second-round pick, 54th overall, by the Hawks, who then sold his rights to the Cavaliers. From Cleveland, he received a three-year, $2.4 million deal, with $1 million guaranteed.

His junior year at Oakland, he was fourth in the nation in scoring (24.4 points) and first in assists (9.3), and was a regular on the highlight shows, including ESPN's "SportsCenter," for his big-game performances against marquee opponents on national television.

Prior to Oakland, Felder starred at Detroit Pershing, which, in January, retired his No. 20.