After Sunday’s win against Phoenix, Andre Drummond wanted to make sure an issue from the past — free throws — don't complicate things in the future. 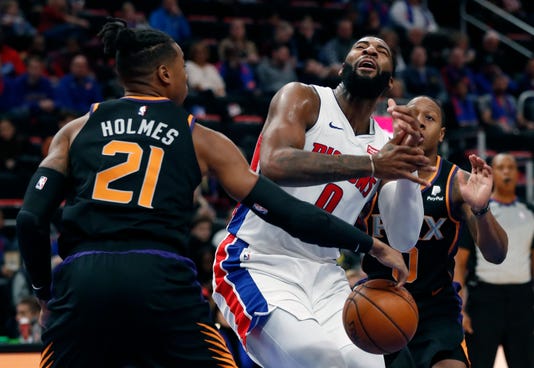 Auburn Hills — After Sunday’s win against Phoenix, Andre Drummond was nearly undressed in the locker room before he put some clothes back on and hit the Little Caesars Arena court.

The Pistons’ center wanted to make sure an issue from the past didn’t complicate things in the future.

“It’d been awhile since I missed that many in a row.”

After the 118-107 win, Drummond went out with assistant coaches Sean Sweeney and Tim Grgurich to shoot extra free throws, which were Drummond’s biggest hiccup early in his career.

With the Suns barely clinging to life in the fourth quarter, first-year coach Igor Kokoskov went with the “Hack-a-Dre” strategy, not seen in these parts for about a year because of Drummond’s improvement from the stripe.

So, with young fans waiting in line to shoot for a paid group promotion, the All-Star center took his turn at the line first, as the children happily looked on.

“I figured, ‘Let’s not keep that in my head,’” Drummond said. “Just try to get some up, see the ball go in and move on from it.”

Last year, teams stopped employing the strategy after Drummond made a dramatic jump to 60.5 percent.

Drummond finished 1-for-8 shooting from the line on Sunday, and Kokoskov’s strategy worked, with the Suns netting a plus-3 advantage in the span where Drummond was fouled three times, making 1 of 6 from the line.

“If we’re getting stops, OK we’ll go with it, but they were coming down and getting threes,” Pistons coach Dwane Casey said. “We were trading one for threes and that’s not a good deal.”

“I hate doing that because he has improved his free-throw shooting,” Casey said. “I don’t want to do anything psychologically to him, but again, they were coming down in that situation."

He said he used the strategy when he coached in Toronto against former Los Angeles Clippers center DeAndre Jordan, who has also improved enough in Dallas to where teams don't attempt it anymore.

Drummond entered Sunday shooting 54.7 percent on the season but dropped to 51.0 after the rough performance.

“I wasn’t mad at him, I was more frustrated at myself,” Drummond said about being taken out of the game. “Down the stretch of games, I need to be better at making those free throws, even if it’s just 1 of 2, it’s better than missing both.”

He also took time Monday after practice for some extra free throws.

“The best way to keep people from doing that is to knock down the free throws and making them,” Casey said. “And Andre will. I have no question in my mind. He’s going to make shots and he’s done it. He does it every day in practice and he does it in the game.” 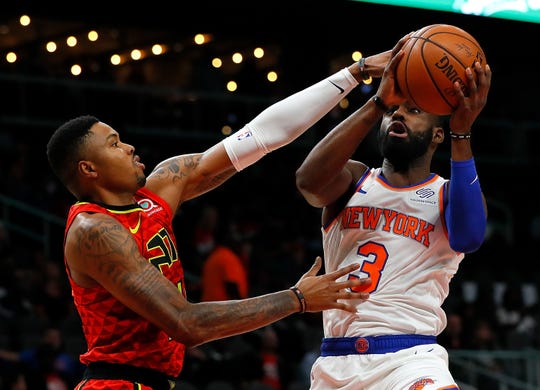 The two scoring leaders from the 2012-13 Wolverines, who reached the national championship game against Louisville, are slotted Nos. 1 and 3 on the scoring list this season for coach David Fizdale.

Hardaway is 15th in the league in scoring at 23.3 points per game, more than 11 points better than his career average before this season. Last season, Hardaway came back to the Knicks, the team that drafted him No. 24 in 2013, after two years in Atlanta.

Burke is on a scoring binge of his own, netting double figures in six of his last seven games. During the run, he’s scoring 19.3 points a game, which includes a season-high 31 points in a game against Orlando. He’s averaging 13.3 points in 18 games this season.

Burke, the ninth pick of the 2013 draft, landed with the Knicks last season, his third team. He also played 26 games with the Westchester Knicks of the G League.

The Knicks are on a three-game winning streak after losing their previous six, winning at Boston, at home against New Orleans and at Memphis.

Guard Luke Kennard continues to rehab his shoulder injury, and Casey said the second-year player is about a week away from a return.

Kennard suffered a sprained AC joint in his right shoulder after a hard pick from Cleveland’s Channing Frye on Oct. 25.

He has been participating in non-contact drills and post-practice shooting for over a week.

Kennard has missed 13 games with the injury and was averaging 5.7 points in 14.3 minutes over three games before he was hurt. He also did not see action in one game before the injury.

‘Hitman’ in the house

Maybe the most notable Pistons’ celebrity fan, boxer Thomas “Hitman” Hearns, was at practice Monday and spoke to the team. Hearns was at the game Sunday and is a longtime staple at The Palace of Auburn Hills and now Little Caesars Arena.

Hearns, 60, grew up in Detroit and trained at the former Kronk Gym under fabled trainer Emanuel Steward. Hearns, the Motor City Cobra, was the first fighter to win world titles in five weight divisions. His last fight was in 2006 at The Palace.

Langston Galloway finally shot straight at home on Sunday, with 4-of-6 shooting against Phoenix, all on 3-pointers.

The game was Galloway’s first game with better than 50-percent shooting at Little Caesars Arena this season. He’s had six straight road games of 50-percent-or-better shooting.

"It's about taking smart threes, and Langston has done that," Casey said. "He's playing with a high level of confidence in his shot, which you have to do."

The Pistons have a holiday ticket package through Dec. 24 with two tickets to any three regular-season games starting at $150 in the upper level and $300 in the lower level. The pack includes a signed Blake Griffin hat and three months of unlimited car washes from Jax Car Wash. The packages are available at pistons.com.

Outlook: The Knicks have been derailed by two long losing streaks – five and six games. They come to Detroit, however, riding a three-game win streak, including a 103-98 decision at Memphis on Sunday.