With a record of 5-8 in January and there are reasons for optimism, pessimism and indifference. For Pistons senior adviser Ed Stefanski, it’s not a reason to panic, but it’s a reminder to stay the course as the trade deadline approaches. 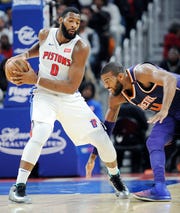 Andre Drummond could be ready to return to the lineup on Friday against the Mavericks. (Photo: Clarence Tabb Jr., Detroit News)

Dallas — With about two weeks remaining until the NBA trade deadline, the Pistons are in purgatory. At 21-26, they’re two games from the last playoff spot in the East, but with a favorable upcoming schedule and just a couple wins, they could find themselves in the thick of things again.

Juxtapose that with a record of 5-8 in January and there are reasons for optimism, pessimism and indifference. For Pistons senior adviser Ed Stefanski, it’s not a reason to panic, but it’s a reminder to stay the course as the trade deadline approaches.

Among the fan base and on social media, there is clamoring to deal almost anybody — including Blake Griffin — and completely remake the roster for the long haul. That doesn’t seem to be the direction the Pistons front office is likely to go.

“I wish I could tell the fans we’re going to change this immediately, but we have the cap situation that’s not in our favor right now. We’re going to keep looking at it,” Stefanski said on the Wired Pistons podcast with host Matt Dery. “(The front office goes) through the league constantly and talk to people, so we know where everybody stands. There are some deals that make sense and some deals that don’t make sense.”

The risk is that in a deal, the Pistons would have to give up future draft picks or young talent to offset some of the undesirable contracts on the roster. The Pistons have some young pieces, including Luke Kennard, Bruce Brown and Khyri Thomas, who they’d like to develop, but that might be what other teams would want back.

“I will tell the fans I’m not going to make a deal that could hurt us going forward that could be instant relief but could be only for this season and then we could have issues going forward,” Stefanski said. “That makes no sense to me. The word people don’t want to hear is patience. Where we have (cap) restrictions, there’s nothing else but to be patient.”

What potentially could be a middle ground is including their 2019 first-round pick in a trade, but even that is wrought with uncertainty. Currently, that pick would be around No. 9 or No. 10, with the potential to move up in the draft lottery.

Stefanski is more apt to hold on to the selection and try to build over the long term to add rookies with controllable contracts. With the teams he’s been with in the past, Stefanski has been on both sides of trading and staying pat.

“I would never say never to (trading the pick). People look at the record of places I’ve been and I have no problem raising my hand and being the first to say let’s move anything to try to get better that makes sense,” he said. “The first-round pick makes sense for us to help us build this team back to where we want it to be. If there was a trade that really could help us and made sense, I’m the first one to use every asset we have available.”

Stefanski told Dery he’s been in regular communication with team owner Tom Gores about potential trade offers and the status of the team, but the approach seems to be to wait until closer to the Feb. 7 trade deadline and assess the situation more closely then.

He reiterated the notion that the Pistons will not be in tanking mode, trying to lose the rest of their games to garner a better draft pick.

“We still would like to make the playoffs. That’s something we should try to do. It’s a positive situation — that’s why you play the games,” Stefanski said. “I’m not a big fan of just trying to totally rip it down and start all over again. You have to get lucky and that could go the wrong way.

“That could be years of heartache and I don’t think we need to be there. We’ll see where we are at the trade deadline and make recommendations to Tom and the Platinum group.”

Andre Drummond, who missed the last three starts while he was in the NBA concussion protocol, has cleared his tests and could be ready to return to the lineup on Friday against the Mavericks.

Coach Dwane Casey said that Drummond wasn't feeling well before Wednesday's win over the Pelicans and sat out.

Outlook: The Pistons (21-26) split the first two games of their three-game trip and get their first look at rookie sensation Luka Doncic, who is posting 21.3 points, 7.6 rebounds and 6.2 assists in his last 10 games for the Mavericks (21-26).