Wizards guard Bradley Beal took what appeared to be five steps on a play and wasn't call for traveling or any other violation. 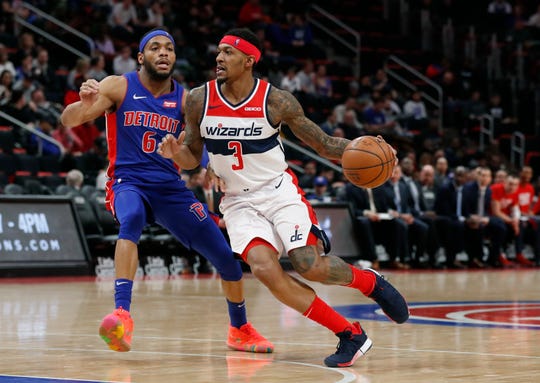 Wizards guard Bradley Beal was involved in a controversial no-call in Monday's loss to the Pistons. (Photo: Carlos Osorio, AP)

Auburn Hills — It used to be easy to figure out what a travel call in the NBA was — two steps after dribbling or catching the ball.

That simple definition got a shakeup on Tuesday, in the aftermath of a head-scratching no-call in Monday night’s Pistons win over the Washington Wizards.

Wizards guard Bradley Beal was driving to the basket and took two steps, only to find Pistons big man Blake Griffin in the lane, ready to block his shot. Beal took an additional three steps and went under the rim, jumping to pass the ball.

The Pistons coaches and players were incredulous — as were most of the fans in attendance at Little Caesars Arena — who wondered why traveling wasn’t called immediately. Video of the play went viral, with most wholeheartedly believing the officials had missed a call.

The NBA Officials account on Twitter responded Tuesday, clarifying the interpretation of the play and applying the “gather” rule, claiming that Beal lost control of the ball on the drive and re-established a new pivot foot.

The offensive player gathers with his right foot on the ground. He then takes two legal steps, before losing control of the ball. After regaining possession, a player is allowed to regain his pivot foot and pass or shoot prior to that foot returning to the ground. This is legal. https://t.co/0hVqgHw3w7

“The offensive player gathers with his right foot on the ground. He then takes two legal steps, before losing control of the ball,” the post wrote. “After regaining possession, a player is allowed to regain his pivot foot and pass or shoot prior to that foot returning to the ground. This is legal.”

Griffin reacted after Tuesday’s Pistons practice, with a skeptical take on the referees’ interpretation.

“They have to suspend that account or something,” Griffin joked. “If that’s what that account is for, come on … no.”

Beal added his bias view of the play on Twitter later Monday night: “Look clean to me.”

It’s the second time the Pistons have been burned by an officials’ ruling of a player gathering the ball and not traveling or committing a double-dribble.

On Jan. 19, the Pistons were leading in the final seconds against the Sacramento Kings and Buddy Hield lost the ball and dribbled again before making a desperation 3-pointer, lifting the Kings to an unbelievable win.

Hield looked to double-dribble but the officials ruled — and later confirmed the following day that the correct call was made and that he gathered the ball and could reestablish his dribble.

“(Beal’s) was way worse. You could make a case for Buddy actually fumbling the ball,” Griffin said Tuesday. “(Beal) didn’t fumble the ball — he was about to go dribble it and thought, ‘Oh, (expletive), I’ve already picked up my dribble and I can’t do that again.'”

Casey had high praise for Thon Maker, who was playing in his second game with the Pistons, but made an impression with his hustle, especially on making a highlight-reel block on Bobby Portis.

He grew his following when he took an offensive foul and has a busted lip that needed five stitches. Maker's energy didn't go unnoticed by Casey.

"It’s contagious. He made one play last night where he blocked a shot, got knocked on the floor — and probably got his tooth halfway knocked out — got back up again and deterred another shot. Those are winning plays, energy plays, and it’s contagious," Casey said. "That (reserve) group had an energy level that had a bounce in it once he was in the game. I really love the young man, the way he approaches with his pure heart and plays with a purpose and an energy.

"He was wide-open and somebody made a shot and he was just as excited for the guy making the shot than angry at him missing the pass. That type of pulling for your teammate – that’s what we have to be about to be a good team in this league."

Outlook: The Celtics (35-21) have lost two straight but the surging Pistons (26-29) have won four straight and moved back into playoff position. The Celtics lead the season series, 2-1.