Pistons say they'll be 'locked in' against lesser opponents

As the Detroit Pistons gird themselves for a playoff push in the final 26 games of the regular season, there’s a tendency to look at the schedule and try to find games they're most likely to win.

Pistons say they'll be 'locked in' against lesser opponents

Blake Griffin is looking to help keep the Pistons on the path to the playoffs in the last 26 games. The Detroit News 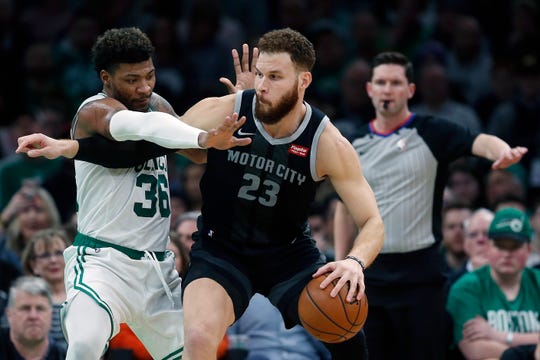 Auburn Hills — As the Pistons prepare for a playoff push in the final 26 games of the regular season, there’s a tendency to look at the schedule and try to find winnable games.

They still have several games against teams with losing records, such as the Hawks, Cavaliers and Bulls, but they’re careful not to look past anybody.

Friday night's matchup at the Atlanta Hawks is the first of a back-to-back, with the Heat — who are tied with the Pistons for the final playoff spot in the East — looming on Saturday. The Hawks are 20 games below .500 and are destined for the draft lottery, but the Pistons know all too well that they aren’t to be ignored.

“Atlanta has been a team that has struggled early on but since then, they’ve had some big wins and some guys playing really well,” forward Blake Griffin said. “Trae (Young) has played much better and played like he’s capable of, this past month especially.

“We have to make sure we don’t overlook them; I don’t think that’ll be the case in this situation.”

The Pistons have the fresh memory of the Hawks victory at Little Caesars Arena just before Christmas. It’s a reminder that they can lose to any team at any time — and focus becomes critical in the final stretch of games.

“Trae Young is a handful; he’s torching everybody,” Casey said. “It starts with him attacking the paint, finding people, finding shooters and making sure they do some different things with their (big men) in the pick-and-roll to try to confuse you.

“We have to make sure we have an understanding of how we want to cover that. He is such a great passer and shooter with his speed that causes problems for everybody.”

Those games against those struggling teams can lift the Pistons in the final stretch, if they’re able to stay focused and not be the upset victims, as they have been so many times this season. Of their final 26 games, 14 opponents currently have losing records, with six games against some of the teams with the worst records: New York, Chicago (twice), Cleveland (twice) and Phoenix.

“We can’t look at anybody — under .500 or over .500 — we have to treat everybody the same because we’re not in a position to do that. We’ve kicked away so many close games and we’ve put ourselves in this position so now we have to take care of business, no matter what the team’s record is,” Casey said. “A lot of those teams are playing for pride and the better teams are playing for home-court advantage. We’re desperate to get into the playoff, so that should be our goal.”

Guard Wayne Ellington has seen the importance of winning against the struggling teams and not taking anything for granted. The Pistons are in a playoff push and he’s going to be a veteran who reminds everyone of the need to focus and not look past anyone.

“Those are the dangerous games — (teams like) Atlanta, Cleveland and Chicago,” Ellington said. “Those guys are coming in and playing hard every night. We have to make sure we’re locked in for those games and treat them as if we’re playing Miami or a playoff team.

“Those are the games we have to lock in even more and make sure we have attention to detail.”

Ellington in the mix

Wayne Ellington, who played 2 1/2 seasons with the Heat before being traded to the Phoenix Suns and waived before the trade deadline, said playing his former team won’t be weird. He still has friends on the Heat but he’s more about winning now, with his current and former teams jockeying for playoff position.

“I know those guys. For me, I’m going to go in there and play my hardest," he said. "I don’t want to get too hyped up; it is against a former team and guys I’m pretty close with. At the same time, it’s a game and you go in there to win that game and get the (win) however you can.

“I’m a Piston; I’m going against those guys on Saturday. We’ll be familiar with what they’re running.”