After Blake Griffin ejection and trash talk, Pistons get the last word

Blake Griffin was ejected in the third quarter, but Pistons pulled it together to get a big win in Atlanta.

After Blake Griffin ejection and trash talk, Pistons get the last word

Griffin had 15 points but was ejected for taunting Hawks players in the third quarter. The Detroit News 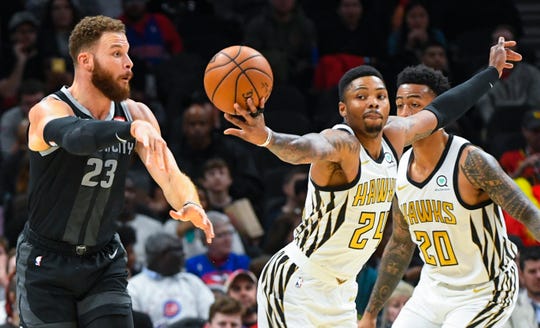 The Pistons overcame having their All-Star forward ejected in the third quarter, after he received two technical fouls within a minute of game time. They regrouped and prevailed, taking a 125-123 victory over the Atlanta Hawks on Friday night.

Griffin got the first technical after a fracas with Hawks big man Dewayne Dedmon, who looked to be holding onto the ball. He got the second technical after making a 3-pointer and saying something toward the Hawks bench with 4:19 left in the third quarter.

Griffin finished with 15 and four rebounds in just 23 minutes and the Pistons had their biggest lead, 88-77.

“Not really a whole lot to say about that — the tape pretty much speaks for itself,” Griffin said. “I shouldn’t have been back here (in the locker room).

“I’ve had a lot of techs that I deserved. Those two tonight. … I don’t know about those. None (no explanation).”

Coach Dwane Casey said the technicals were unprecedented for him because they came so close together and for seemingly minor comments.

“It’s tough when you have your best player taken out of the game by two questionable technicals,” Casey said. “I have never seen that in my coaching career: A young man going to pick a ball up, he is excited about making a shot and he gets a technical — two for that matter — then he is thrown out of the game.”

Asked what triggered the call for Griffin’s second technical foul, Josh Piven, the crew chief, told the pool reporter: “After his 3-point basket, Blake yells in a taunting manner at the Atlanta bench, using vulgarity. This was seen and heard by the official, and Blake received a taunting technical foul, which was his second of the game. Therefore, he was ejected.”

Reggie Jackson was savage for this. Threw the game ball to Quavo after time expired 😂 @detnewsRodBeard@Keith_Langloispic.twitter.com/w2fHJ2aYnm

Without Griffin, the Pistons played one of their most spirited games of the season, with plenty of trash talk between both teams. The Hawks looked to benefit from the chippiness, which got their crowd involved, but the Pistons were able to regroup without their best player.

The trash talk had been building all game, with Quavo, a member of the rap group Migos, apparently starting some of the intensity, stoking a back-and-forth between Pistons rookie Bruce Brown and Hawks rookie Trae Young.

“Quavo started talking and saying I couldn’t hold Trae. I just did what I needed to do. It was fun,” Brown said. “That’s what really got me going. I love when people talk smack because it gets my motor going and obviously I don’t want anybody scoring on me when they’re talking (trash).”

Reggie Jackson added: "Quavo did a great job motivating us tonight, so the Hawks can thank him."

After the Hawks won in Detroit in December, Friday’s was a game the Pistons needed to stay in the playoff race. They found a different gear when the intensity ramped up and Jackson had his best game of the season, with 32 points.

“They have been playing well of late, so we were very fortunate to come in here and get a win.”