It's not just Blake Griffin, and that's why Detroit is on a roll these days.

Blake Griffin had a triple-double as the Pistons beat the Pacers on Monday night. The Detroit News 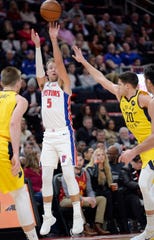 Detroit — During the dog days of December and January, it was becoming a necessary monotony: Blake Griffin getting the ball on the wing and everyone clearing out of the paint, creating an isolation situation.

Relying on Griffin’s mismatches became a mainstay of the Pistons’ offense and they were beholden to it while the rest of their offense struggled, and they needed to find scoring from somewhere — anywhere.

It was a tactic that helped Griffin get his sixth All-Star selection but didn’t do much for the Pistons’ record, as they were below .500 before the All-Star break. In the past couple weeks, though, the Pistons have bounced back, spreading the offense around to several other players — while also giving Griffin a break by not utilizing him as heavily.

“Out of desperation, a lot of that iso was scoring points. If we had other players clicking at the time, we would have been pretty good,” coach Dwane Casey said before Monday night's 113-109 victory over the Pacers at LCA. “Then we got the two-man game with (Reggie) Bullock and that started developing and then all at once, Reggie (Jackson) started coming around and Andre (Drummond) and then Luke (Kennard) coming around now and Langston (Galloway) the other night.”

Reggie Jackson’s surge in the past 11 games has been a critical element as well. Jackson has played the pick-and-roll almost to perfection and is hitting near 50 percent on 3-pointers. With that added variety on offense, the Pistons have been able to spread the scoring wealth around including to the bench.

The Pistons won their third straight game and seventh in the last eight, topping the Indiana Pacers, 113-109, on Monday night at LCA in Detroit. The Detroit News

“Jackson is playing at a higher level; if he was playing as efficiently as this earlier, we wouldn’t have had as many plays to call because he’s playing excellent basketball right now,” Casey said. “I understand we can’t win just one-on-one with Blake. Other players have to step up and there are a lot of opportunities to do it. In the last two weeks, we’re No. 1 in offense. It’s a team game but at the end of the day, you have to do what you have to do to try to win the games.”

In the past 11 games, the Pistons are 8-3 and have vaulted into seventh position in the Eastern Conference playoff race. While they had been struggling for the middle part of the schedule, they’ve feasted on the teams at the bottom of the standings and have renewed their postseason hopes.

Griffin, who had a triple-double Monday, took them most of the way and now that others are playing bigger roles and increasing their production, they’re becoming a team to watch as the playoff race heats up.

And it’s not just riding Griffin — others have to do their parts and not just watch. Like Kennard, who had a big game Monday.

“You can’t win that way; if you have a shot, you have to take it and play with confidence,” Casey said. “Reggie and Andre are playing very efficiently and making plays at the rim or kicking it out. It helps to bring Wayne in who understands flow mentality but there’s freedom and structure.”

The Pistons got a triple-double from Blake Griffin and 26 points and 16 rebounds from Andre Drummoond to beat the Pacers on Monday night. The Detroit News

Casey also credited the defense for the recent surge. Though the offense has been terrific, getting stops is another big part of what’s turning things around.

“The number one thing is our defensive intensity, our focus defensively and doing the little things defensively — whether it’s making sure we are in the right spot at the right time, showing our length, all the defensive fundamentals we’ve done a better job at,” Casey said. “We cut down on the second shots and the guards are coming back in and helping rebound, and not just assuming Andre is going to get all the rebounds. It’s a multitude of things.”