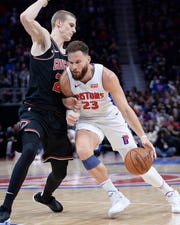 For most of the season, it looked like Blake Griffin was going to defy the odds and naysayers.

Most said Griffin was injury-prone.

Many postulated Griffin’s best years are behind him.

The talk was that the Pistons got damaged goods in the trade with the Clippers.

Throughout the season, Griffin had only missed three games — all Pistons losses — but had avoided missing any games because of injury. That ended Saturday when Griffin was a late scratch because of left knee soreness.

It’s becoming a greater concern, as Griffin was listed as out on the injury report for Monday’s matchup against the Indiana Pacers. It could be a precaution to ensure Griffin remains healthy for the remaining five games of the season and into the playoffs. It could be something more serious.

“He’s day-to-day. He tried to go in warmups and his knee was just sore. Instead of risking it, he pulled himself out,” coach Dwane Casey said in the aftermath of Saturday’s 99-90 win over the Portland Trail Blazers. “It was an emotional jolt for us because he was there warming up and all of a sudden, he wasn’t there.

“We’ll be better from that and better the next time out. It surprised all of us and we knew his knee was a little sore, but we thought he still was going to go. He tried it.”

Casey said he didn’t know the cause of the injury or when it occurred.

That Griffin participated in pregame warmups indicates that it wasn’t too serious, but the fact that he wasn’t feeling good enough after pregame — he was listed on the official starting lineup right up until tip time — indicates some level of surprise.

For Monday’s game, the Pistons know they’ll be without Griffin and can adjust their game plan accordingly.

“It’s tough to lose our All-Star, superstar player,” said Reggie Jackson, who had 28 points in the win. “I commend everybody for coming out and competing hard, especially the way we started and finding a way to tough out this win.”

The Pistons managed just 11 points in the first quarter and just 31 in the first half against the Trail Blazers. The offense looked disjointed without Griffin, the main cog, and Thon Maker likely will get another start.

It’s more than just the scoring; it’s the idea that Griffin generally is the best player on the court — or close to it — when he plays. The Pistons have to play a different style when Griffin’s not there, and they may have to resort to it more if the injury is any more serious and keeping him out Monday is any more than a precaution.

“Not having Blake tonight, definitely he was missed, especially early on in that first half when we couldn’t get it going,” Drummond said Saturday. “In the second half, we made it work.”

The Pistons are a few wins away from clinching a playoff spot for the second time in 11 years. They’ll be careful with Griffin, who has played in 72 games — more than any season since he played 80 in 2013-14. The rest of the week includes a rematch with the Pacers at Little Caesars Arena on Wednesday and a road game at Oklahoma City on Friday.

Outlook: The Pistons (39-37) have won two straight games and control their own destiny for making the playoffs and tpotential seeding. The Pacers (45-32) have lost seven of their last eight games and have tumbled to fifth in the East.