Rod Beard zeros in on key areas as the Pistons open their NBA playoff series against the Milwaukee Bucks. 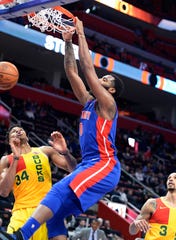 Without Blake Griffin, the Pistons have an uphill climb against the top-seeded Bucks. The Detroit News

Milwaukee — The Pistons open their series against the top-seeded Milwaukee Bucks as heavy underdogs on Sunday night at Fiserv Forum. After losing all four regular-season meetings, the Pistons will have to find a way to win four games in a best-of-seven series to keep their season alive.

For a franchise that hasn’t won a playoff game since 2008, just getting a win or two could be considered the cherry on top of a successful season. The Bucks (60-22) had the best record in the NBA this season and have the MVP favorite, Giannis Antetokounmpo, while the Pistons’ best player, Blake Griffin, is listed as questionable because of an injured left knee.

Here are five things to watch as the series begins:

Griffin is the best physical combination of size and strength, but if he’s not close to 100 percent, it’s an even tougher assignment. Thon Maker has some experience in defending Antetokounmpo in practices when Maker was with the Bucks. It’s not a one-man job; rather, it will require the Pistons to communicate clearly and effectively and close the perimeter gaps quickly so that he can’t get in the lane. Not many teams can guard him one-on-one but without Griffin, it’s a tough task.

“As you see throughout the league, it’s not a one-man effort. You have to have the whole team locked in,” Maker said. “He commands a lot and when he sees a double-team, he picks that apart.”

If the Pistons can’t be effective in man-to-man defense against the Bucks, they could opt to try a zone approach. They haven’t done it much this season, but the playoffs are a good time to insert new wrinkles. It wouldn’t be an extended strategy, but for a modest number of possessions, it could be effective.

The Pistons have shot 35.8 percent — just above their season average — in the four games against the Bucks but they’ll probably have to do even better if they’re going to be competitive in this series. They’ll need Wayne Ellington, who was acquired after the four regular-season meetings, to add some needed punch in the starting lineup and the combo of Luke Kennard, Langston Galloway and Ish Smith to provide some help off the bench.

Whether Griffin plays is the biggest story for the Pistons, but the second could be the play of Andre Drummond. He averaged a career-best 17.3 points and improved his offensive efficiency, but he’ll need to be even better in the playoffs. Defensively, he’ll have to protect the rim even better but also float out to the perimeter to guard Brook Lopez, who has become a threat from 3-point range. Staying out of foul trouble will be critical for the Pistons’ success, because of the dropoff in defensive production to Zaza Pachulia. Look for Jon Leuer and Glenn Robinson III to get more run in this series.

The Pistons will look to mix their driving to the rim and 3-point shooting. Against the Bucks, they averaged only 12.5 made free throws and 16.8 attempts — both the lowest totals against any Eastern Conference opponent, which they played either three or four times. They’ll need to slow the pace and get some easy points from the line, especially if the 3-pointers aren’t falling. By the same token, they’ll have to prevent fouling the Bucks and giving them easy opportunities.