'We didn't get anything done': Bucks run over Pistons in Game 1

The top-seeded Milwaukee Bucks toyed with the Pistons in the first half and made it a laugher in the third quarter in Sunday's 121-86 loss.

'We didn't get anything done': Bucks run over Pistons in Game 1

Griffin missed the playoff opener because of left knee soreness and the Pistons suffered a 35-point loss. The Detroit News

Milwaukee — It got to be bad — really bad — in the third quarter. It was to the point where the only thing in question was the final scoring margin.

Even that was going to be an eye-popping number.

The top-seeded Milwaukee Bucks toyed with the Pistons in the first half and made it a laugher in the third quarter. From there, it only got worse.

The Bucks had their way from the start and took a convincing 121-86 victory in Game 1 of their Eastern Conference playoff series on Sunday night at Fiserv Forum.

The loss extends the Pistons’ playoff losing streak to 11, as they were swept in their previous two appearances and lost the final two games in the 2007-08 series against the Celtics in the conference finals, a series the Pistons lost, 4-2.

The Pistons were without leading scorer Blake Griffin, who has missed five of the last eight games because of a sore knee. Coach Dwane Casey announced before the game that Griffin was still too sore to play but indicated that Griffin’s status still is day-to-day.

From the looks of the opener, it could be a quick series without Griffin — and could be a short one even if he does play.

“They’re a great team; we didn’t meet the level of physicality,” Casey said. “We were all over the map defensively. We didn’t get anything done. We have another level we have to get to with our intensity and physicality, because they’re coming through with balance.

“We have to get our level of competitiveness up to start the game, because you can’t let a great team like this get that many points early and expect to get back into it.”

Drummond had 12 points and 12 rebounds before being ejected in the third quarter because of a flagrant-2 foul. The Detroit News

With Griffin out of the lineup, Giannis Antetokounmpo went to work early, drawing two early fouls on Thon Maker — who started for Griffin — in the first 74 seconds. After that, Casey moved Andre Drummond to guard Antetokounmpo, which worked a bit better, but the damage already was done.

The Bucks bolted out to a 20-4 lead in the opening five minutes, with Antetokounmpo scoring 10 points in that span. The Pistons didn’t get anything going offensively, with just two baskets by Drummond, who finished with 12 points and 12 rebounds in 26 minutes, before he was ejected at the 4:07 mark of the third quarter for a flagrant-2 foul on Antetokounmpo.

“We have to come out with more energy from the beginning and can’t allow them to get a break going,” Drummond said. “Transition defense is huge for us. We allowed them to get going and we couldn’t sustain it from there.”

Even after Antetokounmpo went to the bench late in the first quarter, the Bucks continued the onslaught with a 3-pointer and a dunk by Brook Lopez (14 points) and a 3-pointer by Pat Connaughton (10 points and eight rebounds) for a 38-18 lead after the first period.

Luke Kennard (21 points) got going at the end of the first quarter and continued into the second with a 3-pointer, scoring 11 of the team's first 16 points of the second to get the Pistons within 49-33 at the 5:45 mark.

“We had a tough time scoring the ball. Shots that we normally make weren’t falling,” Kennard said. “(Casey) just told us to play basketball, play free and let our shots go.”

The Bucks put it out of reach from there, with two free throws each from Lopez and George Hill. Hill added another hook to get the lead back to 22 and the Pistons didn’t get much closer the rest of the way. 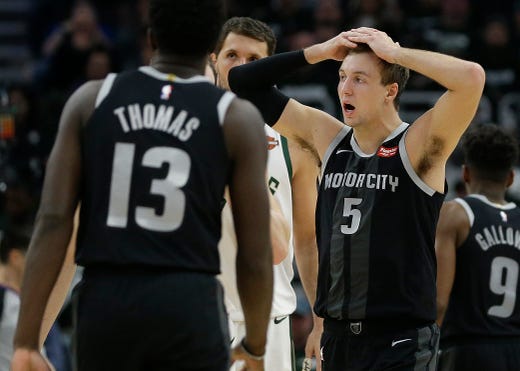 Detroit Pistons' Luke Kennard (5) reacts during the second half of Game 1 of the first-round playoff series against the Milwaukee Bucks on Sunday in Milwaukee. The Bucks won, 121-86. Aaron Gash, AP
Fullscreen 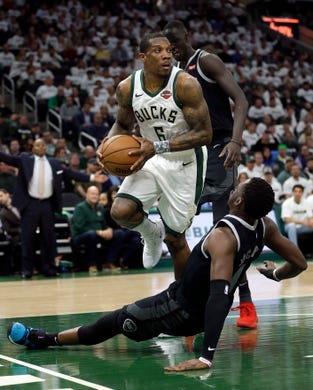 Pistons' Reggie Jackson falls to the floor while defending Bucks' Eric Bledsoe during the second half. Aaron Gash, AP
Fullscreen 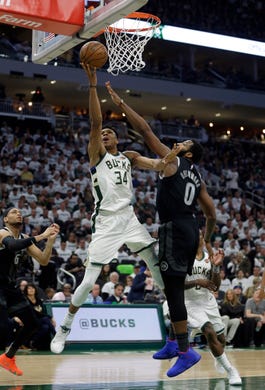 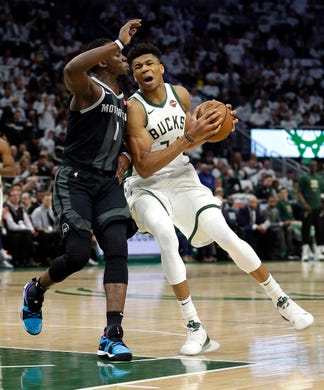 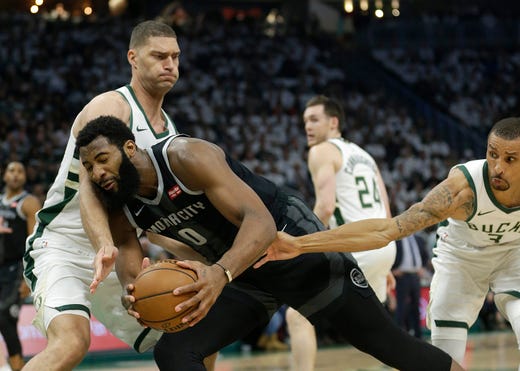 Pistons' Andre Drummond (0) is fouled as he drives between Bucks' Brook Lopez and George Hill during the first half. Aaron Gash, AP
Fullscreen 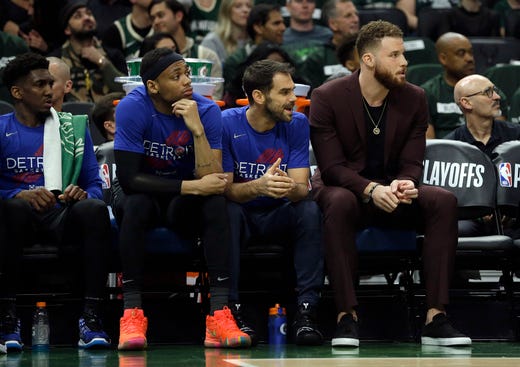 Pistons' Blake Griffin, right, watches from the bench during the first half. Aaron Gash, AP
Fullscreen 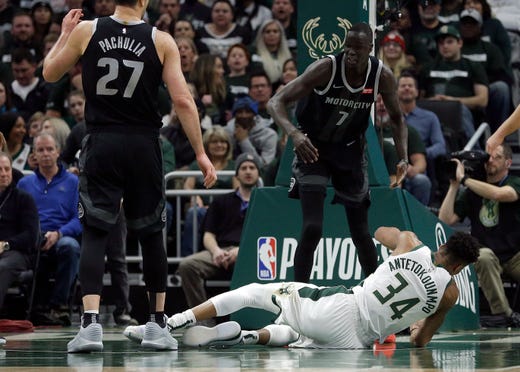 Bucks' Giannis Antetokounmpo (34) falls to the floor after being fouled by Pistons' Thon Maker (7) during the first half. Aaron Gash, AP
Fullscreen 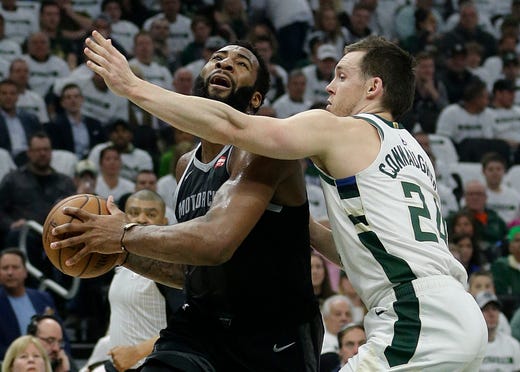 Pistons' Andre Drummond, left, drives to the basket against Bucks' Pat Connaughton during the first half. Aaron Gash, AP
Fullscreen 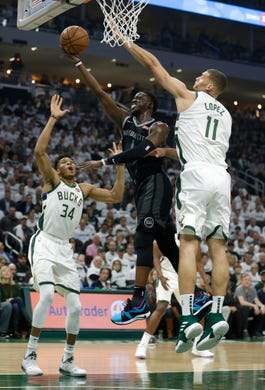 Pistons coach Dwane Casey reacts to a call during the first half. Aaron Gash, AP
Fullscreen 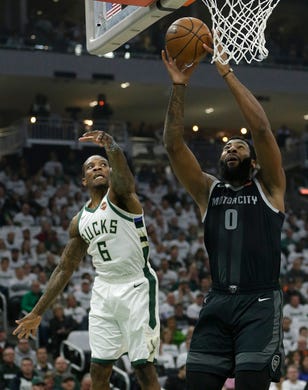 Pistons' Andre Drummond (0) is fouled by Bucks' Eric Bledsoe on a shot attempt during the first half. Aaron Gash, AP
Fullscreen 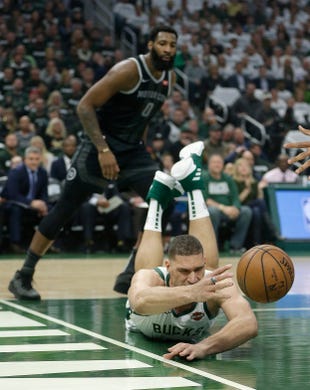 Bucks' Brook Lopez is unable to save the ball from going out of bounds in front of Pistons' Andre Drummond during the first half. Aaron Gash, AP
Fullscreen 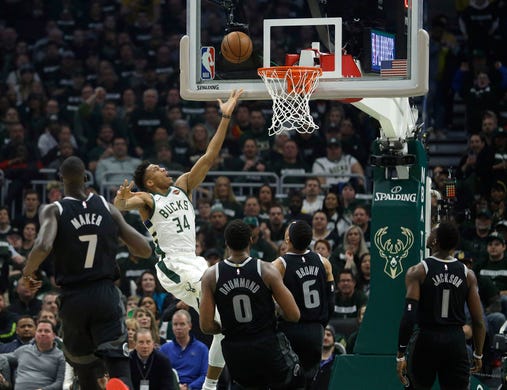 ►Drummond appeared to be more effective when he switched to defending Antetokounmpo. He’s big enough and quick enough on his feet to stay with him and to keep his position. Although Antetokounmpo already had gotten going, he settled for a couple of jumpers and wasn’t attacking the paint like he did when Maker was on him. It could be a ploy that the Pistons get back to in the remainder of the series.

►Kennard was effective in trying to find his shot and finished 4-for-5 on 3-pointers. That seemed to be the best opportunity that the Pistons have in the series — hitting from 3-point range and hoping their defense was good enough. It wasn’t in Game 1 and that’s where some of the adjustments are going to have to come in the next couple of games.

►Khyri Thomas did well in his time, going 4-for-6 from the field and finished with nine points in nine minutes. The rookie didn’t look to be daunted by the moment or the stage — despite the lopsided scoring margin — and got some valuable experience.

►Antetokounmpo was a handful to try to guard. The Pistons don’t have a good candidate to try to guard him and they resorted to some zone-defense looks and moved to using Drummond to guard him. Still, he showed why he likely will be the MVP.

Taking off from just inside the foul line 👀#FearTheDeer#NBAPlayoffs