Follow along here for live updates from Matt Schoch as the Pistons take on the Bucks in Game 2 of their NBA playoff series. 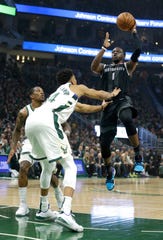 If it wasn't apparent the Pistons were going to have their work cut out for them against the top-seeded Milwaukee Bucks, it is now.

The Pistons enter Game 2 of their best-of-seven NBA playoff series on Wednesday looking to bounce back from a 35-point Game 1 thumping in Milwaukee.

Forward Blake Griffin is out with a knee injury, which only makes the task more daunting.

The Pistons are in the playoffs for the second time in 10 seasons, and are seeking their first playoff victory since 2008. They've been swept out in the first round in their last two playoff appearances (to the Cavaliers in 2009 and 2016).

Pistons down 2-0 after Bucks surge to win

The Pistons fought hard for a half, but succombed to the Bucks in Game 2 in Milwaukee 113-97.

Eric Bledsoe had 27 points to lead the way, and Giannis Antetokounmpo had 26 points and 12 rebounds for Milwaukee.

Luke Kennard was the Pistons leading scorer for the second straight night with 19 points.

Game 3 in Saturday night in Detroit.

If nothing else, Pistons know exactly what their needs are headed into the offseason, starting with a wing who can get his own shot. Would work wonders, no?

Giannis Antetokounmpo had an acrobatic and-1 after a fantastic Eric Bledsoe steal.

The point spread was 15 points, by the way.

The Pistons really need to draft a guy like Khris Middleton.

What’s that about tanking?

Bledsoe, Bucks back in command

Eric Bledsoe has led the Bucks back in command after the Pistons got the lead down to single digits for a bit.

This is where #Pistons miss Blake Griffin -- they need a basket and a go-to-guy who can go get one.

Shot selection has doomed the Pistons and players like Sterling Brown and Pat Connaughton have taken control for the Bucks heading to the fourth.

The Pistons were outscored 35-17 in the third quarter.

My wife walks in and sees the score...

Blake with his second tech in street clothes. That makes his plus-minus something like -∞

Griffin gets second tech this series

Blake Griffin was given a technical foul for the second straight game, despite being in a suit.

Blake Griffin gets a technical foul (again) from the bench. He was also issued a tech in Game 1.

I’m very much interstates in upgrading over Wayne Ellington if I’m the Pistons. He’s fine, but streaky as a shooter and isn’t any sort of secondary/tertiary creator.

Giannis pouring it on, Bucks lead

Giannis Antetokounmpo already has nine points in the third quarter. He has 19 in the game.

The Bucks went on a 16-4 run in the third and are back in command.

Drummond just keeps ceding ground on Antetokounmpo. Definitely not the way to guard him. Gives him a runway to the rim. Have to meet him when he makes his move.

#Pistons can win if they whether the storm of the first 3-5 minutes of the 2nd half.

Giannis surges for Bucks in third

The Bucks are on a 9-2 run and have re-taken the lead.

Good Tweeters out there on the social medias

There have been some very good tweets from excited Pistons nation.

Check out another sampling below.

All Dwane Casey slander is paused. The Pistons have made good adjustments. I mentioned it in my preview, but this is one of the biggest things to watch. Once again, failure t do this is why he got fired. If he's learned from past mistakes it would be HUGE

Milo has crossed his paws for the #Pistonspic.twitter.com/bxtHSyu1Pb

The Pistons hung around in the first half, and then took the lead.

Reggie Jackson has 14 points including a layup with 3.8 seconds left in the half to take the lead.

Bruce Brown is playing the defense of his life. Goodness gracious. This cat is REAL tonight.

Giannis Antetokounmpo drew his third foul, and coach Mike Budenholzer elects to stay with him. Something to keep an eye on.

Bruce Brown is providing a spark for the Pistons off the bench, drawing a charge on Giannis and getting a steal and score.

Pistons back in it early second

Thon Maker is showing energy and playing a little better in this one.

Wayne Ellington made a 3-pointer. He needs to get going after shooting 2-for-10 on Sunday.

Langston Galloway knocked down a 3-pointer, but the rest of the Pistons bench is firing blanks.

Then, Glenn Robinson III knocked a triple down after missing his first two. He's showing signs of life in this one.

Eric Bledsoe has 12 points, and Khris Middleton has nine points for the Bucks. Reggie Jackson has eight points.

Also, notice that without Bruce Brown, love him or think he sucks, the Pistons giving up a BUNCH of points #CongaLine

I feel bad for Pistons fans. The ONE reason they had to look forward to the playoffs (Blake Griffin) was snatched away and now this series is gonna be a sweep that's ugly every single game

GRIII getting early run for Pistons

Glenn Robinson III entered the game for Thon before the midway point of the first quarter.

Aaron Rodgers is in the house for the game.

Biggest roar of the night: Aaron Rodgers shown on the video screen ... right after teammate David Bakhtiari was introduced, stood up, chugged his beer and crushed the can

Better start for Pistons in Game 2

Luke Kennard got the Pistons started with a 3-pointer, giving the Pistons the early lead.

The Bucks are going after Thon Maker on Brook Lopez, which is a mismatch inside.

Charles Barkley breaks the fourth wall yet again by saying NBA TV is “where we put the games we don’t care about” https://t.co/3HtLDOT3W2pic.twitter.com/7cEXPK7Z5n

The Pistons wearing the black alternates is a bigger issue than not having Blake Griffin.

With Blake Griffin out once again, Thon Maker will be getting the start in Game 2 for the Pistons, presumably with some responsibilities of stopping Giannis Antetokounmpo.

The news today is that Luke Kennard is starting in the backcourt for the Pistons after dropping 21 points on Sunday. He's replacing Bruce Brown in the starting lineup.