In Sunday’s playoff series opener, Maker’s first game back in Milwaukee, he seemed to be expecting at least a lukewarm reception from his once-adoring fans. Not so much. 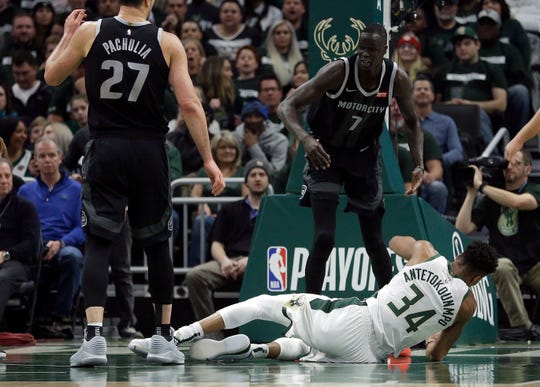 Milwaukee — In his first two-plus seasons with the Milwaukee Bucks, Thon Maker had developed into something of a fan favorite. He hustled almost unceasingly and with his lanky, 7-foot-1 frame, he could appear out of nowhere and swat a shot out of the sky. He could play weak-side defense with the best of them and looked to be a good building block for the Bucks’ future.

When his playing time dwindled midway through the season, Maker wanted a change of scenery and was subsequently dealt to the Pistons at the trade deadline. A new team brought a new opportunity to prove himself and a chance to create a whole new base of fans in Detroit.

In Sunday’s playoff series opener, Maker’s first game back in Milwaukee, he seemed to be expecting at least a lukewarm reception from his once-adoring fans.

Maker received some boos when he was introduced in the starting lineup — and that got louder as the game progressed. When he picked up two fouls in the first two minutes, the Bucks fans’ ire was palpable.

And it caught Maker a little off-guard.

You can always go home. Sometimes.

The playoffs are not that time, apparently. When Maker had a hard foul on Giannis Antetokounmpo, the crowd erupted in derisive boos, which caught Maker off guard, to the point that it stuck with him even beyond the final buzzer.

It was more than the hostile reception; it was the way that he played against Antetokounmpo and how the playoff experience that he got with the Bucks didn’t translate in his postseason debut with the Pistons.

He expected more of himself and when he didn't deliver, it was a disappointment.

“It did take a while to sleep but that’s normal with the playoffs and the intensity of the game,” Maker said. “You process the game over and over again. I have to come out better and ready to go on the defensive end, move your feet, stop reaching, be disciplined on the offensive end and make (Antetokounmpo) play defense. Giannis uses a lot of energy on the offensive end compared to defensive.

“I have to come out better, for sure.”

It's not just Maker; the Pistons only managed 18 points in the first quarter and trailed by 20, en route to the rout.

Maker finished with just four points and four rebounds and his defense on Antetokounmpo was less-than-stellar. With Blake Griffin still on the mend, the Pistons had to resort to their Plan B, which gave the bulkier Antetokounmpo an advantage.

Coach Dwane Casey accentuated the need to keep Antetokounmpo out of the driving lanes and to have a more team-oriented defensive approach in keeping him in check. It didn’t work well in the first few minutes.

Maker has seen Antetokounmpo at his best and knows where not to let him get.