James Harden put on an MVP performance with 32 points, 13 rebounds and 10 assists to lead the Houston Rockets to a second straight rout of the Utah Jazz. 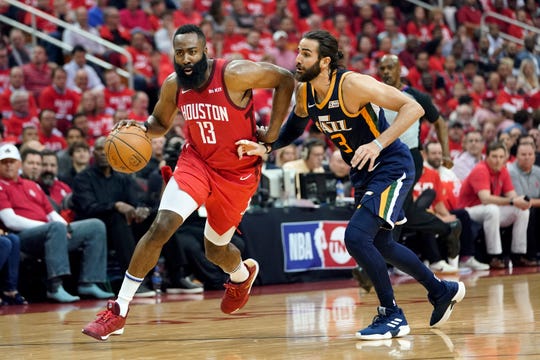 Houston — James Harden put on an MVP performance with 32 points, 13 rebounds and 10 assists to lead the Houston Rockets to a second straight rout of the Utah Jazz, 118-98, on Wednesday night for a 2-0 lead in the first-round playoff series.

Harden, who recorded his third career playoff triple-double, had 25 points by halftime in a game the Jazz were all but out of after the first two quarters.

Game 3 is Saturday night in Utah.

It’s the second straight season in which Houston has met Utah in the postseason, after facing the Jazz in the second round last year. The Rockets also won Game 1 of that series easily before losing the second game at home. They ended up winning the series in five games but talked about the importance of maintaining focus after their 32-point win in Game 1 this season to avoid another such letdown.

It was clear early that they wouldn’t have that problem this time around.

Harden controlled the game from the start as the Rockets raced out to a 39-19 lead after a first quarter where he scored just two points fewer than the Jazz. Houston made 6 of 13 3-pointers in the first and Utah hit just one of its 14 tries. The Rockets didn’t let up in the second quarter and had pushed their advantage to 70-44 at halftime.

The Jazz got 17 points each from Ricky Rubio and Royce O’Neale. Second-year star Donovan Mitchell vowed to do more after scoring 19 points in Game 1, finishing with five turnovers and no assists. He did have more assists, dishing out six, but managed just 11 points on 5-of-19 shooting and had four turnovers as the Jazz head home needing to turn things around quickly to avoid a series that looks to be headed for a sweep.

Houston’s big early lead was also helped by 4-of-5 3-point shooting in the first half by P.J. Tucker and 16 points from Eric Gordon, who made three 3-pointers. Gordon didn’t score after halftime and Tucker added four points.

The Rockets had a 15-point lead midway through the second quarter when Harden made a 3-pointer, and on the next possession banked in another one as he was knocked to the court on a foul by Thabo Sefolosha. Harden watched the ball go in as he sat on the court and did a little shimmy with his shoulders. The play drew a roar from the crowd and the video boards flashed to a fan holding a sign that read: ‘unguardable.’ before panning to former Rocket star and Hall of Famer Hakeem Olajuwon, who raised his arms and smiled.

Harden missed the free throw but he’d still helped the Rockets push the lead to 52-31.

The Jazz got within 17 on a tip-in by Jae Crowder with about four minutes left in the third, but Houston made the next seven points, highlighted by a 3 from Harden, to make it 90-66 about 90 seconds later.

The Rockets were up by 28 entering the fourth quarter and had a 97-73 lead when Harden entered the game for the first time in the fourth quarter with eight minutes left. His 10th assist came with about 3 ½ minutes to go when he found a wide-open Kenneth Faried, who finished with a dunk to make it 107-87.

(At) Boston 99, Indiana 91: Kyrie Irving scored 37 points and the Boston Celtics rallied late in the fourth quarter to take a 2-0 lead in their best-of-seven, first-round series

Coming out of a timeout and with a chance to tie, the Pacers’ Wesley Matthews threw an inbounds pass into the bench on the other side of the court with 12.1 seconds left. On the ensuing play, the Celtics’ Al Horford passed to Jayson Tatum, who was fouled on a two-handed dunk. He completed the three-point play to make it 97-91 with 8.8 seconds left.

The Pacers turned it over again and the Celtics were able to close out the game at the free throw line.

Tatum scored 26 points, including a thunderous dunk down the stretch to help punctuate a 10-0 run by Boston over the final five minutes.

Game 3 is Friday in Indiana.

Darren Collison scored seven points during a 10-0 run that gave the Pacers a 70-58 lead in the third quarter as turnovers began to pile up for the Celtics.

Indiana led 79-68 entering the fourth. Horford opened the final period scoring on a hook shot in the lane and Tyreke Evans responded with a 3-pointer on Indiana’s first possession.

But then Boston caught fire, using a 16-0 run, including eight straight by Irving, to take an 86-82 lead with 5:04 to play. Indiana missed 10 straight shots during the run, finally breaking a nearly eight-minute scoring drought with a 3-pointer by Matthews in front of the Celtics’ bench.

Bogdanovic hit a 3-pointer from virtually the same spot as Matthews to put the Pacers back in front. Gordon Hayward responded with a jumper, before Bogdanovic hit another 3 over Horford that made it 91-89 Pacers with 2:16 remaining.

Following an Indiana miss, Tatum connected on a 3-pointer from the corner. And after Horford blocked Bogdanovic at the rim, Tatum found a cutting Hayward for a layup and the Pacers were undone by their late turnovers.

Horford was a game-time decision with an illness, but was able to remain in the Celtics’ starting lineup. He was noticeably a step slower at the outset and didn’t’ take his first shot until late in the second quarter. He didn’t score his first points until the fourth, finishing with four points, 10 rebounds and four assists for the game.

After both teams struggled from the field in Game 1, they combined to hit 10 straight shots to open Game 2.

The Pacers shot 65 percent in the first quarter, but were just 7 for 20 from the field and 0 for 7 from beyond the 3-point arc in the second. The Celtics seized on it, outscoring them 23-17 in the quarter and taking a 52-50 halftime lead.