Wojo: Pistons blasted by reality, and must change something

The ability to retool the roster is constricted by some onerous contracts, including Andre Drummond's.

Wojo: Pistons blasted by reality, and must change something

Detroit Pistons owner Tom Gores speaks after the Game 4 loss, completing the round one sweep by the Bucks, about the team and the future The Detroit News

Detroit — It was a mismatch in every way, as big a mismatch as you’ll ever see in an NBA playoff series. Even with an incredible effort from Blake Griffin in front of noisy home crowds the last two games, the Pistons weren’t close, aren’t close, and have to know it now.

The question is, what are they going to do about it?

Owner Tom Gores didn’t sound like a guy planning sweeping changes, and remains steadfastly opposed to tanking, as he talked shortly after the Pistons were blown out again. It’s too early to know what shakeup is even possible, but let’s hope the Pistons aren’t delusional. Milwaukee completed the four-game sweep with a 127-104 thumping, graphically showing why it had the best record in the league, winning by an average margin of 24.

The Pistons snuck into the playoffs and were dismissed like unwanted party crashers. The Bucks showed little mercy, and the Pistons got little respect. They probably weren’t physical enough to earn it, but the Bucks finished with a staggering 41-12 advantage in free-throw attempts. The fans howled and so did Dwane Casey, but when the howling ends, the gaping talent holes appear.

If there’s a positive, it’s that Griffin reaffirmed his standing as a passionate, determined superstar. It’s a sobering positive, because even with Griffin posting arguably the finest of his 10 NBA seasons, the Pistons remain stuck in the middle. Something has to change because this team isn’t nearly good enough, and outside of a trade or an astute first-round pick, I’m not sure how it gets better.

Andre Drummond remains a one-dimensional puzzle, a dominant rebounder without an offensive game. He bounced back somewhat in the finale and struck a conciliatory pose afterward, hoping he’s here to stay.

Drummond bounced back after a subpar Game 3 but the Bucks swept the series. The Detroit News

“I don’t know what goes on in the front office, but obviously I love playing with each and every one of these guys here,” Drummond said. “It’s a helluva team, a very enjoyable season for me. I think we played very, very well.”

Casey had similar positive comments, and so did Reggie Jackson. Again, you hope they’re not talking themselves into something that doesn’t seem logical. By playoff time next season, Griffin will be 31, and who knows, he might have another transcendent performance in him. Hobbling with a sore left knee, he scored 22 and 27 points in the two games at Little Caesars Arena, and when he fouled out Monday night, he departed to a standing ovation.

It was a glimpse of what can be here, but it was too fleeting to be considered a prelude. Griffin has proven to be someone a team indeed can build around, but Jackson will enter the final year of his contract, and outside of Luke Kennard, there aren’t any shiny young pieces on the roster.

Gores and players talked about adversity and injuries, but that’s an overstatement. Yes, Griffin missed four games down the stretch and the first two playoff bouts in Milwaukee. But he played in 75 games. Drummond played in 79. Jackson played in all 82.

Whatever adversity the Pistons faced, much of it was self-induced, with poor shooting and inconsistent defense.

“We had a good stretch during the season when we were a powerful group,” Gores said. “The biggest thing I’m happy about is, we figured out how to get through adversity. That’s the culture, and Dwane did a great job. But it’s not enough, we want to win. We got in the playoffs and didn’t match up great with Milwaukee. We’ll have to regroup and see what we did right or wrong.”

“Right now, we’re just absorbing this, and we’re gonna look at it,” Gores said. “The main thing is, I think we made progress. I like the way the city of Detroit did stand up for our team, they were loud. Our fans did a great job, and at least we gave them a taste of what it can be.”

It was a nibble, and perhaps the most important development is that Griffin showed he was engaged with the city and the team. He said he wouldn’t need surgery on his knee and should have a full summer of training. He praised his teammates for their selflessness and sounded like a guy committed to the process here, whatever it may be.

“Blake played his heart out with basically one leg, gave everything he could,” Casey said. “He kept playing until he couldn’t play anymore, and he has meant so much to our team. He just gave a passionate speech in the locker room about how proud he was to play with these guys and the future he sees with the young players.”

You have to find hope in small doses with a franchise that hasn’t won a playoff game since 2008, and just set an NBA record with its 14th consecutive playoff loss. That’s not all under Gores’ watch, although two sweeps are.

In the immediate aftermath, there were no hints of panic or signs of major upheaval. Part of that is because the season just ended. Part also might be tied to the untenable nature of contracts, with Drummond due two more seasons and $56 million.

Gores spoke for several minutes on the court and called Drummond “an underappreciated player in the league.” He also refuted reports he had previously nixed trade offers for Drummond, saying, “I don’t want to discuss that, you probably have the facts wrong.”

But on the issue of whether the Pistons should have tanked the season for a higher draft pick, or have any plans to do so, the owner dismissed the notion quickly.

“Oh no, I just don’t believe in the idea, whatever you want to call it, tanking, losing,” Gores said. “We need a winning culture here, and let’s just see what happens. I don’t think sports is about that, you can’t get on the court and think about losing.”

Fair enough. With a guy like Griffin, a complete overhaul is problematic. But if the roster can’t be dismantled, it needs to be radically modified. This group went about as far as it could, and remains far, far away. 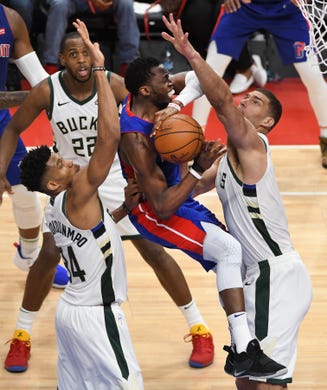 Pistons' Reggie Jackson has no where to go running into the Bucks' defense of Giannis Antetokounmpo, Khris Middleton and Brook Lopez late in the fourth quarter. Daniel Mears, Detroit News
Fullscreen 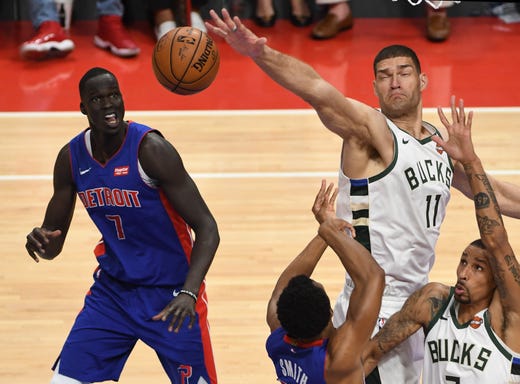 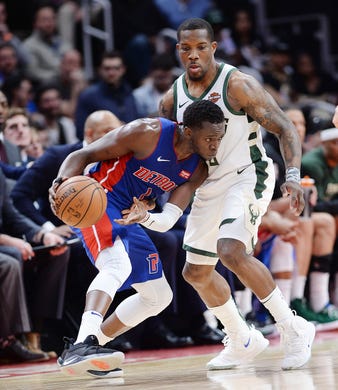 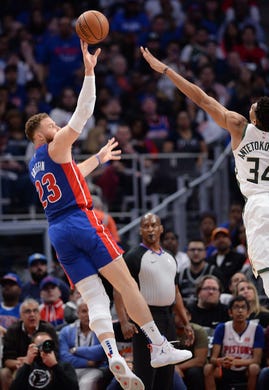 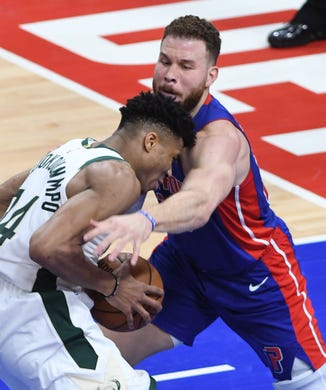 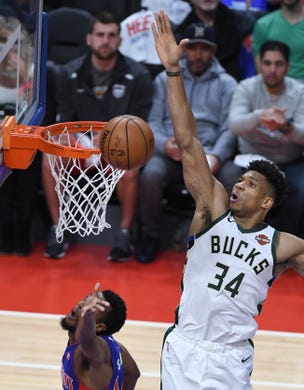 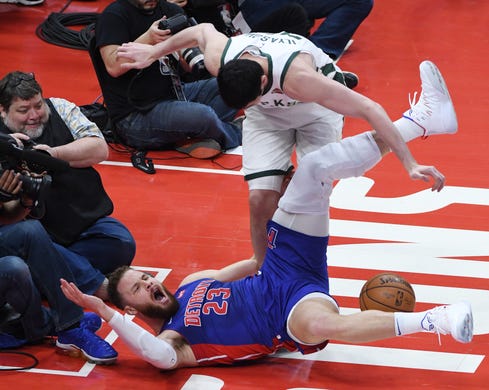 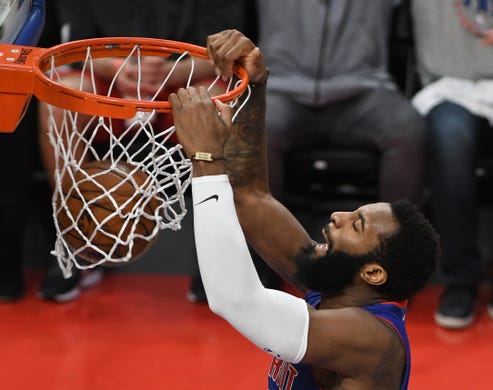 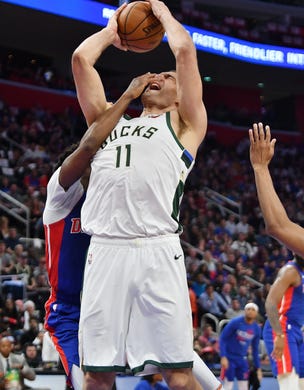 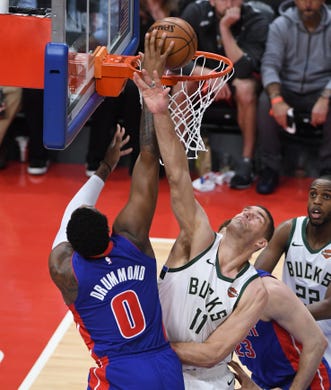 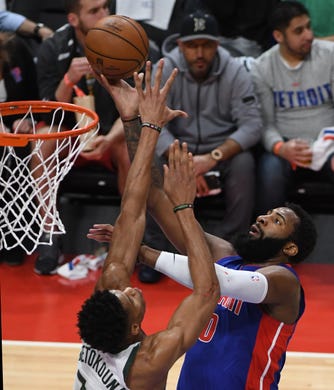 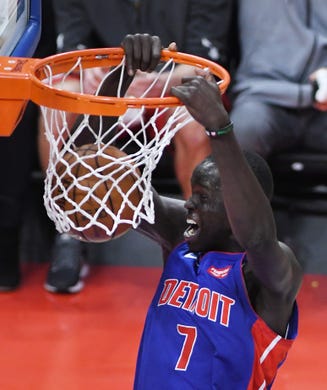 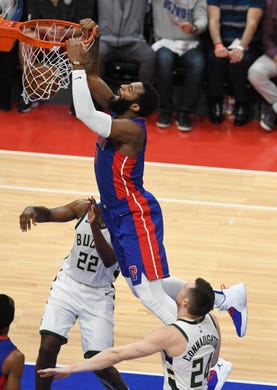 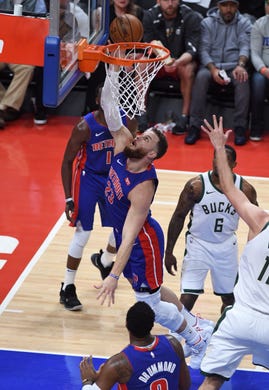 Pistons' Blake Griffin reacts after what appeared to bye a Detroit steal is a Detroit foul in the third quarter. Daniel Mears, Detroit News
Fullscreen 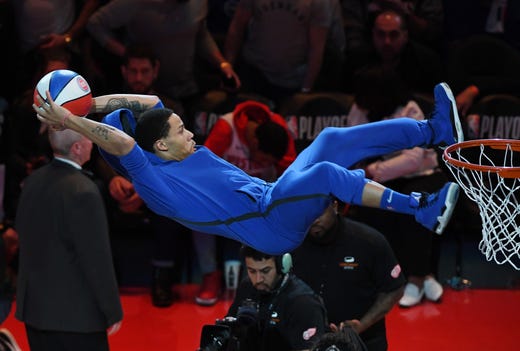 Somehow the basketball ends up in the basket, without anyone dying during the third and fourth quarters aerobatic show. Daniel Mears, Detroit News
Fullscreen 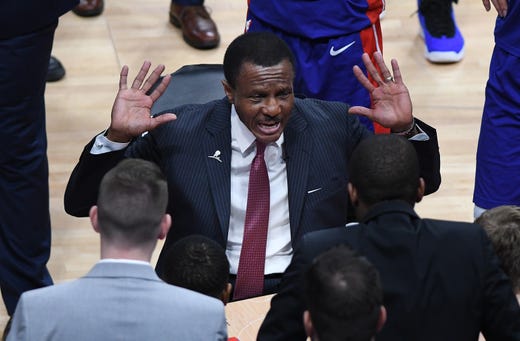 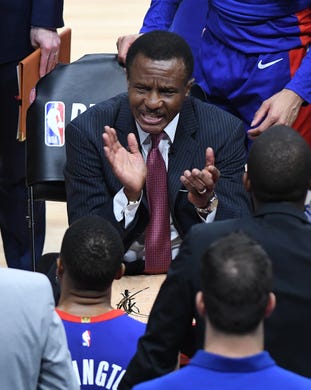 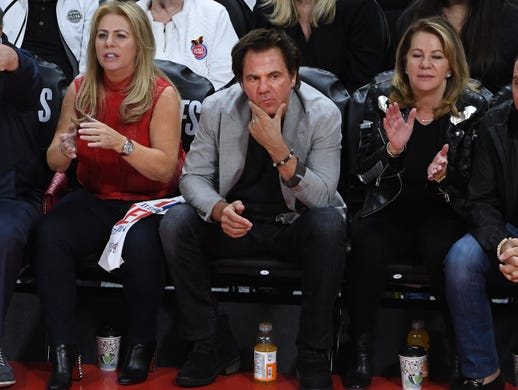 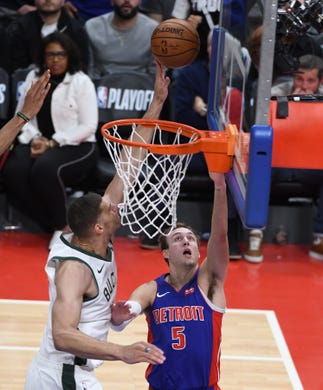 Pistons' Luke Kennard's break away layup is blocked against the board by Bucks' Brook Lopez in the fourth quarter. Daniel Mears, Detroit News
Fullscreen 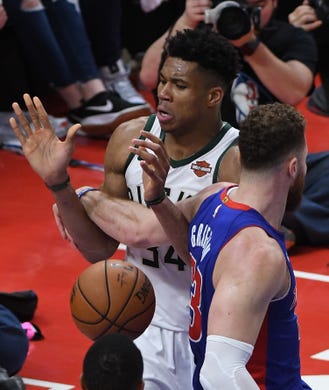 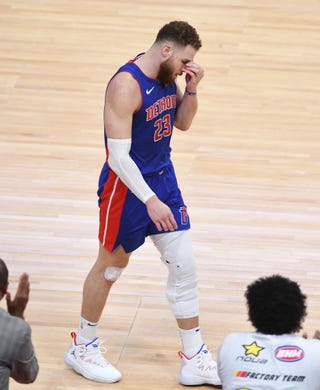 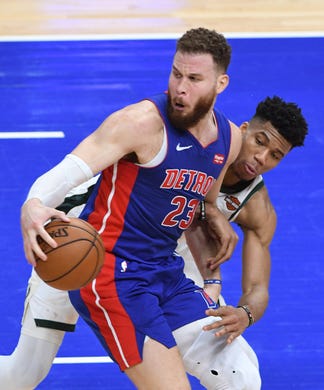 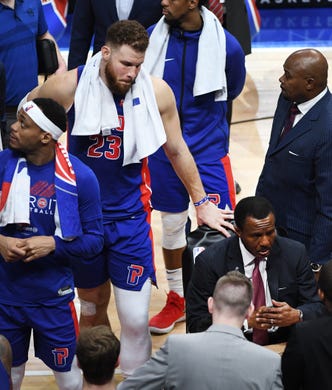 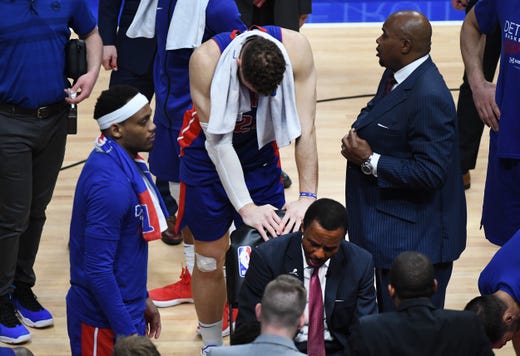 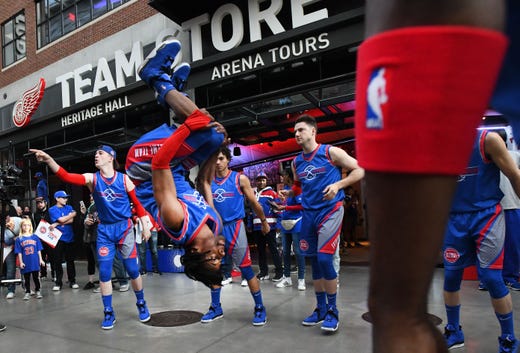 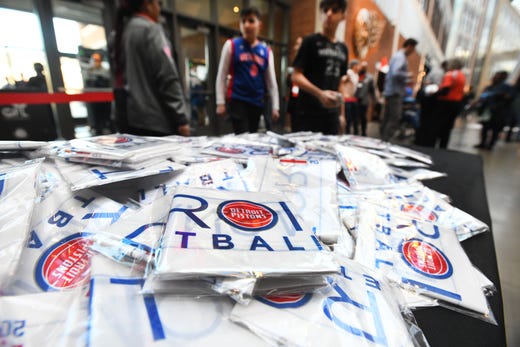 Blow-up noisemakers greet Pistons fans as they make their way into Little Caesars Arena for Game 4 of the Pistons vs. the Bucks. Daniel Mears, Detroit News
Fullscreen 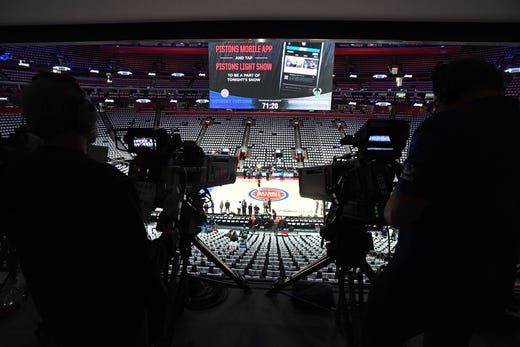 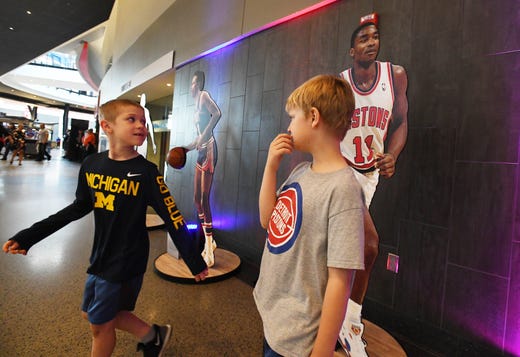 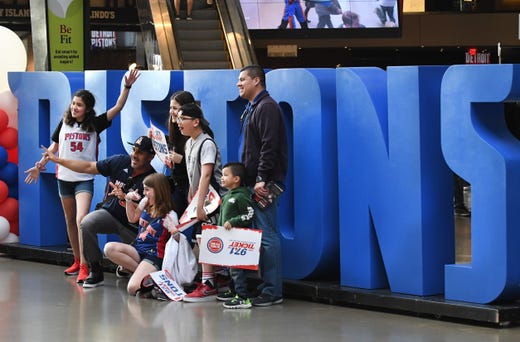